Jeepers! This is taking quite awhile, isn’t it? Of course there was Canadian Thanksgiving this weekend. We had a lovely family dinner at the bro’s. MMMMM…I lurve turkey. Now I’m wishing I had one for myself. (I think we’re volunteering for Solstice/Christmas this year though so I’ll still get my chance.) My daughter-in-law made her famous pumpkin pie and we also had commercial cakes and a delish chocolate/graham cracker square from Nana so lots of desserts! I had some of each. Of course.

I am Giving Thanks this year for my lovely warm supportive family and for my recovered skin, particularly my hands and feet. What better could one ask for?

Right! Back to the vaycay. We were heading up the Oregon coast for the last half of our 3 weeks and we managed to travel every inch of it. Our first night was at Harris Beach, just north of Brookings: 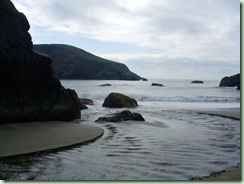 It’s a very photo-friendly beach judging by the number of pics I’ve taken over the years! There’s a steep hill down from the campground to the water so we decided to take our bikes. It was here that we discovered that T-Man’s BionX computer had leaked under the plastic bezel in all the rain and was swimming in water. Not a good idea to turn it on! So he had to ride like an ordinary bike until we could get it dried out. He carefully took it apart (we fortunately have a fairly comprehensive toolkit in the van) and dumped out what water he could and then put it open to dry. It spent some time on the windowsill in the sun and some time in front of the heater’s fan. Took more than a day but it finally dried out enough to work again. Yay! It got a circling of electrician’s tape for the rest of the trip and a plastic bag over top while we drove. Mine was just fine, thank goodness.

Next we were going to stay at cute little Humbug Mountain but the state campground was closed for renovations. It was quite foggy especially in the mornings so we bypassed Cape Blanco, the most westward part of the coast, because we were sure it would be socked in with rain and fog. We continued on to Bandon instead and camped at Bullard’s Beach were we found this little guy: 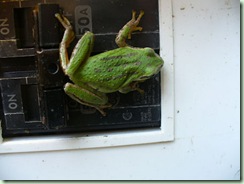 and a bunch of his relatives hiding under the plug-ins by the light to keep warm. We were happy to have the plug too, though the second day we were there had better weather.

This state park has quite a hike to the beach over the dunes and another 2 miles along it to the Coquille River lighthouse on the North Jetty, across the river from Bandon. Our bikes came in very handy for the trip and we finally got a chance to go up into the lighthouse: 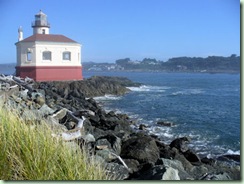 It was hard to see out the windows because they were so etched by the salt and wind and therefore need replacing every few years. You can see why, when we hiked out near the end of the North Jetty: 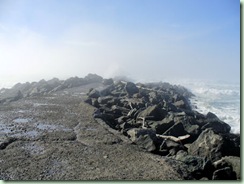 The waves were high and though the sun was shining there was still some fog around. We didn’t go much further than this.

We did go into Bandon, but we drove because the bridge was under repair and there was only one lane open at a time. We looked around Old Town, bought a huge lunch of fish & chips (delish) and fudge (also delish but we didn’t eat it until later) and hiked up the hill to The Wool Company, where I only bought a Spin-Off. Such self-control. The hike helped to wear off some of the lunch though! We never even ate a proper dinner that evening because we were still stuffed. (US restaurant portions can be a bit overwhelming at times. No wonder there’s an obesity problem. Yeah, I know we didn’t have to eat it all. We didn’t.)

After our fun time at Bandon we moved on to one of our favourite places, Carl Washburne State Park. Unfortunately the weather pooped out on us again. This part of the coast is quite damp especially judging by the moss covering everything in the forest with a thick layer. We managed to get a good walk in the first day despite the intermittent sprinkles but the second day we spent pretty much confined to barracks in the van. We both read a whole book each! It was still foggy when we left but the sun was peeking out a bit: 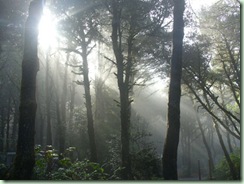 This time we headed to Newport’s South Beach. 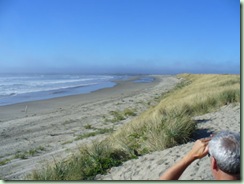 The park has great paved bicycle trails which we made full use of. We parked the bikes and hiked out on the South Jetty, which was hard because it’s just a jumble of rocks, not paved, so we didn’t go too far. We spent lots of time watching a bunch of sea lions feeding and playing in the surf between the jetties. And we saw pelicans and cormorants: 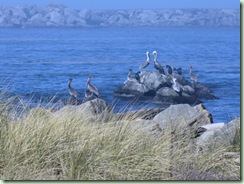 Then we decided to carry on to the Oregon Coast Aquarium, which handily was on our side of the river and not far on our bikes. We started with a yummy lunch outdoors and then checked out the exhibits. 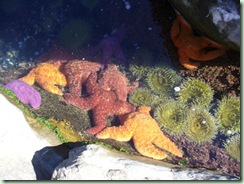 Don’t you love the colours of these ochre stars and anemones? I was sorry that part of this pool (with a realistic tide wave action) was in the shade so I couldn’t capture them better. We also went through the shark tunnel (sharks overhead!) and saw sea birds like tufted puffins and auklets up close and underwater. I also totally love the jellies: 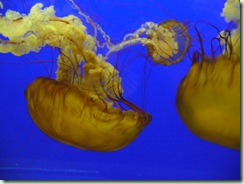 These big ones are especially pretty, Pacific sea nettles, but they can sting. (Apply vinegar to neutralise!) They like to swim upside-down a lot. I didn’t get a good photo of the moon jellies since they weren’t lit well and are nearly transparent. This time they didn’t have my favourite egg-yolk jelly which we once saw when we had our sailboat. It was huge and had tentacles much longer than our boat! It’s a much smaller place than our Vancouver aquarium but it’s pretty fun.

OK, I have to go so the last (hopefully!) part will have to wait. It’s nice out again and I must go dig in the garden. More anon.