Nuts & Leaves (Minus The Nuts)

We did get some of our sweet chestnuts this year thankfully. But it was an off-year for the walnuts and there weren’t even enough squirrel-munched ones to use for dyeing. I still have some in the freezer from a couple of years ago though so no biggie. The hazelnuts also were not abundant and of course the Evil Fuzzy-Tailed Scrats got the few that were any good. T-Man and I (mostly T) have been raking up the leaves for the last few weeks but now they’re really falling in earnest. It’s super windy and wet today – another day of Sideways Rain and typical November murk. It’s supposed to be nice tomorrow so maybe we can get out there and work some more. It’ll be nice to finally get the yard all cleaned up for winter. And we haven’t had any frost yet though they’re saying we could have a sprinkle of snow later this week.

So I realised I had forgotten to post a recent FO. 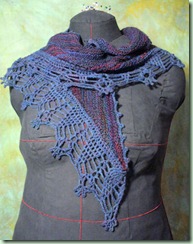 Pattern: Knitting – my own design. 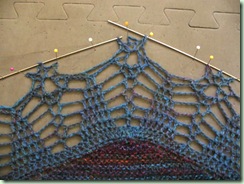 Crochet – Used a picot stitch on the top edge and a single crochet around the other two sides, then carried on with #170 from “The Complete Book of Crochet Border Designs” by Linda Schapper.

Comments: This took longer than it should have to complete due to the Itchy-Peelies affecting my hands. I finished the spinning of the superwash right after I received it as a test gift from Andrea but then put it aside for another month until my hands were better. Finished up the knitting while we were away on vacation in September but waited until we got home to hunt up more yarn and pick a suitable crochet edging pattern. Edging it with crochet made a much more substantial piece though it’s still more of a scarf than a shawl. 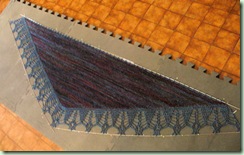 Am I the only person who is annoyed that you can’t put a project in Ravelry that is both knit and crocheted?

So now what am I up to? I’ll save my second FO for next post, but I’ve also been beavering away at my Happy Legs tights. It’s going to be fun to see whether or not I run out of yarn! I do have some more of that particular brand but not the same colour. It will be up near my waist and consequently won’t show though so it doesn’t really matter – at least to me.

Well I seem to be doing much better so far with the blog posts this month, aren’t I?