I spent a goodly portion of yesterday morning rechecking and tweaking my paper pattern for Vogue 8323 view B. That’s probably 3 days total spent on fitting! Yikes. But it was a fairly major job. Hope you can see the difference between the original side front (right; not cut out) and mine (left): 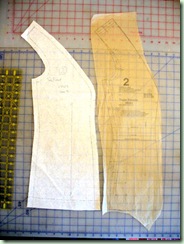 Surprisingly I mostly only needed to adjust the side front and back pieces. The centre front piece just needed a bit of length added for the Full Bust Adjustment (aka FBA), the top of the sleeve needed a sliver shaved off and I didn’t do anything at all to the centre back piece. They were otherwise an untouched size 12. I did end up taking about 1/4” off the FBA when I tried it on. Guess the inch I thought I needed was too much? Otherwise it was perfect as re-drafted. Amazing.

The book “Fit for Real People” revised version by Pati Palmer and Marta Alto is a must-have for this. Couldn’t have done it without all the helpful techniques they have developed over many years. Apart from the exhortation to use Scotch Magic Tape that is. I did not have a good result after pressing it with a hot iron (no steam – exactly as was recommended) because it buckled and shrank. It would be fine if you never ironed over it but you need to get the pattern as flat as possible after pin-fitting or folding. I ended up using pins to slash and fold my pattern alterations instead and then retraced the final version on fresh tissue paper.

Now I’m nearly done sewing my top and…miracle…it fits the way I wanted and it’s really quite attractive! I will definitely be making more versions of this top with different necklines and sleeve lengths, maybe even making it into a tunic length. I used both sewing machine and serger to finish the many inside seams but used a twin-needle topstitch to stitch the hem and cuffs instead of using the coverstitch on my serger. I like the simple look and slightly raised line of the twin-needle stitching and it was easy to do. It’s a major PITA to change the serger over to coverstitch and not so easy to work on a narrow tube like the sleeves. They would have to be done flat and then seamed but I don’t like the effect at the open cuff edge. Much easier to put it on the open arm of my sewing machine instead. I also stitched a narrow ribbon to reinforce the shoulder seams and tacked the ends of the folded cowl seams to that to anchor it. I wanted very non-stretching shoulders.

The garment had one leetle teensy problemo though: the shoulders still slipped off because the design included extra neckline fabric front and back to add fullness to the cowl. See those drape lines in the sketch? 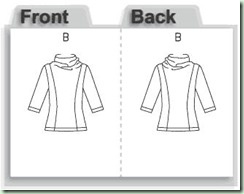 There’s nothing to hold that in place to prevent the shoulders from dropping down off my body. Oh dear. What to do? I first thought of a ribbon inside across the back of the neck but that didn’t feel comfortable and you could catch glimpses of it down the cowl’s tube. This morning just as I was waking up it came to me. Bra strap keepers! Of course. Why doesn’t this pricey Vogue pattern include directions for this very necessary piece? Doh. Is this another one of those never-actually-been-test-sewn patterns? There is only a sketch and no garment photo so that may be true. However, many people have sewn the various views and left their comments on PatternReview for my edification. Unfortunately not very many made view B.

So now I need to make keepers with seam binding and snaps and stitch them to the shoulder seam at the armhole edge. Using self-fabric is out because it’s much too stretchy. Here’s the finished top on Debbie: 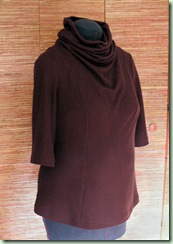 Not a great photo – sorry – and it definitely looks better on me! Poor Deb has no arms. But it gives you the idea I hope. Just skims the body and gives a hint of shape. First garment of my new 2011 Wardrobe Makeover: done!

Now off to plant those darn seeds I’ve been ignoring. It’s warming up, shoots are growing and buds are bursting. Spring is here despite the soggy rain we’ve been having nearly nonstop for weeks. Plus I need to start some laundry.