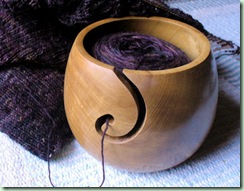 Isn’t that nifty? It’s a knitting bowl, lovingly made by T-Man on his lathe just for me. We got the idea from a photo of a pottery version - it holds the ball of yarn in progress and keeps it from rolling around. It’s quite heavy and bigger than it looks in the photo and holds a full-sized yarn cake. The curly slot is wide enough for pretty much any thickness, even chunky yarns. I love it! T took it to his woodturners’ guild meeting and there was quite a buzz of interest from them so you may see more of these around in future. As you can see, it’s already in use on my Abotanicity Tunic. Which is coming along nicely, but slowly.

Meanwhile I’m much farther along on my mad sewing and pattern stash sorting project than I was a few days ago. I found I have enough fabric to sew at least a couple of dozen garments! Yikes! That should keep me busy for quite awhile, huh? Some of this stuff has been marinating in the stash for decades. Or in the case of several pieces, marinating in somebody else’s stash before mine. Sometimes materials just don’t know what they want to be when they grow up! Now I have a lot of pattern tracing, adjusting and tweaking to do before I can cut anything out. It seems to take longer to get something to fit me than it does to sew it. Oh well. Better to take the time upfront than try to fix it in the middle of stitching it together. I’m so excited to have some new clothes for spring and summer! I’ll share more when I have something better to show than the heaps of fabrics and pattern envelopes all over the studio.

Yesterday Milady Daughter and I took baby Rosebud (nearly 4 months old now!) to the hospital clinic again. She has been having some problems with blisters on her poor little foot from the boots. MD was doing everything she could to help while still keeping the boots-and-bar on 23 hours a day. Tough job! We don’t want to lose all of the progress that her curly foot has gained and MD was gratified that the staff at the clinic praised her for her careful diligence. That made her feel a little better though sometimes it feels like torturing a poor innocent baby. Unfortunately it has to be done so her foot will be as normal and functional as possible. She will be grateful in the end. But meanwhile, they gave her some special sticky skin pads to cover the ouchies until they heal. Hopefully that will work better than gauze or bandaids or moleskin. We go back next week to check on progress.

There is a real trick to getting Rosebud’s shoes on properly too – not too loose or her foot will slip but not too tight or it hurts her. Try to buckle and tie little shoes on an unhappy baby! Even the staff had difficulty so I feel somewhat better about my complete inability to get it right. However Milady Daughter is now an expert after several weeks of practice. No sign of the sparkly purple bar yet though. We’re still waiting for the hospital to get them in. The shoes will still be an issue but at least the bar will just click into place instead of screwing tight the nuts and finding that the bar has slipped out of its proper angle. The labours we do for our little ones, hey? Totally worth it.

Well, I’m currently avoiding the laundry and vacuuming. Instead it’s back to the studio…

The bowl is gorgeous - show that off at your guild and you will be getting many orders!