Whew! That was fun but exhausting! T-Man and I had the bigger Grandbeasties over on Friday for a sleepover while their parents went dining and dancing. (Lucky them!) This was the first time we had both kids (they’re 4 1/2 and nearly 7 now) overnight at the same time. We don’t have a spare bedroom – because our craft stuff resides in all the other bedrooms besides our own – but the living room couch pulls out to a double bed. They are pretty good sleepers and we wisely wore them out as well as we could first so there were no midnight shenanigans. Stargazer woke up really grumpy for some reason though. He’s usually pretty sunny in the mornings like I am but I suppose everyone is allowed an off day every once in awhile.

Did you know that my refrigerator is really an art gallery? It’s covered with drawings and paintings, up until now all of them by just one artist – the lovely and amazing Super-Princess. However, I finally scored a painting by the up-and-coming new artist, Stargazer! Hooray! And Grampa T-Man got a fabulous book by Super-Princess featuring all of the My Little Ponies. I especially loved watching Stargazer mix paints: “Hey! Red and green makes…brown!” So cute. He’ll be starting kindergarten in September. Time flies when you’re having fun.

After they left on Saturday we got a visit from the other set as well. We were heading out to a grand-nephew’s first birthday party so Milord and Milady and baby Rosebud tagged along. Unfortunately, what I didn’t know was that the party venue had changed from Stanley Park to a bookstore in North Van because of the iffy weather. So we wandered around the park looking in vain for the party. Sheesh. And it wasn’t raining either! Nothing like sending the change by impersonal Evite email only a few hours before the party. I never had an opportunity to check it before we left. A phone call might have been more definite. Oh well. Stuff happens. I did receive a heartfelt apology from my sister later and all would be forgiven – except that we weren’t actually mad about it. We were sorry we missed them though.

It was a lovely visit with Rosebud and family anyhow. I managed to finish the last pair of baby socks and give them to their recipient (who tried to eat them but dropped them on the floor instead): 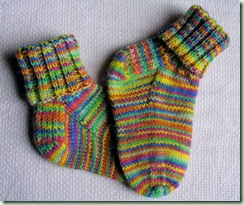 Comments:  This slightly stretchier yarn should be comfortable in her boots. She keeps growing so these are just a little larger than previous pairs. Unfortunately this yarn has less yardage per ball than the usual sock yarn so I will likely have to create “decorative” toes for the second pair! I’ve already started on them.

T-Man declared that Saturday would be considered his Father’s Day because he spent time with all of his offspring and his offspring’s offspring. Made him very happy! Me too…

Which was good because on Sunday we went to our local Car Free Day: 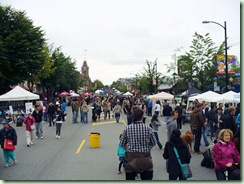 Don’t know if you can see in the photo, but those masses of people in the street just goes on for blocks and blocks up the hill. The area was longer but I think not as interesting this year. No cops blowing bubbles. (They’re still upset about the riots last week. I think we all are.) Not as many funky activities. More merch booths and food stands. The amplified (and mostly canned) music drowned out the unamplified musicians. It was family-friendly but missing the wacky edge that I enjoyed so much last year. We did like the belly dancers and the flat-track roller derby skaters though. I was hoping to spend some time spinning in front of my local LYS but there were only two knitters and someone helping small kids weave but there was nobody there that I knew so I didn’t bother. The other LYS was pretty crowded because they had less space available and they were also unfamiliar faces. Am I getting out of touch with the local fibre scene? Quite possibly. Even my Ravelry knitting group weren’t in evidence in their usual coffee shop venue. We enjoyed our walk anyhow but it’s hard to stroll so slowly in the crowds when we’re used to keeping up a much faster walking pace.

Meanwhile I cut out one pair of capri pants and 2 pairs of shorts out of 2 metres of stretch textured cotton knit (black of course) and am currently sewing them. So far they are rather loose particularly on the legs even though I began with a size smaller than my measurements would dictate. Jeepers. My fluffy middle vs skinny legs issue again. At least it’s relatively easy to take them in more. Details later. I need to accomplish something real today besides pixels on a screen.