I’m back! Well, actually we’ve been back since Wednesday but we’ve been so busy in the garden since then that I haven’t had any real blogging time. Somehow with T-Man around I manage to keep busier than normal! Sheesh. I’m going to have to watch for this tendency when he retires. (Soon!) We’ll have to develop a New Normal. Heh. 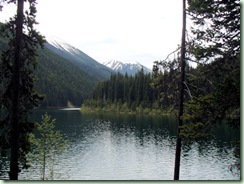 Well Manning Park was fun though cold and damp for at least the first few days. Saturday night it even froze as you might imagine by the amount of snow still on Mount Frosty there. We all froze too even though I had an extra quilt on top of my heavyweight sleeping bag. The Rosebunting kept Rosebud fairly warm but she sure didn’t like not being able to munch on her hands. She was so layered up that she couldn’t even bend her arms! There were campfires going even during the day which is unusual for us. Stargazer wouldn’t keep his coat on but at least his Granny-knit sweater kept him warm: 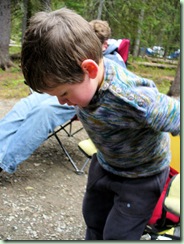 I’m amazed it still fits him he’s been growing so fast. The trail through Strawberry Flats was even more snowy than usual too but we managed to get to our traditional stopping place where we had our traditional snowball fight. 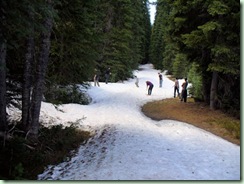 This is where the path got too covered in snow for easy walking. It felt good that I was fit enough to be able to truck Rosebud this far in her Snugli: 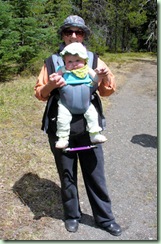 She likes it when she’s facing front to see everything. She even kept her hat on! I wisely swapped with her dad for the return trek though. 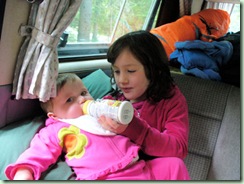 By Sunday night however Ms Rosebud had had it with camping and kept waking up every hour crying. So they all packed up and Super-Princess fed her a last bottle before the trip home. Then the remaining grandbeasties went fishing: 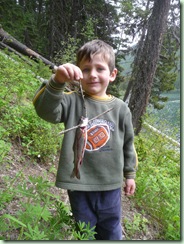 Stargazer was so happy to catch his Whopper! (There was a little help from Grampa with casting out.) He’s been going on and on about it since last year when his sister got the big one. No slouch, she of course got one too: 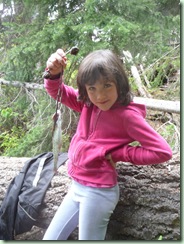 (Love the model pose!) He made sure to measure his against hers and declared that they both win. Too cute. Then they also went home Monday afternoon and left us to the peace and quiet for a couple of days. At least it warmed up somewhat. 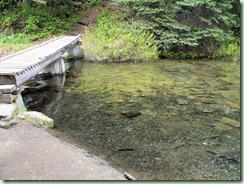 On Tuesday we decided to hike around the whole of Lightning Lake. This is the south end where we, um… got stuck. Perhaps it was those spawning trout that you can just see in the photo? Or perhaps the late snow melt clogging the upper slopes. Anyway, just over the little bridge and up the trail a short way we ran into a mama black bear and her yearling cub. Too close for comfort! So we had to turn around and go back to the Rainbow Bridge and by that time decided that a nice relaxing rest back at camp might be a better idea. Notice there are no photos of the bears. We were too busy retreating with alacrity! 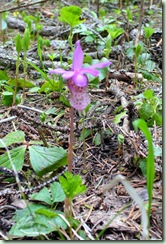 We did stop long enough to see lots of new growth in the forest: some pretty flowers such as avalanche lilies, paintbrush, arnica, and the not-so-pretty newly emerging devil’s club. This one is a fairy slipper orchid (Calypso bulbosa). So tiny and delicate.

Getting back on Wednesday turned out to be a tricky endeavour. We unfortunately left Manning about the same time as the huge mud slide happened on Highway 1 near Bridal Falls. They hadn’t got the warning signs and barriers up yet so we ended up having to turn around and go back 26 kilometres to Hope to get over to Highway 7, the narrow winding alternative route. Of course everyone else was going that way too! In total it took us 4-1/2 hours to get home – half again as long as it usually takes.

It was lovely that so many family members managed to make it this year. Besides our kids and grandbeasties, there were T’s brother and his family (including extra friends), a nephew and his 2 kids (though one got sick and had to be returned home), and our daughter-in-law’s dad. A total of 19! Nana was very glad she opted out because she would have been much too cold the first 2 days until it finally warmed up. 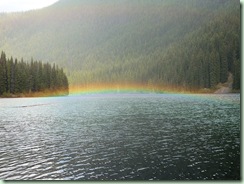 How do you like the new Rainbow Bridge that T-Man discovered?

Changing the subject abruptly, today is T-Man and my 40th wedding anniversary! We are celebrating by ourselves and have reservations at the Pink Peppercorn for dinner tonight. Yum. Yes, we were babies when we got married! Those who know us are not surprised that we’ve made it this far I’m sure. We’re a little bit grayer, a little bit fluffier around the middle and (I hope) a little bit wiser but otherwise we’re pretty much the same as we were then.

Right now though we need some groceries. The sun is out and life is good.

Yeah, poor you! Will summer never come? Though I shouldn't really complain because I don't much like it too hot anyhow.

Congratulations on 40 years of marriage. that's too cold for me to camp, I am glad that you had a good time.

Thanks for the kind congrats! Actually after the first 2 cold nights, it warmed up so much that we were too hot while sleeping with the heavier side of the sleeping bag on top. Skeeters not at all bad either. Nearly perfect - except for a few too many bears!

Congratulations! I just drove through Manning on the 4th and it was Hot! I was supposed to have driven last Wed. - good thing I had a car problem before I started out! Hindsight.

Thanks for the congrats, hon'! Yes, hindsight is a great thing. Too bad it's always later though, huh?

BTW, so what's with Highway 1 and things falling on it? Yesterday it was massive amounts of power lines causing traffic nightmares and power outages everywhere. We were fine though. You obviously missed it too!