How Can It Be September Already?

My fingers are sore. I spent a goodly part of Wednesday afternoon stitching and stitching on the new screen for my VW van: 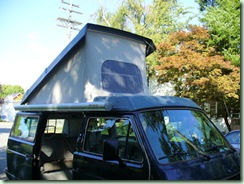 It took about 4 hours and I went over every seam twice to make sure it was going to last. I had to stand on the cooler to reach and even wore my sunhat for awhile until the sun shifted behind my walnut tree. I think it looks pretty spiffy if I do say so myself! If you’re wondering why I worked so hard on this, here’s the original screen: 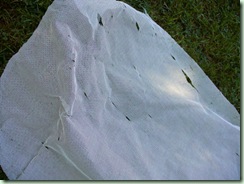 The new one is much finer and will keep out no-see-ums as well as mosquitoes, wasps, moths and other winged critters. The old one (ca1989) wasn’t keeping out much of anything! Hopefully it will be good now for as long as the van exists – or at least as long as the canvas top survives.

Then yesterday was our monthly Spectrum Study Group dye day. This time we played with madder and modifiers. My tussah silk yarn mordanted in rhubarb leaf came out a disappointing rose-beige for some reason. I suspect the madder needed to be stronger since we only used 7.5% WOF. Other yarns mordanted in alum came out somewhat brighter: 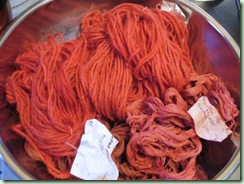 Not as intense as it could be though. After dyeing them we subjected various skeins to acid (vinegar), alkali (ammonia), iron and copper. Only the iron modifier made any real changes in the colour: 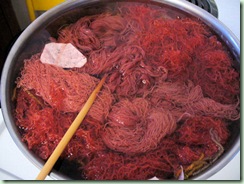 The acid modified yarns were slightly brighter than normal but the alkaline and copper ones didn’t change much at all – at least that we could see while they were wet. I’ve experienced much more dramatic differences in the past so I’m not sure what was going on unless it was just that the madder percentage was too low. I usually use 18-25% WOF so we used less than half that. I also usually get at least one or two exhaust baths from the stronger amount but this was completely exhausted right away. We used a finely powdered madder and unfortunately didn’t put it in a bag in the dyebath so now my yarn is full of madder dust as well as kind of homely! It’s still wet and I don’t have a photo yet to show you. I might just try overdyeing it with a little more madder to see what happens. Probably not until I get back from holiday though. I have things to do.

Meanwhile here’s a basket that Kirsten arranged of some of the yarns that she’s been dyeing during this year of Spectrum: 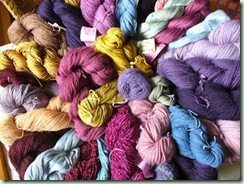 Pretty colours, huh? Who says natural dye colours are all boring and dull. And here’s a little bundle of hand-dyed weaving thrums that was lying around: 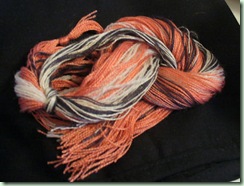 Today I was going to accompany Milady Daughter and Rosebud to get her boots adjusted but apparently Milord SIL has contracted mumps. Maybe. They’re still trying to confirm but meanwhile their little family is quarantined. They are certainly not wanted at Children’s Hospital! And baby Rosebud hasn’t had her immunisation for it yet. Cross your fingers that she has my natural immunity. Both my adopted siblings had it, one of them twice (once in each cheek), but I never caught it even before I had my immunisation shots.

So I’m planning to spend some time today carding and spinning more of the black Corriedale yarn. I’ve got half of what I need for T-Man’s Brownstone sweater but I’d like to have it all spun and wound into cakes before we go away. I might be asking too much of myself though. Won’t hurt to try! Every skein I get done means I can get further on the knitting while we’re travelling.