So true. And I really do try to remember that every day. I can’t say I’m a huge Apple fan (though I love Ruby, my iTouch) but I do believe ol’ Stevie came up with some great devices that literally changed the way we work, play and communicate. Gone too soon – he was 5 years younger than me. RIP, man. Cancer sucks.

Anyhow, I’ve been heating up the pixels to a boil and trying to organise, edit and recall what the heck I took pictures of and where for the next instalment of the Geezer Geyser Gazers road trip. It’s really hard! So many exciting things I want to include but either the photos don’t do it justice or it’s just Too Much Information. Regardless, I’m going to give you something rather than be paralyzed by my indecision.

Where did we leave off? Oh yeah.

Day 10 – Yellowstone, the highlight of a pretty amazing trip! This was the first national park ever and it’s one of the most special places in the whole wide world. Most of it is in Wyoming but a strip on the west is in Idaho and one on the north is in Montana. It’s huge (3476 sq miles to be exact) and mostly undeveloped but all the good stuff is easy to get to by road and/or short trail. There are 5 park entrances in total depending on which direction you’re travelling in. (At the gate they charge you $25 for a week’s permit which also includes Grand Teton.) From where we left Three Forks, Montana, there are 3 roads you can take to get there. Two get you to the “side door”, West Yellowstone, while the farthest one goes in through the north end, which of course is the one we took. We meandered through the cute little tourist town of Gardiner and through Roosevelt’s Gate (Teddy laid its cornerstone himself) into the park. We hit it just at the right time of year, when the crowds are less but the weather is still perfect. Or almost perfect. It went below freezing several nights in a row but heated up to toasty warm before 10am. Talk about your contrasts.

There are limited places to stay in Yellowstone and some campgrounds were already closed for the season. We dove into the first campground we came to, Mammoth Hot Springs, (which is the only one open all year) and at not-even-noon-yet just managed to snatch one of the last available campsites. We weren’t far from the main Mammoth centre but it was a stiff uphill climb (and we only found the trail later) so we drove the 180-degree switchback instead. Once there we were amazed at the large herd of elk that had taken over the lawn of the lodge for a siesta, complete with large buck nibbling the grass, and an equal herd of tourists snapping their pictures while being kept to a respectful distance by park rangers. So funny! We had just mentioned that we hadn’t seen any elk on this trip yet.

Even more amazing were the travertine (calcium carbonate) terraces just above the tiny town. See it way down there: 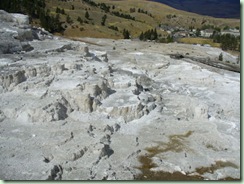 They were steaming sulphurous vapours and super-hot water was pooling and pouring down the levels like very elaborate (and stinky) marble fountains: 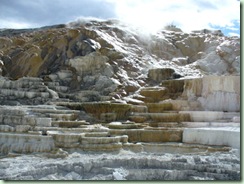 A complex system of boardwalks and staircases lets you see the lower section up close and a loop road gave us access to the upper terraces. This is the only place in the park that has this type of feature though we saw a lot more of the sinter (hydrous silicon dioxide aka geyserite) which here is in little walls forming pools that are either empty or full of very hot water: 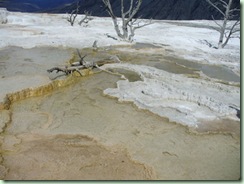 It looks like snow, doesn’t it? Especially with the dead trees embedded in it. Colours are added by bacteria that live even in the super-hot water. This was our introduction to the geothermal areas in Yellowstone and we were definitely impressed. Everyone who thinks that Old Faithful is all it has going for it are so wrong!

Day 11 - We woke up in the morning to an odd sound and peeked out the curtains to see that the elk herd of yesterday had wandered down to the campground and they were just outside the van: 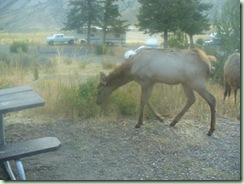 Photographed through the dirty window. I wasn’t going out there! Turns out the odd sound was this: 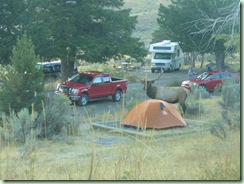 Mr. Very Large Bull Elk trumpeting his success at having attracted such an immense harem! Can you imagine how the poor guy in that little orange tent felt? He crawled out later after the herd wandered further away looking just a bit dazed.

After that exciting awakening we packed up and travelled about 15 miles south to Norris Junction. On the way we stopped here: 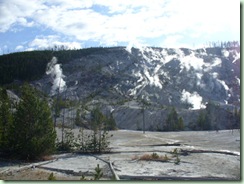 Roaring Mountain is right on the road and it was really steaming in the cool morning air. It actually does make a roar with steam vents all over it. The pool in front was dry but apparently sometimes fills up with hot water. You never know where you’ll come across steam vents in this park. Even at the side of a river. There are many areas where you aren’t allowed to walk for your own safety. People have been killed here by stepping in the wrong place. They even occasionally have to move the boardwalks when it gets too hot under them.

After securing a campsite at Norris, we decided to take a side trip to the eastern area, about 12 miles away. Yellowstone is actually a huge volcano caldera and has a large loop road that goes all the way around to the best sights: 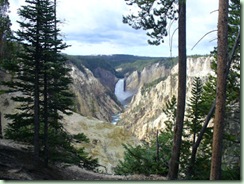 This is apparently the most photographed waterfall in the world, in Yellowstone’s Grand Canyon. So of course we dutifully took our turn with the cameras! The canyon is quite spectacular and we took advantage of trails on both sides of it including right up to the top of this same waterfall. We also drove further south to Canary Springs and Mud Volcano: 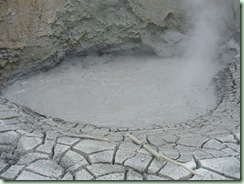 That’s about 15 or 20 feet across just to give you some perspective. It “blurbs”! There’s a number of other geothermic features here too including this favourite: 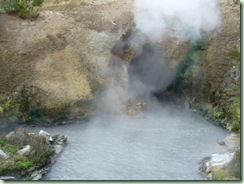 Dragon Mouth Spring. It roars and puffs out steam so that you might think a dragon lived in the cave! Across the road Canary Spring is bright yellow from sulphur and is the most acidic pool in the whole park. You had to watch out, even the parking lots have hot spots here: 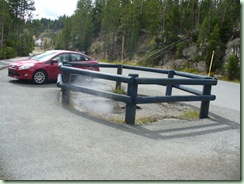 When we got back to Norris, it has its own geyser basin so we went to check it out too. This an overlook of the lower section, Porcelain Basin: 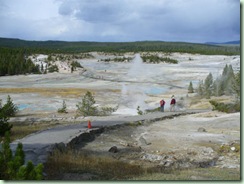 The pale colours are delicate on the white geyserite and acid-leached lava: greens, peaches and yellows from the bacterial mats, turquoise blues in the pools from refracted light. Coupled with the sounds of steam vents, including serious one that roared like a jet engine, and droplets of water condensing like sprinkles on your head, it was a most amazing place and we followed the boardwalks everywhere. The upper section, Back Basin, had lots more pools and geysers, including the well-known Steamboat Geyser, which steams and spouts innocently but is actually the world’s largest – except that it hasn’t gone off since 2005. No, it didn’t do it for us while we were watching either. Another one, Porkchop Geyser, was a continuous spouter until 1989 when it exploded. Now it’s just a steaming pool with jagged boulders. It was fascinating to learn that every feature has an individual character and that they change! Maybe today, maybe in 1,000 years. Or 100,000.

Gee-whiz. Here I’ve only gotten through 2 days’ worth this time! There’s so much more and we haven’t even gotten to Old Faithful yet. More when I get the right photos sorted out. I’ve got to get out to the garden while the getting is good. I managed to get the greenhouse cleaned out and the dead summer squashes and cukes composted. Much more awaits and Ruby is all charged up with podcasts to listen to as I work.