Yup. I’ve been up to my old tricks, fixing stuff just so I don’t have to go buy new ones. I’ve been repairing my shoes. First I finally got some slipper soles to fix my poor 2-year-old slipper socks. These are by Boye: 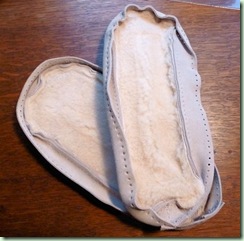 They’re suede leather with fleece insoles and little holes punched all around. Although they come with a simple pattern for both knitted and crocheted slipper socks, I just stitched my old ones in (after sewing up the holes in the bottoms - again!): 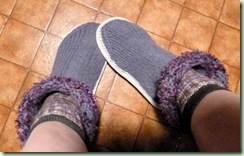 They fit perfectly! Even if they are rather blindingly white. One repair down.

Next I tackled my Birkenstocks. The cork soles were starting to come apart badly especially at the toes. I used some ShoeGoo which is great stuff! Stinky but effective. I poked as much glue into the cracks as possible using a bamboo skewer, lightly clamped the toes and waited until that layer dried. Then I wore a vinyl glove and used a finger to “paint” the whole of the exposed cork with another layer of Goo. They are much more stable and although they look a little funky (shiny!) are going to last a lot longer now: 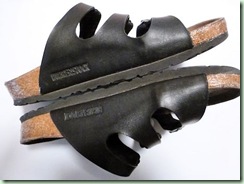 Then I fixed my poor old Blundstone Wedges. They don’t even make this style anymore. Maybe because of the crappy soles on these things. They were pretty much worn through and cracked right to the inner soles: 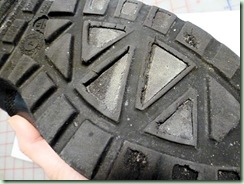 There were actual caves under there! Even though it cost nearly as much as new boots to get complete new soles put on, I would have done that except that the elastic gores are also wearing out. So not worth a major repair job. Instead, to extend their life a little longer I Gooed ’em: 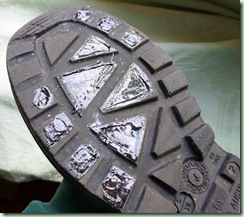 That’s two layers and I just might add one more to be good. I put a lot of kilometres on these bad boys! They’re the only black Blunnies I have at the moment. The other two pairs are brown and red which I love, but black is my go-to colour for shoes. Yeah, I know. I wear such elegant footwear, don’t I?

Now that I’m on a roll, I just might resurrect my ancient and extremely comfy rubber boots, locate the holes that I know are there and fix them too! My poor wellies deserve some TLC too. I’ve only had them for about 30 years or so. The spiders will be sad to be evicted, I’m sure.

So instead of buying new shoes, I bought a bra-making kit from Bra-Maker’s Supply (Hamilton, ON) instead. The pattern: 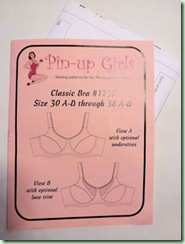 This is the Classic Bra by Beverly Johnson. I like this style a lot and hope to get some good use out of this pattern. In the package I also got two bra kits with all of the supplies. Here’s the chocolate one: 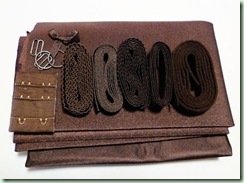 Isn’t it yummy? I lightened up the photo a little so you can see the details. There are two different fabrics, one for the band with lots of stretch and one for the cups with minimal stretch. There’s also 5 different elastics: under band, top band, trim, strap, and channelling. The hardware packet includes a 2x3 hook closure, sliders, rings and a bow to finish it off. I also got a similar kit in black.

Lastly the most important part of the package: 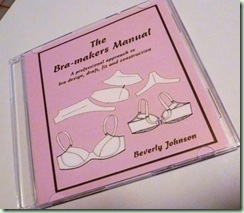 The BOOK! (Yes, I know it looks like a CD but it takes up less space that way.) It’s really detailed, 235 pages, and I’ve been reading madly. Learned a lot too even though I’m only half way through. However, I’m still afraid to cut out the fabric yet! I keep vacillating on the size. I already traced off the 36C which matches my current bras but I think I really need the D. I do know that like most women I’ve never ever ever worn the right bra. So I guess I’m just going to have to jump in and cut a single D cup, sew it together and try it on. That’s the only way I’m going to find out. And even then, there may be surprises. Oh well. There’s always more fabrics being made, right? Or I can always cut it down. I think I’ll start with the black one. I don’t want to mess up the chocolate. I’ve never had a chocolate bra before.

Whilst I’ve been studying and dithering, I did manage to cut out the Sweat Skirt from the 24” of fabric length left over from my Green Tunic. I was so happy that I was able to get the big pockets that I wanted too! I didn’t think I had enough but squeezed the pocket pieces in between the front and back pieces by folding the fabric differently. Bad ASCII version:  <_> instead of < Anyway, you get the drift I hope. Now I need to go sew.

I love ShoeGoo! I can't tell you how many kid's sneakers I've fixed with the stuff back in the day. Actually, I've fixed a few non-shoe things with it too. Handy stuff!! Before you cut into your Bra fabric . . have you thought of using two layers of cotton/lycra?? For a while I sewed my own with matching panties - QuickSew pattern, I believe & used a lot of the cotton/lycra blends when the Stretch & Sew was in Surrey. Now, I'm lazy & order a Sports Bra.