The Holidays are over! Yay! It was really a lovely time spent with family, catching up with their lives, playing with the little ones and eating far too much good food. Now it’s time to get going and get some serious crafty stuff done before I must begin planting seeds and readying the garden for this summer’s produce. This is always a nice quiet few months for me. The weather is crappy, the days are dark and there’s nothing dragging me out and about. As long as I can avoid catching any bugs (touch wood) I can hang in my studio and play to my heart’s content.

Of course I’ve had an uncontrollable urge to cast on for some new knitting projects. Last week I cast on for plain socks out of the leftovers from the Sucky Baby Mitts: 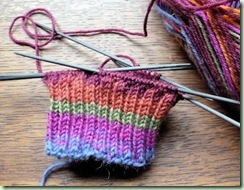 These will be for my poor daughter-in-law who has holes in her first pair that I knit for her years ago. While trying to learn to knit her own socks, she hasn’t been able to get much past the ribbing. I can do them in my sleep! And it’s nice to have a portable project that is also fairly mindless.

Obviously from the photo I didn’t get far on the socks yet because I, um…got distracted. I couldn’t help myself and cast on for the Hitchhiker Shawlette by Martina Behm with some Regia sock yarn in the Saturn colourway. The colours remind me more of Arches National Park in Utah than the planet. (The pattern was apparently named for the book, Hitchhiker’s Guide to the Galaxy.) Anyway, I loved this pattern when I saw one at my weavers’ guild knit from handspun wool. It was such a cool shape: long and narrow with a single sawtoothed edge. In garter stitch it shows off a variegated yarn to perfection. And we all know I need Yet Another scarf/shawl/shawlette/thingy, don’t we? Of course. Here’s what it’s looking like so far: 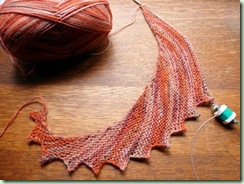 It kind of looks like a dragon’s tail, doesn’t it? However, I’m calling it the Hitchhiking To Saturn Shawlette.

For some silly reason I decided to use my Kollage Square cable needles on this project, which are supposed to be 3.5mm but fit in the 3.25mm hole in my needle sizer. I might have reviewed these needles before but I’m going to reiterate that I like the square shape and love the dark bronze colour of the long tips, which are just a smidgen too blunt for my taste but ok for non-lace projects. What I don’t like at all is the cable. It is way too flimsy right where it attaches to the tips. See: 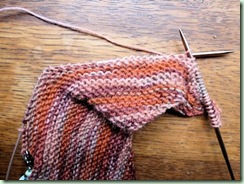 Note the sharp bend on the left there. As the knitting gets heavier, it drags down on the cable and gets harder and harder to slide the stitches smoothly onto the tips. It’s annoying and slows down my knitting speed which already isn’t particularly quick. Apparently it wasn’t just me who was annoyed either because now they have the option of somewhat firmer cables. However that doesn’t help the two sets I already own! This is the needles’ last chance to prove they are functional, at least for some types of projects. If not, I’m donating them elsewhere. They weren’t cheap either. Sigh.

That’s not all the troubles I’ve been having with knitting needles either. One of my new Addi Lace Clik tips has somehow gotten the spring stuck way down inside and now doesn’t hold onto the cable. I’m not sure whether it’s a defect or my fault. Pooh. I’ve contacted the shop where I bought them for options on what to do. I like these needles too! I want to use them. And I’m not particularly hard on things. I still use kitchen appliances that I got as wedding presents over 40 years ago! These needles shouldn’t be so delicate anyhow. They’re tools – not decorations! I’ll let you know what happens when I hear back from the shop. I’m not going to walk there in the dumping rain today to inquire in person.

After I changed over to my regular Addi Lace circular, I finally managed to finish knitting my Madder Rose Shrug that I was working on. It’s currently washed and blocking on the mat. Might take awhile to dry with all the rain we’ve been having. I also found a button that I think might work. I didn’t want to just pin it closed but will leave a small slot in the ribbing seam to accommodate the wooden button. So far I’m quite happy with this sweater. I pinned it on Debbie Double to check and it seems to fit fine – but that was before I blocked it. Only a very little bit of madder dye pinked the wash water too which makes me happy. The handspun wool ended up somewhat streaky but I don’t really mind. It’s handspun, after all, and dyed with madder roots from my garden. I think that’s pretty awesome.

One appliance that didn’t last 40 years is my poor digital camera. I loved this thing that allowed me to take photos so easily. It was a pretty good camera, not top-of-the-line, but with all the functions that I need as an amateur who just needs to document projects and holidays and such. I carried it everywhere as evidenced by all the scratches on its housing. Now nearly 6 years old, my Panasonic Lumix LZ3 has a lens iris that often won’t open all the way and pits and dust inside the lens that can’t be cleaned. Sadly it’s not worth repairing. Technology has moved on. 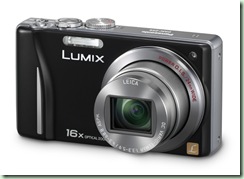 Luckily we received $15 worth of coupons for Best Buy and they also had the new Panasonic Lumix LS8 that I wanted on sale. Best of all, when I went to get it there was a returned camera that had already been opened for $40 less than the sale price! The final total came to less than 1/3 of the recommended retail price. Guess it does occasionally pay to shop on Boxing Week, huh?

So this new Black Beauty has a better lens as well as much higher resolution and super zoom features. Lots of auto-magicals! It’s taking me awhile to learn all its tricks. Some things are similar to my old guy and some not. So far I’ve only taken the photos you see in this post (except of course for the camera pic!) which have been reduced for web. More experimentation will ensue.

Yes, I buy my own presents. Am I spoiled or what?

You are as busy as always from the looks of it. Things are looking good! And I'm quite jealous of your new little camera. I have a Lumix as well and am very happy with it. Enjoy!!

I love that shawlette pattern. I might even give it a spin myself. Enjoy the quiet days of making things, the garden will be clamouring soon enough.