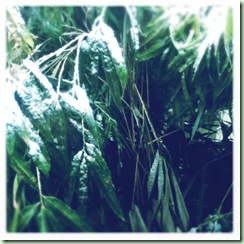 We had snow. Not a lot but just enough to make the morning commute treacherous. T-Man now regrets trying to drive to work when he could have stayed home and worked from here. By the time he figured that out he was halfway there. Life is like that sometimes, isn’t it?

Meanwhile I’ve been musing as I’ve been sewing on my next bra. Hoping that this one will actually fit, though I’ve already found a slight glitch in my pattern adjusting. Not a fatal one though. An odd angle on the cup side under the arm. It lines up fine flat but when it’s sewn together, not so much. It’s a 3-D issue. I’m not good at 3-D thinking. My brain works much better in 2-D. Yeah, I know. I somehow manage to get stuff to fit a 3-D body anyhow. Not sure how that happens. I think it’s a magic trick.

I also had problems with cutting out the next bra from the 2 kits that I got from Bra-Maker’s Supply. I was trying to get as many bras as possible but now that I’ve resized the cups, I can’t get 2 from each kit like I thought. Dang and blast. And I am really good at 2-D puzzle fitting too. Yes I know the intention was only for one bra per kit but the fabric pieces were big enough that I was hoping for more. So I’m making one that is brown and black so I can at least have 3 new bras. The cups and straps are black and the band is brown. It doesn’t look too bad actually. But then I haven’t attached the mauve elastics yet! And the magenta channelling. Yes, this is another Franken-Bra. Yay! Trust me – nobody will notice. However I’m still afraid to commit to the Real Thing, can you tell? I also need more wires.

In a way, I can hardly wait until I’m finished with the bra-making nonsense. I want more clothes. Something relatively easy to sew would be nice. Bras aren’t large garments but they are fiddly and use a lot of thread. Not to mention several different fabrics, elastics and hardware. No wonder the ready-to-wear ones are so pricey. Every seam costs.

Too bad that while they’re at it they can’t come up with a better sizing system for bras. It’s just not working for most women. ’Splain to me why we have to add 4 (or 5) whole inches to our under-bust measurement? Why not just use the measurement as it is? My size 36 bra band measures 32” just as my under-bust does. There is no 36” measurement there, unless you are considering my high-bust which is (surprise!) 36”. But that part of a bra that goes over the high-bust isn’t a straight or defined line - plus there’s a lot of stretch involved - so that measurement is kind of irrelevant. What doesn’t change much even if you gain or lose weight is your ribcage. So the under-bust is a pretty stable place to start sizing from. What’s wrong with using that number as it is? Why do we have to do an arcane mathematical dance instead? Who the heck came up with this?

Then there’s the cups. Now that’s a fluctuating and hard to measure area on a woman’s body! The method of just trying on bras until you find one that fits just won’t work when you are sewing your own. You can’t try it on until it’s pretty much done! Even using “test cups” doesn’t really work. It’s like (pardon the simile) trying to nail jello! Ouch! So we poor sewers (sewists? seamstresses? corsetiers?) are stuck with sewing and testing and sewing and testing until we get something right. And then it changes with a different pattern or different fabrics or different elastics. Or we gain or lose weight or get pregnant. Yikes! Crazy. I’m still trying to do it though. I like a challenge.

So what is it about body image for us women anyway? So many of us hate how we look. We’re unhappy about some area of our anatomy that displeases us. Aren’t we just being overly influenced by the media? The media that’s always trying to tell us something is wrong so they can sell us something to “fix” it? So hard to be strong and ignore it all and just be ourselves, isn’t it? We are what we are. There’s only just so much that we have control over. We can diet and exercise (or get cosmetic surgery – ick!) but anatomy, genetics and age have the rest of the control. Get over it already. How can you hate any part of your beautiful self? After all, how can you ask others to love you if you don’t love you? All of you. Lumps, bumps and grey hairs. I only get annoyed when parts don’t work the way they’re supposed to. Right now most of me is cooperating pretty well. <touch wood>

You know what helped me with my body image? Way back in high school (you know, when dinosaurs roamed the earth and the world was black and white) I had 2 friends who were, dare I say it, gorgeous. They were tall and willowy and went to modelling classes. I wanted to be them. But all they could talk about were their “flaws”. They had a complaint about each and every part of their anatomy! I couldn’t believe that such lovely girls would complain about what I saw as perfection. Here I was, short and pear-shaped and kind of plain-jane. If they were ugly then what did that make me? Uglier? Nope. No way. I was determined not to accept that definition. I saw it as a challenge to just be me. A more intense and true version of me. And not to care (much anyway) about what other people thought. Because obviously their perceptions were all skewed!

OK, you might not be able to follow that logic but it worked for me. And I still remember my feelings clearly to this day, some 45 years later. It still works! I believe I’m beautiful from the inside because that doesn’t change. The outside is still a work in progress! Life is way too short to worry about it. I choose to have fun instead.

OK, enough with the Opr#h already. Go sew a bra.

I am in such awe of your bra-making adventure. I have always hated shopping for bras, trying them on in the horrible harsh light and unforgiving mirrors of The Bay. Once, when I was 26 and perfectly gorgeous, I was so frustrated trying on bra after bra at Woodwards, with none of them fitting, I gave up and went across the street and bought fireworks instead. (Guess it was Hallowe'en.) Anyway, I have had two or three different bra patterns in my stash for the last ten year, I really should try sewing them up.

I've come to the point in my life where I don't give a damn about anything but comfort. Exercise bras are the most comfortable thing invented. Things stay out of the way & are firmly compacted so that all my tops finally fit with no jiggle. No front gape! No top bulge & no 'side boob'. Good luck with the experiment - I do like your colors!!