Remember my panties pattern that I traced from my favourite pair? I now have a wearable muslin! I used some light pumpkin-coloured cotton double-knit from the stash that I was going to use for a t-shirt. I think there’s still enough left from the 1.5M for one. It was a full 66” wide! And I only used just a smidge over 12” worth of the length so I still have a goodly amount left.

Before starting to sew I did a little sleuthing, both in my library and online. I wanted to be sure I knew how to do the crotch gusset and the elastics. Here’s what I discovered. First you sew the gussets to the back: 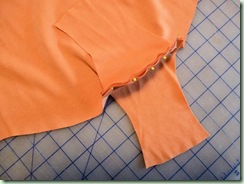 Then you attach the gussets to the front piece by rolling up the front and back in between. Like the burrito method for attaching a yoke on a shirt. 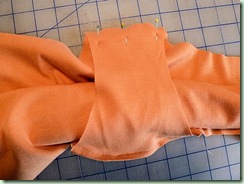 Stitch that seam and turn it right-side-out: 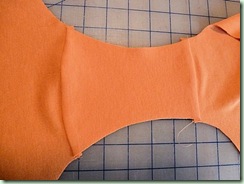 Now the seams are enclosed. Next sew the side seams. I pressed the seam allowances to the back and topstitched them. Or you could do a flat-fell. I learned a cool trick with the elastics but forget where I got it. You have to “exercise” them! Before you cut or sew them, pull them hard a few times so they stretch out as much as they’re going to. I found that made them at least 1” longer. No wonder I always have trouble with loose elastics! Sewing through them makes them stretch out even a little more. I exercised the waistband elastic (a cotton swimsuit elastic) and joined it in a circle, marked the quarters and pinned it in place on the outside of the panties: 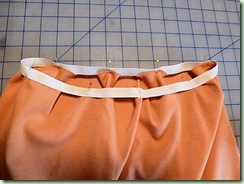 I put pins in between the quarters also. Then I stitched close to the inside edge with a triple-zigzag stitch (aka multi-zigzag or serpentine), stretching as I went: 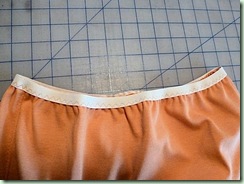 I folded the elastic over to the inside and stitched again close to the other edge: 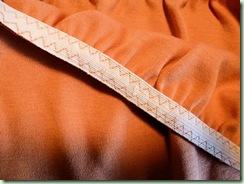 It’s a little wobbly but doesn’t look too bad on the outside: 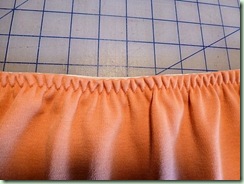 I did the same thing with the elastics for the legs. At least for this part I had proper lingerie elastic with a little picot edge: 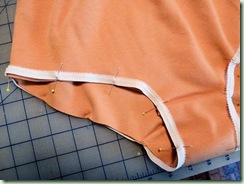 You have to remember to put the picots on the inside edge for the first pass so when you turn it under, the picots show at the fold. And you also need to put more stretch in the crotch and back leg than in the front. Here’s the finished panties: 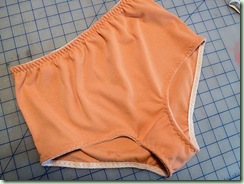 The leg elastic is a little loose but I like it that way so it doesn’t dig in.  They fit perfectly! No, sorry I’m not going to model them. And Debbie Double doesn’t have a bum to put them on. Now that I have a pattern that I like, I can make as many pairs as I want! Old t-shirts would be a good source of cotton knit too. I need to go hunt for some nicer elastics though. If I made them in production mode I could have lots of new pairs. Yay!

Good for you for figuring out that crotch all by yourself!! In the future, if you use lingerie fabric to make panties, you won't have to roll the edges - the stuff doesn't fray or run so you just slap the lingerie elastic on top & sew it down. I used to cruise the discount fabric joints on Victoria Drive for fine knits & made my own for years since I'm so short waisted. They had bolts & bolts for $2 or less & cards & cards of panty elastics in every color known to woman!! I took a great Stretch & Sew Lingerie class years ago that really paid off!!

Thanks for the kind comments, Sharon! I can only wear cotton undies. No synthetics. It also depends on the knit structure whether or not it frays. Plus I need to go back to Dressew for more interesting elastics. Anyhow these panties are super-comfy! More are on the way...

You can put a cotton crotch into the 'mystery' knits if you want something a little snazzier! Used to make em for my girlfriend's little girl - she was ladies M in length & little girl size in width. She wanted pretty panties & her mom wanted cotton so I put a double cotton crotch - we dyed them in koolaid - in the questionable fabric. I think I still have a bin full of that elastic.

Nope! Need cotton top to bottom. Just the crotch isn't enough. Not to worry. I don't mind wearing granny panties! I AM a granny.