‘It is not an emotional struggle between woman and pattern.’

Ummm….maybe it’s not supposed to be a struggle but I’m getting a little annoyed with my bra making experiences. I’m having a Goldilocks Moment – too big, too small, straps stay up, straps fall down – but I can’t quite get to the sweet spot where everything is Just Right. Possibly the thing is hampered by using different fabrics. I was so sure that bra #3 was going to be perfect, but the fabric is lighter and softer and consequently it’s a little loose in the cups so wrinkles form over that darn cup seam. Sigh. The straps mostly stay up pretty well though. Ya wins some and ya loses some. Bra #2 (from the beefier tricot kit fabrics) fits pretty well in the cups but the straps slide down a little more. It’s a delicate dance between baggy wrinkles and too tight where the bridge starts to pull away from my chest and not lie flat. So delicate a dance that I just don’t seem to be able to get it quite right!

The finished eggshell bra (#3 if you’re keeping track) is quite pretty anyway: 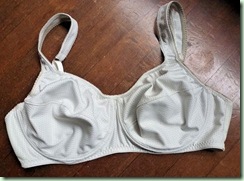 Here’s a close-up of the interesting sport mesh fabric: 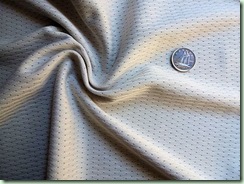 Now I’m feeling a huge need to go sew something else for awhile! Though I’m afraid to lose the skills I’ve gained in sewing elastics so I should really do the two kit bras before I lose momentum entirely. I’m just kind of tired of fussing with this for weeks on end and want something simple and clean to “cleanse my palate”. There are lots of options in the queue!

Another FO to show is this one: 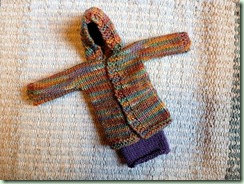 Well two if you count the skirt which I finished ages ago: 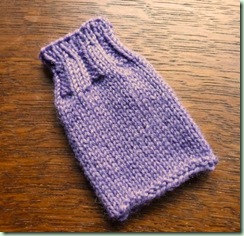 They are of course for Grandbeastie #1, Super-Princess and her Barbies. I hope the plethora of Barbies that she owns don’t fight over who gets to wear the outfit! They’ll just have to share. The pattern is #65 from a very comprehensive Barbie knitting site from Sweden http://www.stickatillbarbie.se/ (patterns in 6 languages!) and the yarns are sock leftovers knit with 3mm needles. I changed the skirt pattern to knit it in the round but played the jacket straight – although it came out a little wonky because I don’t think I was as careful at measuring as I should have been. I was in a hurry to finish, naughty granny. I used clear snaps on the front which were a bear to sew in because the female side only worked one way but that way was NOT obvious. I ripped all my careful stitching out several times before I got them all in correctly. Then I stitched beads on the front to look like small buttons. SP forgot to bring a Barbie to model so we settled for a flat photo. I think she liked her new doll outfit though. Hard to tell with that girl sometimes. Maybe next time I’ll make a Barbie dress. There’s lots to choose from.

Meanwhile spring has sprung and the daffodils are coming out. The garden is starting to call seriously and seeds need to be planted beginning very soon. Like now for some of my indoor starts. I always balk at washing all the pony flats though it should be done every year to avoid diseases that could kill my baby plants. It’s just a chore that’s too much like washing a gazillion really dirty dishes! And I should use a dab of bleach as well but I’m so sensitive to that stuff I avoid it as much as possible. I’d rather hope that good old dish detergent does a good enough job. However, instead of doing yard work, we unilaterally decided to go for a walk yesterday in the sunshine. Today is not quite so lovely so hopefully it will be more conducive to getting down and dirty.

At least for a few hours. I also still have to organise my stuff for the Spectrum Study Group meeting tomorrow. I was hoping to give my silk crepe square scarf an under-dye before stamping and painting it with thickened natural dyes but Someone Else has it and hasn’t forked it over. I can’t be too grumpy though because it got itself alum mordanted for me. Perhaps I’ll just bring my dyestuff along and do the immersion dyeing first. If I don’t get around to the rest of the layers, I can do that later at home. Or shibori it instead. Whatever. I can’t even decide what colour to dye it yet. Or what to bring for the potluck lunch. Decisions. Decisions.

BTW, if you’re one of the sewing enthusiasts (I’m not getting into the sewer/sewist/seamstress/tailor/whatever debate!), go check out StephC’s blog if you haven’t discovered it yet. Link is up top there with her quote. She’s an American-expat in Australia and has a lot of good sewing and pattern alteration information. Free t-shirt pattern too. I’m slowly making my way through her older posts. It’s that good.

Also currently reading: Just Keep Knitting: a journey of healing through forgiveness, faith and fibre by Lonna Cunningham. Thanks to this post from dear Skipper, I had to check out this book from a Canadian author. You can order the print copy which has just become available or, if you’re as impatient as I am, get the ebook (multiple formats). Smashwords has a promotion on through March 10, 2012 that will give you 50% off – so of course I signed up and downloaded the PDF right away. Fascinating story too. More anon.

My you are tenacious. Even store bought bras can fit better one day than the next!

Hey I'm a Scorpio! We are the most stubborn of all. Mwaa-ha-haaa...

I'm thrilled to see the comments by Stephanie! You're welcome and thanks for the vote of confidence.

I'll be watching your bra-making adventures. I am embarking on the adventure myself! I just ordered a Merckwaerdigh pattern (CUPL16) on etsy because it was just about the only thing I found in a bigger cup size. I'm a little nervous about this project, but I just can't take the ready-to-wear struggle any longer.