How I Spent Earth Day

With my hands in the earth, of course! We spent the whole weekend working in the Back 40, as I affectionately refer to the veggie garden: 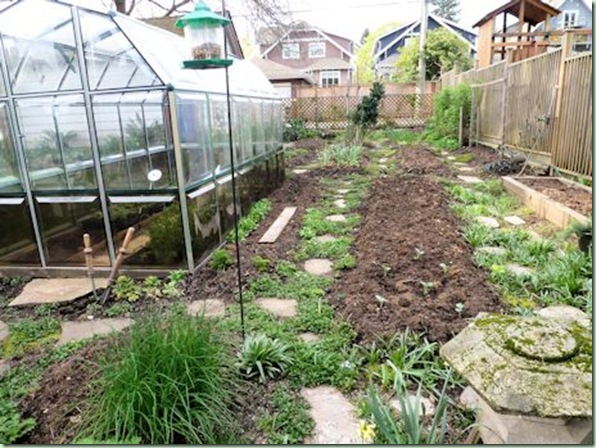 I haven’t measured but it’s at least 40 feet anyway! It’s coming along quite nicely I think with the added compost and mushroom manure. The pathways need a little more weeding. I’ve got the kale, cabbage, broccoli, lettuce, leeks and a few other things in. The peas are finally coming up and I’m picking rhubarb, asparagus, lamb’s lettuce, kale buds, chives and green onions. It’s still a little too early to plant the beans, cucumbers, squashes and tomatoes so they are currently spending their days in the greenhouse and their nights indoors. I call it The Daily Schlep as I lug each flat in and out, one at a time.

Speaking of the greenhouse, didn’t T-Man do a lovely job of cleaning the algae, pollen, spider crap and mud off it inside and out? He even repaired a seam in the roof with epoxy glue that had popped open in the winter. See those “sticks” in front of the greenhouse door? He made them a couple of years ago to keep the door from swinging when we want it to stay open. One stays behind to support the door (which doesn’t open any further) and we push the other into the dirt in front sandwiching the door between. Holds pretty well too even in a strong wind. I love how the turned handles are weathering with a nice patina.

So this is T’s last week of work before he retires. Yay! They’re throwing him a nice dinner on Thursday and he’s been somewhat surprised and gratified at how many coworkers came to his desk over the last few weeks to tell them how great he is and how much they will miss him. As a Technical Response Specialist in the printing field, he has the rare combination of gifts: tech skills and people skills. He not only fixed the customers’ problems but always generously spent time mentoring coworkers and answering their questions. He liked his current job (most of the time) but he realised that he would prefer to spend his time while he is still relatively young and healthy to enjoy himself and do things that he wants to do rather than to have to constantly struggle to learn new systems and deal with seemingly arbitrary changes. The equipment that he was hired 8 years ago to support has been given an official “end of service life” so he says he’s going to join it. I hope they miss him a lot! So far there is nobody to take his place. Now I finally get him all to myself after 40+ years of sharing him with his job. Heh!

Meanwhile, back in the studio my latest dress (or tunic or whatever it is) is not going well. I made a really nice skirt part with slouchy pockets. I had some trouble with the narrow band on the skirt bottom that was supposed to bubble the hem in a bit – but it didn’t. So I threaded a string through the band and stitched it securely at the seams. Hopefully it will hold things in the way I want. However, unfortunately the bodice part is not cooperating at all. If you remember, I was trying to use a cotton rib for the tunic’s top but it doesn’t seem to have enough body to support the weight of the heavy cotton/lycra interlock of the skirt part. Plus, when I tried to bind the sleeves with self-fabric they stretched completely out of shape. Just horrible. I was so disappointed! I was happy that I tried the sleeves first before tackling the neckline but it doesn’t really matter, it’s just not going to work. So I’m scrapping the ribbing altogether (it was a $2.99 remnant) and will re-cut the bodice and sleeves in the same fabric as the skirt part. So what if I can’t get the t-shirt I wanted out of the remainder? There’s more fabric in Dressew just waiting for me! And anyhow I’d rather end up with something wearable than a wadder. But I’m renaming it the Tulip Tunic because the skirt reminds me of an upside-down red tulip. Don’t laugh. I’m trying to come up with better project names here.

More on this one anon.

Congrats to your hubby on his retirement from what sounds like a very productive and successful career. Hope you enjoy all the time you now have together.

Thanks for the kind words, Heather! I'll be sure to pass them on.