The Week That Was

Wow! We’re way into April and it’s been a whole week since I’ve posted. What’s gotten into me? I guess I’ve been both busy and tired. On Wednesday I went to the dentist to get the prep work for my new bridge done. I managed to only choke and splutter once which was a huge feat, I can tell you. I’ll spare you the grizzly details but I now have a quite functional temporary bridge glued in. It has to last until the 25th when I get the real thing. Oh. Joy.

Right after my appointment and while I was still frozen up to the eyeball (literally) I decided to hop Skytrain and go downtown to Dressew. I still needed to get some lightweight stretchy black fabric for the bodice lining for the fleece jacket (McCalls 5714). I hope I’ve managed to adjust the pattern to fit me and although it’s still rather close-fitting, I think I like it that way. But I decided to finish it properly except to face it with something lighter instead of self-lining. I also want inseam pockets and the polar fleece is much too bulky for that.

So I found some textured poly knit that will work and of course got enough to make a t-shirt as well. I also got some nylon/lycra in a dark chocolate brown for a tankini bathing suit and a whole lot more lingerie elastic for more bloomers. However I couldn’t help myself when I saw they had some lovely linen and linen blends in stock! I resisted enough to only buy two pieces: dark brown stretch linen for pants and a cotton/linen twill for a tunic. The rest of them were calling me but I closed my ears. La-la-la…can’t hear you…

Also this week I finally managed to dye my silk crepe scarf in an “eco-dye” technique. This was my first real experience with this and I was curious how well it would turn out. The scarf had already been mordanted in alum so I soaked it in water, squeezed it out and spread half of it on a plastic drop cloth. I already knew what items I was going to use on the silk: red sandalwood sawdust “mud” (leftovers from an attempt to extract the colour for a dye session over a year ago and surprisingly not mouldy!), onion skins and a sprinkle of dried coreopsis flowers. 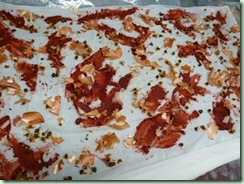 I folded over the other half of the scarf and patted it down: 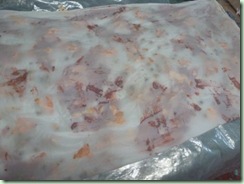 Then I folded it one more time to make it narrow enough to fit in my steamer. I rolled it up and secured with rubber bands: 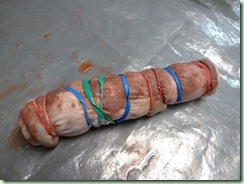 Then I steamed it for an hour or so and then left it to cool overnight: 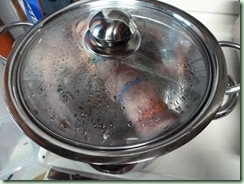 I like this new stainless steel pot with the clear glass lid. The colander fits right in and the lid fits on top to make a nice little steamer setup. It’s also a nice size for small batches of dye rather than my big 15 and 20-litre ones. The next day I took off the rubber bands and rinsed out the plant matter in a dishpan: 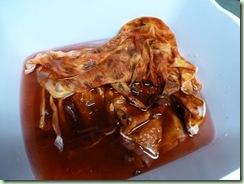 I didn’t want all that stuff to clog the drain so I dumped it in the compost instead. A good rinse, a little Orvus and another rinse and the water was running clear. The scarf dried really quickly and I should have just ironed it right away. I had to spritz with water and use lots of steam to get the crinkles out. There’s still a few permanent creases but that’s ok. I’m quite pleased with the final effect: 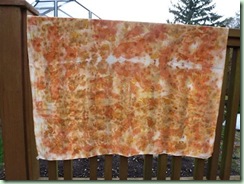 Obviously I should have been a little more careful at the fold line and edges if I wanted a completely covered cloth. The inkblot effect is kind of interesting however. And a detail: 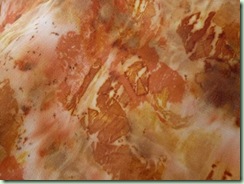 I just love the nifty prints that the onion skins made. The dark dots are from the coreopsis and the red blotches are the sandalwood. I have a whole pail of that stuff still and really should use it. It didn’t work very well as an extracted dyestuff but really needs to contact the fibre to colour it properly. Cloth seems to work much better than yarns did and you’d never get all the powdered sawdust out of fleece! The success with the scarf is giving me ideas for cloth however.

Thursday was Spectrum Study Group and since I wasn’t interested in making book covers I just knitted and socialised. It was also the one-month anniversary of the Zombie Plague. I’m still coughing. Grrrr….

Friday was a day off for T-Man so we went walking. The sun was out when we left home but while we were having fish and chips on Granville Island a big cloud came over and dumped rain and hail. We tried to wait it out inside the Kid’s Market but it just went on and on. Of course we didn’t have umbrellas! (Even though I had dragged them around with me in the sunshine for the 2 days before that.) So we stayed under the Granville Bridge as long as we could, slunk through the pedestrian tunnel and then sidled up to Broadway under as many awnings as were available. By the time we got to Chapters we were a little damp around the ears! While we waited for awhile in the book store, the rain stopped and we dashed for home but it started again before we got to Cambie Street. There were drifts of hail in patches too so it must have been heavy but spotty. By the time we got home it had pretty much let up. Timing is everything, huh?

Today is official Muck Out The House Day. It’s been getting a lick and a promise for weeks. This probably won’t be much better but at least it’s a stab at chasing down the dust buffaloes. The grandbeasties will just mess it up tomorrow anyhow!

Before I forget, we heard the birds at our feeder fluttering away and squeaking alarm calls. Then this handsome Coopers hawk landed nearby: 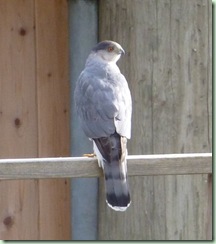 It’s a somewhat bigger than our small northwestern crows and has really pretty ruby eyes. It also missed its lunch – at least at our house. Hope it found the pickings better elsewhere. A bird’s gotta eat, ya know.

Happy Easter or whatever you happen to celebrate – or not!

What a cool dyeing experiment! It's like a fall day Rorschach test! I love it.

We've got two Merlin falcons that come nest in a tree in our front yard each year. They certainly seem to keep the starling population in check.

I am tempted to go down to dressew when you talk about that linen. Love that dye job. It is a fab piece of fabric.
Here is a link for you to enjoy.
http://sewintriguing.blogspot.ca/2012/04/turquoiseplum-bra-dyeing.html

And that cough?? I still wake up some mornings & hack & wheeze & blow till noon!!

Orange and rust are always the popular colours in MY world. I don't need nobody to make it official!

Thanks for all the kind comments. I checked out your link, Rosemary, and she's sewed bathing suits too! Too bad she doesn't post more often, huh?

I really appreciate the step by step commentary! My daughter in law does a lot of dyeing and screen printing, and I'm in awe. Eventually I'm going to try it!

Your hawk is gorgeous. We had a family in our back yard, but a different variety, not as pretty as this one. I still love them, though.

Have a great week!

Thanks for your kind words about my beaded shawl!