Not quite a week between posts this time. I’m trying to improve! Of course it helps that it’s been raining on and off for days. What happened to that lovely late spring weather we were having? You know it’s bad when I’ve been reduced to wearing a sweater. Indoors.

So what has that old damselfly been up to this time? Well, I finished hemming my black silk crepe scarf so then it was time to experiment with discharge on it. Just to give it some designs other than dead black and prevent me from looking like I’m going to a funeral or something. First I fan-folded and rolled it up like sushi maki and tied a string around it to hold it together: 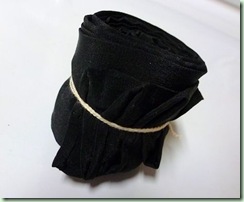 Then I tried to find out what the percentages were for the discharge chemicals. Silk is ruined by bleach (as am I!) so it had to be thiox (thiourea dioxide) and soda ash. But what proportions? Every authority that I consulted had different amounts and they were specified for vast amounts of discharge (2 gallons or more). I only needed a half a litre for my scarf. I settled on 1/4 tsp thiox and 1/2 tsp soda ash in 500 ml of nearly boiling water: 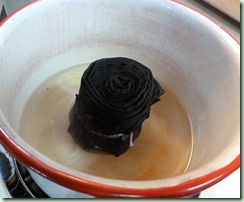 I ended up taking out half of the solution so the roll could sit immersed halfway up its sides. So fascinating to watch the colour leak out of the roll and disappear into the clear solution! It was really slow though and not nearly discharged enough so I swapped out the spent solution and added the other half to the pot. It’s only good for about 20 minutes before it loses its efficacy anyhow. It was kind of hard to tell what was going on in the roll and so I was disappointed with the results: 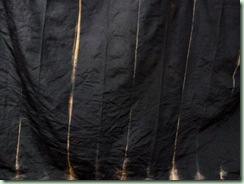 Just straight lines and a bit of interest at the edge that was on the outside of the roll. Next morning I tried again with a different fold: 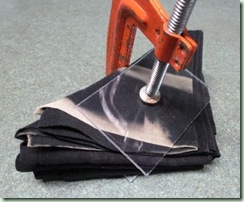 This time I did a wider flag-fold and clamped it between two pieces of Lexan (left over from our basement window safety protection). The Lexan was quite thin and ended up warping in the hot water but it did the trick. This time I used equal parts thiox and soda ash, 1/2 tsp each. This worked much better and quicker and although the results aren’t up to the gorgeous work I’ve seen from dyers who are experts in itajime (fold/clamp resist). But it’s much nicer than a plain black scarf: 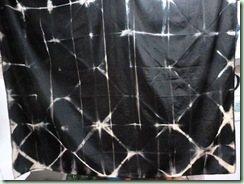 The success of the design was kind of hindered by the first layer of discharge and I probably didn’t leave it in long enough to penetrate all the way through. I do like the rectangle formed by the Lexan on one corner and can wear it folded to show it off: 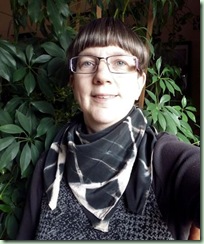 Whaddya think? It obviously goes with a lot of my black and grey wardrobe. I might just see if I can get another pair of pettipants and a long scarf out of the rest of this silk crepe. Yum. Silk undies! Lurve. Not looking forward to hemming another scarf – though I am getting better at it. And it would be fun to try some more discharge.

What else have I been up to? Oh yeah. I cleaned half of my studio: 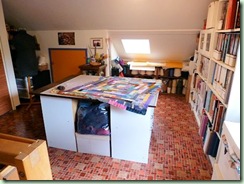 I folded up poor Carolyn, my 12-shaft Woolhouse table loom and her stand and put them in the big closet in the other room. I wanted to add it to the attic space where I keep the guild’s rental spinning stuff and some of my spare equipment but it wouldn’t fit. No I’m not selling her, just giving her a little time-out. That gave me more floor space so I could turn the big cutting table around. Of course now that I could actually see my shelves of weaving yarns back there under the skylight, I had to go through them and dust. I was especially encouraged to be thorough after I saw a m*th! No damage – that I could find at least. Whew. I also cleared off the top of the yarn shelves so I could use its flat surface for my pattern blocks and current patterns-in-progress. Those slanted ceilings are a pain but it’s better than not having the space at all. I’ve learned how to duck.

One thing about going through stash, I get ideas for ways to use it. Too bad everything takes so much time. If I could only whip things out as fast as my imagination! I did get inspired to start planning my bedroom curtain replacement and located the yarns for it, so watch for some actual weaving coming up. I haven’t done any weaving at all for 5 years! Yikes. Think I remember how?

To prove I still have a big loom to weave on, here’s part of the other side of the studio: 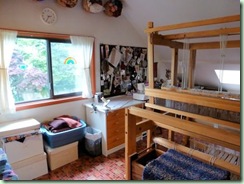 Notice the pieces for the pleat-collared blouse muslin are still sitting there on the sewing table behind the ball-winder untouched and unstitched. Soon. And there’s more fabric in those boxes lying in wait. So many projects! Too bad the days fly by so fast…

Cool scarf! I like the design the folds created.
Fun to see your studio. I'm glad I've been able to resist learning to weave. It takes up a lot of room!

Great scarf, very creative! I love this line ... "If I could only whip things out as fast as my imagination!" Isn't THAT the truth?? I'll need to live to be 417 to knit all the patterns I'd like to ... and that's not counting the designs I'm creating!

Yes, I liked how the scarf turned out in the end - lovely!! But what's with this black & grey wardrobe??? As Sarah Richardson says, isn't black & white a little tastier(my correction) with a little shot of color??? How bout a shot of Apple Green or a little Pumpkin? Or Aqua? I'd have some Fuchsia, Watermelon or Turquoise in there somewhere!