Another whole week got away from me and now it’s the last day of June! Sheesh. So what has this damselfly been up to? The weather has been variable but slightly warmer than it has been. We managed to get out in the garden for a couple of good sessions. How about a whirlwind tour? Here’s a shot of the “back 40”: 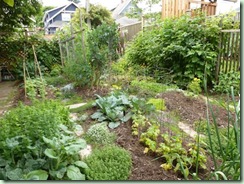 Things are growing. Finally. Those poor cucumbers in the right foreground are just recuperating and starting to flower. I lost 2 of them when their roots got eaten? rotted? Something unhappy. If nothing else stops them by the end of the season they will be up to the top of their cages and embellished with string suspenders. The squashes are starting to do something too. See the baby pale green zucchinis? 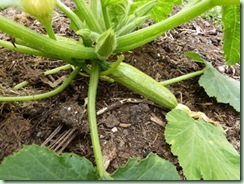 This is a new variety for me this year. And the garlics have scapes: 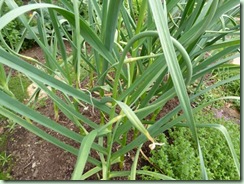 I love how they curl around. Yummy too! Like an extra present from the garlic. The tomatoes in the greenhouse are starting to become taller than me now. Not too many flowers yet however. And don’t forget about Buddy’s tomato: 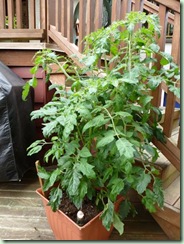 You can tell how much the plant has grown by how small he looks next to it! Lots of flowers but no fruit yet. I picked the first broccoli and snap peas: 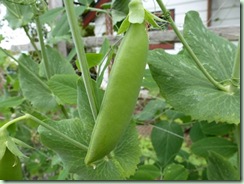 They are quite late and I doubt I’m going to get too many this year. I had to replant when many didn’t come up. Or got eaten by the birds since I forgot to net them over. In the dye garden the madder is doing the best it ever has: 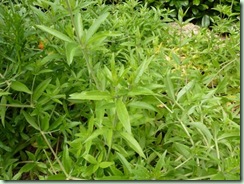 It’s really too bad it’s not a more attractive plant, huh? Stickery. Sprawling. But the only real red dye in my garden. I actually could use about three times as much as I currently have. The second-year weld is taller than I am and starting to bloom: 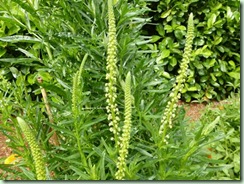 I had to stake them because they were falling over from the rain. I didn’t plant any new baby weld this year because I already have enough dyestuff and the 3 or 4 that volunteered this year equals Way Too Much Weld! It’s a lovely colourfast bright yellow dye and so easy to grow. It reseeds itself too but is easy to weed out extras. Should be in every dyer’s garden.

What else? Oh yeah, the poor woad which had to be replanted twice is finally catching up: 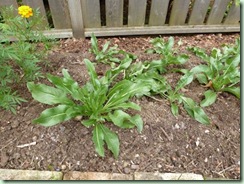 They’re not too exciting yet and it doesn’t help when Somebody’s Stupid Dog is allowed to tromp all over my garden. Grrr… At least I have the Japanese indigo as well: 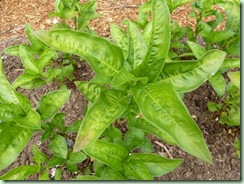 Like the squashes, it’s not liking the cold and rain much but since the weather has been a little warmer it’s finally starting to grow again. The usual marigolds, coreopsis and calendulas are doing well. The whole garden looks quite nice if I do say so myself. I did have some help. Heh.

In crafty news, I’m still not quite done the second 10-Stitch Blanket. One more side to go. Sewing-wise I drafted a top pattern and then found out the only suitable fabric wasn’t sufficient. So I went to Plan B and struggled with another top pattern draft. Remember the Anthropology top from 2010? No? I’ll have to locate the original images. Anyway, I finally figured it out (I hope) and am currently cutting out the pieces from 4 different fabrics. Plus I’ve discovered that there’s enough fabric left from these scraps to make several more garments. One thing leads to another, doesn’t it? Too bad I’m so slow at sewing. Actually, it’s more like slow at tweaking the pattern. The sewing is usually pretty straightforward after that.

Off to get something useful done.