Yep, we’ve started on the bathroom. The tiny One-And-Only bathroom in our old house. I have no “before” pictures because frankly, it was disgusting! Mould, spider webs, dust, dirt, peeling paint, rusted-out sink and, last but not least, bathtub piping that has needed replacing for about 30 years. That’s what you get for living in the same house for decades – an almost imperceptible build-up of grunge that you just learn to not see. You know it’s there though. You just don’t want to deal with it right now.

Well, RIGHT NOW has finally arrived! So far we’ve stripped everything out of there except the toilet paper. The walls and ceiling have been washed down with TSP and rinsed. There is a big hole in the wall between the toilet and the end of the bathtub exposing the seriously corroded 80-year-old pipes, the last ones in the house that haven’t already been replaced by T-Man. They’ve been dripping very slowly for years into a bucket underneath in the basement, located conveniently down there near my dye stove.

Yesterday we went hunting for a replacement sink. Again. We already replaced it once fairly soon after moving in. The reason we hesitated this time is because it’s hard to find the right colour. The style is easy: 19” circular drop-in, tap holes on 4” centres, 8” depth. The colour is a pale gold which of course is no longer available. White just doesn’t cut it. The tub and toilet are pale gold and the vintage glass floor tiles are dominated by the same colour. No, it is definitely not bone, almond or biscuit either but any of those would be better than white. We did find a lovely sink in the right size in a colour called “sunshine” which would be nearly perfect – except that it costs almost $200 and is a special-order. A little out of the price-range of old retired folks on a fixed income. Next we go look at a local contractor supplier which reportedly carries older sink styles and colours. Crossed fingers!

T-Man also picked up the plumbing supplies he needs to do the pipe replacement. And a honking big crescent wrench because the one he has isn’t quite big enough. Another set of crossed fingers since these jobs never seem to go without a hitch. He is currently sitting in bed, not dressed, reading a book and avoiding the issue.

Meanwhile amongst the bathroom debris, I’ve made this: 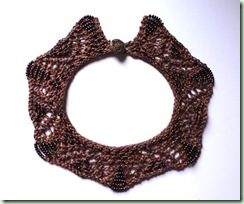 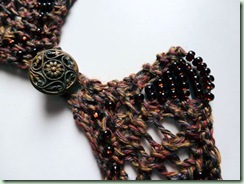 Comments:  I probably should have used a slightly larger needle size since I didn’t get anywhere near gauge. The necklace came out several inches shorter than stated but it still fits my skinny neck quite nicely. The muted colour goes with a lot of garments in my closet but I’m sure it doesn’t appeal to many others! Don’t really know why I was inspired to make this because I really haven’t worn much jewelry lately. I like it anyway.

In other crafty news, I’m on the last round on my Ten-Stitch Blanket and I have about 1-1/2 rounds on T’s to go. It’s slow but I do a little every day so it will get done eventually. I’ve also been slowly working on my Pleat-Neck Blouse. The collar is nearly done. I just have to add the facing. Yesterday I tweaked the side seams and added fish-eye darts to the back to give it a little shape. First it looked like this: 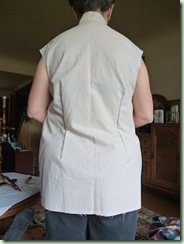 Such a great view of my amazing ski-slope shoulders! The darts and seams are unpressed here so look pretty awful! I took the darts a smidgen higher up my back. Just an inch and a good press made a difference: 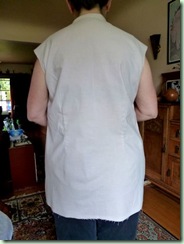 Better, huh? I also shaved a hair off the underarm area where I had added more than an inch to the original pattern. There’s still some major wrinkling at the shoulders and under the arms but some of that is because the armholes are yet unfinished. The rest is courtesy of my elderly shoulder shape and I just couldn’t figure out how to deal with it in this pattern with its forward seam/yoke. I’m ok with this much anyhow. The front is looking pretty good too so I should be finished quite soon. Then it’s into the dyepot with it!

Oh, the necklace is way nice. The beading adds a good contrasting texture.
I hope your bathroom reno goes well. It's good that you're anticipating a setback, so you won't be caught off guard when it occurs. My advice? Just go with the flow (sorry - I couldn't resist the pun).

Fingers crossed and sending good luck thoughts that this project goes as smoothly as possible. After doing our bathroom my husband said I was never allowed to say the word "renovate" again.
Your beading, as usual, is stunning!

The necklace is charming. Good luck with the reno. I remember when an ex-partner and I were renovating our bathroom, and he sent me for the umpteenth time into town for a needed part. At the plumbing supply place, I was given a choice between a rubber thingamajig and a plastic one. I said, "I don't know, whatever will cause the least amount of cursing." From behind the shelves I heard a male voice say, "It's cursing that gets the job done!"

I couldn't stop laughing at Heather's story about the cursing!! At least you're not in a ditch, up to your knees in muddy water, in the middle of winter with a sick husband who's passing out! When our pipes went, we had to dig up the yard, cause it was the main one coming into the house that went. The husband refused to get someone in because we could "do it ourselves"! So there we were, no water, cold, wet, sick husband & a lot of cursing too, I phoned for help & waved a $50 bill at whichever friend would come & finish hooking us up. I had to fill in the ditch myself.
and the sick husband complained for years! I'm very fond of the new plastic pipe they make these days - no soldering - snap & fit connections & one long flexible tube. Yeppers. My kind of plumbing! Good luck.

So, how did the renovation go? Are your pipes well-installed? I’m afraid you must install a whole new set of pipelines. From what you said, you’ve never replaced those pipes for 30 years? No question that it wouldn't be in good condition now. By the way, your ten-stitch blanket looks so nice along with the endira necklace, it does goes well with each other. Good work!