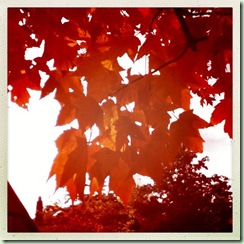 Yeah, I know. Bad pun. We are in Full Colour Mode here in Soggy-By-The-Sea and needless to say I’m enjoying it as immensely as always. Oranges, reds, rusts, golds, weird intermediates between green and magenta, odd browny-purples etc. are my most favourite colour palette of all. Puts a smile on my face and a song in my heart every year.

Yesterday we walked over to Trout Lake for the last farmers’ market of the season. Everyone was in a happy mood. How could they help it? The sun was out, the leaves were colourful and the produce was scrumptious. We got some organic carrots and radishes and ate them dipped in herbed fromage frais for lunch by the lake. We also got a red kuri squash, some kale (mine is sadly covered in powder mildew), mixed salad greens, Mitsu apples and shiitake mushrooms. And then we walked home. It’s a bit of a walk (3.5km) but not out of our comfort zone. Of course we could have taken the bikes but that’s just too easy.

Meanwhile in crafty news, I’m up to the last sleeve on Stargazer’s new Johnny Sweater. Once I finish that then all I have to do is knit the neckline ribbing and sew up the side seams. I’ve eliminated the button placket on the neck since the opening is big enough to get over his head. I was afraid he’d think the buttons were too “babyish” for a nearly-six-year-old.

I’m also knitting away on my Black Spruce Shawl and getting a little concerned about having enough of the yarn to finish. It’s definitely going to be close. I’m not quite halfway through the chart and nearing the end of the first of only two 50g balls of the charcoal. Luckily I only have one more row with nupps which use up an amazing amount of yarn – especially when you work them loose enough. After that there’s lots of lacy holes which use less. Hopefully. I suppose I could cannibalize my swatch if necessary.

I’m actually beginning to enjoy nupps. Yes, I know. Crazy damselfly. However, it really helps to practice making them very loose and holding each loop to the needle with a finger as you make the next one so they don’t close up again. They have to have enough room so on the return row you can get your needle tip all the way through all the loops and have it stick out the end far enough to get the yarn around it to pull through. I use my pointy Addi Lace circulars and wiggle the tip through the tunnel, feeling for the metal-on-metal that tells me that I haven’t missed any loops. It seems to work and I haven’t had nearly the trouble that I did on the first project with nupps that I knit, the ever-popular Swallowtail. I know a lot of knitters are intimidated by nupps and tend to substitute beads but, much as I like beads, I feel they don’t have the same poofy texture as the little woolly knots and much is lost in the pattern’s design. IMO, beads are better in patterns where they are sparkly accents rather than depending on them to carry a larger visual impact as nupps do. Simply put, beads aren’t dominating enough as a design element. Am I making any sense? nevermind…

I’ve also been slowly and carefully sewing up my fulled black wool jersey cardigan-jacket. I’m using the same pattern that I used for my grey Shawl Collar Vest, McCalls 6084: 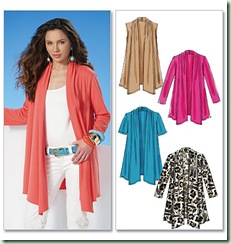 This time I’m putting sleeves on it. And cutting lacy leaf shapes for an embellishment on cuffs and front edges. I realised that this stuff cost me over $80 so I don’t want to make any fatal mistakes! Out of the original 4.5 yards it shrank down to just over 3.5 and down to 42” in the width as well. It’s lovely stuff and ridiculously easy to cut and sew even though it’s super-thick. No fraying at all. After cutting out my jacket there’s only a small amount of fabric left, not even enough for a small vest. It’ll have to go in a collage garment of some sort. I’m certainly not going to chuck it out! More on this garment as soon as I’ve finished it.

The weather is changeable today. A little sun, a little cloud, a little rain. It’s colder than it has been but still nowhere near freezing. We did have some hail yesterday morning but it didn’t seem to hurt anything. I’m still hoping for Japanese indigo seeds. I may bring in some of the oldest flower stems soon.

Here’s another of my iTouch’s Hipstamatic photos from yesterday. It’s so fun to play with! Even though you don’t have much control over the results, it always looks artistic. 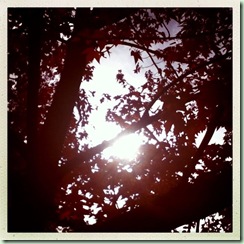