Was That A Turkey That Just Flew By?

Hope all my Canadian readers had a Happy Thanksgiving! We did. Turkey, ham, stuffing, good family. I’m thankful for so many things.

I’ve had lots of finished items to show but somehow it’s not as easy to get around to posting as I could wish. I don’t know why. Lazing around knitting and reading is easy. Writing is harder. Perhaps I’m distracted a little by T-Man – not that he prevents me from doing anything! Just that there’s more going on around me than there used to be. It’s the New Normal. Things are still finding a post-retirement balance. And no, I’m not complaining one little bit. Except that the blogging is a little sparse these days. Sorry about that.

Oh well. Here’s the scoop on the socks I finished last month on the first day of our holidays. 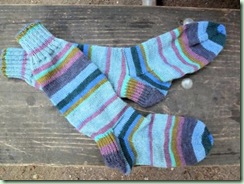 Comments:  Just another plain pair of socks with slightly longer legs. I like them to slouch a little above my boot tops. Some of my oldest pairs are starting to wear out. Regia is one of the yarns that wears really well.

Is it just me or are there less choices in this type of sock yarn out there now? The last couple of yarn shops I went into had lots of the indie handpainted skeins but very little in the way of Trekking or Regia or Patons Kroy. The handpaints are lovely but I’m not going to use them for everyday socks. Or grandchildren’s sweaters. Maybe it’s just a current trend in popularity. Personally I’d love to buy huge cones of the base yarns and dye my own. But that’s just me. I did manage to find a suitable yarn (Patons Kroy FX, cadet colours) for grandson Stargazer’s new Johnny Boy sweater. This will be his third version! He actually wears them which inspires me to keep going.

In an effort to spread this out over several posts, I’m going to hold off on the next two FOs. Yeah, I’m a meanie. In other news I’ve washed all my new fabrics except the muslin which doesn’t need it. They came out pretty well even though I tortured them in a warm wash and hot dryer. The silk needs ironing and the rayon microfibre needs wool lint brushed off courtesy of the wool jersey. The latter actually shrank and plumped up quite a bit even though it was labelled as already washed and dried. I like to avoid later surprises by giving my fabrics a pretty hard go at the beginning and then treating the finished garment either the same way or more gently in future, depending on how they perform. For instance, I never dry linen or hemp in the dryer ever again if I can help it. They last much much longer if you hang them to dry and then iron. It takes longer for them to get softened up but it happens eventually.

Oh, and I also started designing a crescent scarf/shawlette/thingy using one of the edgings in The Haapsalu Scarf book. Swatch is knitted and blocked but I’m a little ambivalent about the yarn. I’m trying to use up stuff from the stash and this DGB Confetti yarn in charcoal kind of looks chunky in garter stitch. The jury is still out. More anon.

Great socks! And do you never put linen or hemp in the dryer? Or just never after the first time? I like the way the fabric softens up in the dryer but I know how damaging dryers are in the long run.
Looking forward to seeing what else you have made!

Love the Kaffe socks!You did a great job of getting the stripes to line up.
I agree with blog writing, as I haven't done any in over a month. I've got lots to say, but have been very busy with other things. So I can relate!
I also agree with your fabric shrinking theory and method. I put most every fabric in the dryer at the first wash, but never again. It can really wear things out.
Looking forward to seeing what else you've made!

Thanks for your kind comments, m'dears! Yes, Heather, I machine wash and dry linen and the like once and then try to remember not to put it in the dryer ever again. T-Man has linen shirts that he's had for years that I always hang to dry and then iron. He loves linen and ramie (which you don't find often any more).

I have knit myself the same socks this summer, your photo came out better and I havenn't done my post yet.