Shopping Is A Bad Word

No, this isn’t the beginning of one of my Seasonal Rants. I promised to behave myself this year on that topic. I think the problem is deeper than just one season. It’s “shopping” in general that I have a problem with. (Unless of course we’re talking food/books/fabric/yarn/fibre/tools/diy stuff. For some reason Things To Make Things With is another category in my head entirely!) I absolutely do not understand shopping as entertainment. It’s more like a bad dream.

What’s got the bee in my bonnet this time? Shopping for kids. A necessity since I only give holiday gifts to the grandbeasties, plus there’s a birthday or two in the month of December. I (mostly) refuse to consider buying toys. Why contribute to the Plastic Sargasso Sea, the insidious one that is taking over their rooms? Which only leaves books and clothes. Have you looked at kids’ clothes recently? Yikes! For girls it’s the floofy princess party dresses, mini-slutwear, pink-pink-pink, sparkly-glittery everything. For boys it’s… not much. Dull blues and grays. Lots of logos of football/hockey/racing cars/dinosaurs. Gah.

Am I just old? I don’t remember everything being quite so definitely differentiated between boys and girls even when my kids were little. These days you can’t even hand down a toy from a girl to her little brother. He won’t play with a pink anything! And I don’t blame him either. The girly things are overly concerned with beauty and personal adornment and the boy things are a whole lot more active and exciting. Whatever happened to gender-neutral? What message are we sending our kids, especially girls? Don’t worry your pretty little head about it? Grrr… Oh, I know the real reason. It’s all marketing. Just so we will buy more More MORE! Sorry. Not playing that game.

Yeah, I know I could make stuff for them. Not this year. I found stuff that perhaps offends me less than some other things and got the heck out. Christmas shopping done. Now I’m not going near a mall again until sometime in January. Off the soapbox. Before I fall off.

Moving right along. Hey, I finished the curtains! 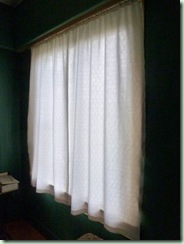 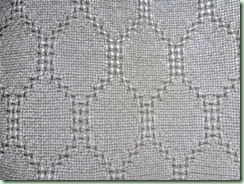 Finishing:  Triple zigzagged the ends, machine washed, hung to dry, pressed, cut in half and machine stitched 1-1/2” hems on each end.

Comments:  It was a wide warp – nearly as wide as my 45” loom. I had quite a lot of trouble with this weaving but I guess it could be chalked up to me being really out of practise. There were tension problems, loom problems, submarine shuttle diving, and lots of skips to fix at the end. Plus I should have wound a 5 yard warp because the finished curtains are a little short. Still below the windowsill though so not a big deal. The width shrank to 34” after washing and the finished and hemmed length is 59”. My notes from the old curtains (1991!) say I used a 4 yard warp but it must have been 5 because the originals are longer and there was a little (maybe 6”) cut off the end as well for a sample. I did have a little more waste this time though (22”) because I couldn’t get a good enough shed towards the very end.

The curtains aren’t perfect but they do the trick. Hopefully they’ll last another 20 years or so. I don’t want to replace them again any time soon.

Now on to something else. Perhaps I’ll finally re-hem that rusty red skirt? You know, so I can actually wear it myself instead of Debbie Double flouncing around in it? There’s also several more refashion/repair projects hanging about waiting for me to get to them. Not to mention all the new things in the queue. Is it just me or do the days seem much too short this time of year? It seems like it’s dark most of the time and we’re still weeks away from solstice. I’m not complaining really. I like seasonal changes. It’s just that these old(er) eyes need more light on the subject than they are currently getting. Maybe I should remember not to knit black socks in November?

Thanks, darlin'! The walls in our bedroom are dark green so it needs the white (ceiling, trim, curtains) to lighten it up. Otherwise I'd feel like I was sleeping out in the forest!

Absolutely beautiful. You deserve an award of some sort for weaving curtains. William Morris would approve - beautiful and useful. God help the unaware person who might say, "You can get curtains at Ikea for only $20."

Thank you, Heather! The yarns probably cost about that much. My time and effort...priceless!

Your curtains are gorgeous with the subtle light-peep of the lace. And having those handwoven selvedges rather than side hems makes them hang so beautifully.