The loom warping went pretty well. Yesterday I finished threading and got the warp wound on to the loom with good tension. It’s only 4+ yards long anyhow so that part is not a big deal. A few cranks of the big handles, a few sticks inserted and it’s done. I forgot to do the tie-up earlier in the procedure but it was not hard to reach under the warp to fix. I happily discovered that I had a little 3-legged stool that fit perfectly over the lower side beams and was much more comfortable to sit on. So many weavers complain that countermarche looms are a PITA to tie up because you have to tie both the rising and the sinking shafts. But really, unless you completely undo everything in between projects (and why would you?), you usually only have to change some of the ties. Then I tested for minor threading errors because there are always at least one or two – especially after being so out of practice. This time there were two crossed threads and one place where I had threaded 2,1 instead of 1,2. Quick to fix. 785 correctly threaded ends accounted for.

Next step was trying to wind the cottolin weft yarn on the pirns. My poor elderly bobbin winder had been somewhat abused by a “helpful” grandson and needed some T-Man TLC before it would work properly again. Then I had to learn to throw my lovely new Bluster Bay end-feed shuttle all the way across the shed. Hah! I made a few annoying submarines and a couple of short throws. Also a few tangles around various protrusions. It went better when I didn’t think about what I was doing. It’s a long reach across 40” of warp! I’d forgotten what a workout weaving can be. Anyway I’m quite liking the huck lattice pattern. Now I just have to weave 4 more yards of it.

At my weavers’ guild meeting last Thursday the speaker was Jean Curry from Alberta talking about the Master Weaver program at Olds College. It was really interesting to hear that there is a course like that available which focuses on the technical aspects of weaving (rather than as a section of a textile arts program) and offers accreditation. It was also really interesting to realise that my self-taught skills have covered pretty much everything they have to offer and then some. I’m not a great weaver but a pretty well-rounded one. I understand how it all works and don’t need to follow a recipe to make my own cloth. I just need to DO IT! Unfortunately somehow the days aren’t long enough to do everything in my brain. Sigh.

In other news I finally got pictures, not particularly good ones though unfortunately, of the last couple of knitting projects I finished. I’ll hold off on the shawl because I want to publish the pattern and the chart is on the other computer. But here are the socks: 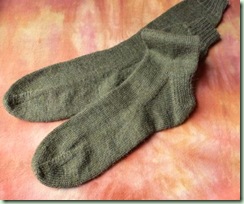 Comments:  T-Man picked this yarn out when we visited a new-to-me yarn shop in Gastown called Wool Is Not Enough. He desperately needs new socks since he’s wearing out several pairs of the old ones.

My needles were empty! Can’t have that. So of course I had to cast on for yet another pair of T-socks. These ones are black Regia with a little hint of light grey in occasional stripes and blips. And then I also cast on for another long pair of fingerless mitts for me, this time in the Hedgerow pattern. My hands must have been cold.

Off to throw the shuttle some more. Pictures coming.