There’s Snow In Them Thar Rains

Yep. Winter is not just coming – it’s here! I know there’s nearly a week until Winter Solstice but I’m calling it chilly enough around here to qualify. I know we don’t get the heavy winter weather like most of the rest of Canada (and a goodly amount of the US) but this is dark, damp, dreary and cold enough for me. My dad, who was from Kamloops which is a city that really does winter up proud, used to say that Vancouver’s rain made you feel even colder than a crisp snowfall but at least you don’t have to shovel it! Handily, today this sprinkle of white stuff is being quickly melted as it shifts back and forth from snow to rain.

So. What has Damselfly been up to? I finished sewing a garment: 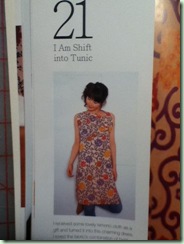 Pattern:  #21 I Am Shift Into Tunic from I Am Cute Dresses.

Mods:  This pattern is self-drafted using your bust measurement (including ease) and simple measurements. I added an FBA below the yoke which ended up gathered over the bust, widened the hem a little and fudged the shoulders because I was somewhat unclear on how they should actually be shaped. I also added inseam pockets because I love pockets in everything.

Comments:  This pattern was the first thing I fell in love with in this Japanese sewing book. I drafted this thing twice, the second time going back to the diagrams and starting over. I actually made a muslin of the yoke section and tried it on both Debbie Double and then me which was very helpful. I had just enough fabric to cut this out – turning the yoke pieces to the lengthwise grain was a necessity as well as a design decision! I also had to work around several fabric flaws.

I sewed it pretty much as the directions showed but didn’t line the skirt. I did add strips of non-fusible non-woven interfacing to the armhole edges before turning them under to stop them from stretching out. Worked well and didn’t add too much bulk to the twice-turned hems. The neckline was on the non-stretchy grain so I didn’t think it was necessary to repeat this on those edges. I used three buttons that have been in my stash forever waiting for the right project: 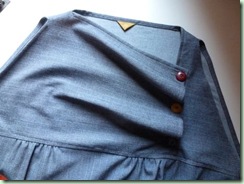 It’s a little hard to see (thanks to dim winter light) but there’s a red, yellow and blue button in the set. The little pop of colour is cute! The interfaced button placket is a little stiffer than the kimono silk used in the book’s example but the drape shows up much better.

This fabric is really ravelly and I wanted a nicer hem finish than just serging it so I used strips of bias from the remains of the poly lining from the Not-Quite-Helena Skirt. Unfortunately I cut the strips somewhat too narrow so I had to top-stitch rather than stitch-in-the-ditch to secure it. Oh well. It doesn’t look too bad but might have been better if I’d used red thread rather than neutral grey: 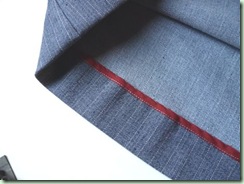 If I was a Good Seamstress I would have used this finish on all the seams but since this was kind of an experimental garment (plus I don’t really care that much about the inside looks), I didn’t. Serging is plenty good enough and probably more durable in the long run.

This tunic/jumper is quite lightweight and will be wearable in pretty much any season. Note that in the photo I’m wearing it with a heavy turtleneck and pants because my house is cold. (What you can’t see are the undershirt and long-johns!) All in all, I think this was a pretty successful project considering I wasn’t at all sure about adapting a Japanese pattern to my body shape. The whole thing cost only my effort – and the book, which has now justified its existence on my bookshelf.

So what’s next? I’m currently hand-stitching on Littlest Grandbeastie Rosebud’s Christmas Stocking. I’m not sure whether this project is terribly cute or complete cat yak. The jury is still out and since I’m not a huge Christmas fan, I’m not the one to ask. At least she will finally have a stocking for the big day! Sorry I won’t be able to show you a photo because her name is featured prominently and my policy is not to share that on the interwebs. You understand, I know. Maybe I can do a photoshopped…er, Paint Shop Pro’d version. (Just plugging my long-time photo-editor-of-choice!)

Once that’s done, I can root through the pattern and fabric stashes and plan the sewing queue. I’d also like to knit another sweater for me, maybe from some of my reclaimed handspinning. Or maybe spin up some new yarn. And I want to weave fabric for a jacket. Traditionally, I get the most done in the studio in January and February. Have lights, will sew!

Also the Holiday Partying starts in earnest this week and it’s going to be way fun for me to not indulge in the wrong things. I’m currently off wheat (like, who isn’t?) and alcohol (thanks to $$$$Meds) and things are looking somewhat better but it’s going to be reeeallly tough to avoid them when eating out. No stuffing. No gravy. No buns. No little quiches and sausage wraps. No cookies! NO WINE!! Whaaaaa!!!! What’s left? Nuts, chocolate, chips, veggies, dip, turkey (ummm…) It’s not like I’ve been losing any weight or anything. Not gaining either so I can’t complain too much. At least I have my coveted GF pancake, muffin and oatmeal cookie recipes to keep me from really feeling deprived. Hey, let me know does anyone want me to put them on the blog?

One last thing. This one is technical so you can go away now if you aren’t interested in hearing about my Evernote tribulations.

Don’t get me wrong, I love Evernote! Free, versions for every platform, very useful – what’s not to love? However, the latest upgrade (ver 4.6.0) does not play nice with Windows XP, which I am still running on both my computers. (And I’m not upgrading until I’m forced to buy a new computer!) It made the Evernote Clipper in Firefox spit an error message and, although I never use this feature, it greyed out the Evernote button in Outlook. I uninstalled and re-installed the program and the Clipper add-in and the problem still remained. So I went on the boards and read that it wasn’t just me – and the power users were bitching about their Outlook even more than the Clipper issue. Some kind person posted the URL so I could download and re-install the previous ver 4.5.10 and Bob’s Your Uncle. Back in business.

Meanwhile I put a ticket in to Evernote Support and heard back from them in only 2 days. Superior service for a free user, wouldn’t you say? Of course they said to do what I had already done but I wanted them to know that they still need to support XP because, hey! Lots of people (especially businesses) still use it! Support came back that they have reported it as a bug to the programmers so hopefully a fix will ensue. Squeaky wheel, grease and all that. Meanwhile I’m not updating again until I know for sure that it’s going to work ok. Plus I’m hanging on to the install file for the one that really does work just in case. I use this program all the time on everything: Damselfly my big desktop PC, Bluet the Netbook, Ruby the iTouch and directly within Firefox. (Yes, I name my computers. Doesn’t everyone?) It’s great for checklists, inspirations (clothing, my fave!), recipes, notes, receipts, whatever you want to save and then have available anywhere on all platforms. NAYY! I guess it’s kind of like Pinterest in a sense but totally private – unless you want to share. That appeals to me more because I don’t like having to decide if I want the world to know my preferences or if it’s something that’s better kept to myself. I share enough as it is!

If they want you off gluten and not just wheat, watch out for chocolate as many brands use barley (malt) for flavouring. Traditional shortbread made with rice flour and butter is still gluten free and yummy. Please count me in for the pancake recipe too!

Thanks for the info, Nancy, but I much prefer pure Belgian chocolate anyhow. One does get spoiled for the real thing!

Love how your kimono shift turned out. You're a brave one for giving it a try. I think I mentioned it before, that I have the same sewing book.

You'll have to try something out of the book too then, right? I can see you in a number of the dresses.