Another Week Tossed Into The Abyss

Sigh. My whining shall be limited to a quick update. Not only am I not really better yet, T-Man now has the flu. Lovely. It can’t be my bug because, hey, he had 3 whole weeks to catch it already. Weeks in which I was snivelling and coughing all over the house and over him too. No, he just had to go out and get a new and even more virulent version! Now whilst we lay about in bed, we’re arguing over who is well enough to go make a cup of tea for us both. Today I have to go wash yet another emergency load of hankies. We need groceries again. This is not fun. I want it over and done now.

OK enough of that. Moving right along. I have a couple of FOs. So what else did I have to do for weeks and weeks but read and knit? I’ll start with this one:

The Biggest Socks Ever 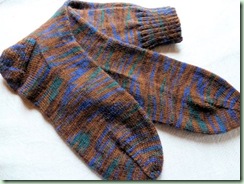 Comments:  Yup, the usual boring plain socks. Youngest Nephew never got a pair of my socks before so he took advantage on Christmas Eve and requested some. He got to choose this yarn on Christmas Day from a couple of options which were somewhat limited since I knew I needed more than the usual 2 balls to finish. Now there’s enough yarn from the second 2 balls left to make some for me! I love this colourway.

Hope he likes them! Haven’t seen him yet to give them away.

I also finished another item but don’t have a photo ready yet. Let’s save that for another post. Of course nothing has been going on in the sewing department but I’ve been following along on Cloth Habit’s bramaking sewalong. I’m determined to get an underwired bra that fits me properly and comfortably! I also joined the Flickr group for the sewalong too. Whether or not I will be posting photos (not sure yet) I’ve still been learning a lot by seeing the fitting issues of others and the advice on solving them. Lovely brave women.

Best piece of information so far was to fit the underwires first, then the band and only lastly the cups. I realised that my previous bra sewing efforts were still not quite right because although the cups pretty much fit, the wires were still digging in at the sides. Who knew I needed absolutely huge wires even though all the measuring techniques tell me I’m a 36D? Arggh. No wonder RTW bras don’t fit unless they are the non-underwire type. If I get the wires right, the cups are way too big! Back to the drawing board. Literally.

To that end I ordered a package from Bra-makers Supply which included some new bigger wires to test and the next-up size range of the Pin-Up Girls Classic bra pattern. I also got Beverly Johnston’s second bra sewing book on CD. The first one that I got a year ago was eye-opening and this one just adds to the vast store of information! Fascinating stuff. Really. I’m still not quite up to diving in and making a tester bra muslin yet. Soon though!

Meanwhile I have to go make a kumihimo braid as a bookmark for the guest book for my late friend’s Celebration of Life on Monday. I hope I can do an adequate job since there will be many people of Japanese decent there. It inevitably makes me a little self-conscious! However all I can do is my best and know that will be just fine. Now I hope I can remember how to braid! It’s been awhile. Yes, there will be photos. More anon.

Hi Louisa,
Still?! Well you know, guys are always sicker when they get sick, right? I joined the bra-along too! I'm so overwhelmed with it, but trying to just take it easy. I ordered from the Fabric Depot which was the cheapest and have just started tracing the pattern. I also got the kit so I wouldn't have to figure out all the supplies. I'm doing Elan. I had no idea I was that size! I still have to add the seam allowances and am even nervous about figuring that out!
I do hope you get well soon.
After having pneumonia, I got both a flu shot and pneumonia shot this year.

So sorry to hear you are still sick, and that your hubby has joined you in your misery. Get over this right now!
Love the socks. Kaafe does such great work with color. I hope your nephew likes them.
Kudos for tackling bra making. I claim to have no interest in it, perhaps because I can get a good fit in RTW. But who knows? Maybe some day I'll need to learn.

Hope you two are better soon.

I am so sorry you've been sick and are STILL not 100%. Then to have your sweetie sick too... At least you have socks to show for it!

Speaking of which, a lovely new friend has offered to teach me how to knit. I'm very excited! I hope that my aversion to anything even remotely mathematical won't be a hindrance. I know there's no way I could possible make a decent underwire bra, for example. Too complex.

Thank you all for your kind thoughts! T-Man is already improving. I'm considering checking in with the doctor. It's been nearly a month already. Sheesh.

Ooh, Jean! I'm crap at math too. However if you can count, you're golden. Knitting is fun. I learned when I was 6! How hard can it be if a little kid can do it? LOL!