I just thought I would write a little more information about kumihimo and my longstanding interest in this particular craft – just in case any of my Dear Readers are unfamiliar with the details. Braiding in general is the interlacement of threads or groups of threads using one set of elements, as opposed to weaving which uses 2 sets (warp and weft). The simplest braid (aka plait) is the 3-strand one we all learn to make in our hair. Braiding goes back to prehistoric times and creates strong narrow ropes or ties for a multitude of uses. Kumihimo (which means “interlaced threads”) was originally used in Japan to lace together samurai armour and to wrap the handles and scabbards of swords. The material of choice has always been silk. Later the fashion was for a braid to decorate the obi that wrapped around kimono. Currently braids are used in decorative items such as jewelry, key fobs, hair ties, bookmarks etc. Cheaper rayon threads have become more commonly used than silk.

Of course these braids are not done just in one’s hands like their South American counterparts! There are a number of tools and stands (sometimes referred to incorrectly as “looms”). A popular and inexpensive way to work kumi braids is on a cardboard or foam circle or square with notches around the perimeter. This works fine for simple braids and is very portable but IMHO it’s not nearly as easy or as much fun as working on a marudai (round stand). I always make way more mistakes on the cards and my tension is far from even even with a small counterweight.

My marudai was made by my resident woodturner, T-Man, (of course!) and although not particularly traditional in shape it works really nicely. The woods are Oregon myrtle for the mirror and base with mahogany legs plus a number of colourful exotic wood dots on the base. My 70g tama (lead-weighted bobbins) were made by Peter Berlin in padauk wood. Because you will not get me to kneel on the floor in the traditional position, my marudai needs to be set on a small stool to reach the correct height for me to sit in a low chair to braid. 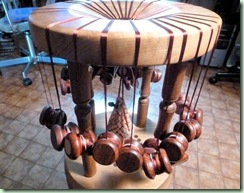 The bag hanging in the middle holds the counterweight (lead fishing weights) at approximately half the combined weight of the tama. You braid by lifting the correct threads (not the tama!) and swinging them around the mirror (top of the marudai) into their new place. The moves are two-handed and most of them are symmetrical or oppositional making it like a dance. That’s where the fun comes in!

Besides the marudai there are other stands for different types of braiding:

As you might imagine, the possibilities are pretty endless! (I’ve coveted a takadai for years. I have the plans for building one. Sadly I don’t actually have a takadai. Yet.) The only North American supplier for all things kumihimo is BraidersHand in Washington State. Janis Saunders is the proprietor and her husband builds the equipment to specs that have been vetted by Roderick Owen and Makiko Tada, both world-renowned braiders and authors of a number of books on the subject. They are lovely people to deal with.

So where did I get interested in this particular textile art form? Somewhere back in the early 1990’s a friend had taken a seminar with Rod Owen and showed me how to do a simple braid on a cardboard square. I was enchanted! Later I travelled to Victoria, BC several times to take workshops with Shirley Berlin, who had studied with Rod who had studied with Makiko, whose mom was the aforementioned Aiko Sakai. (There’s a continuous braid here! Get it?) I also managed to take several seminars with Makiko at various weavers’ conferences. Other than that, the rest I learned from books and just by trying it. I did join the Complex Weavers’ Kumihimo on the Marudai group for a number of years where we exchanged lots of samples with braiding instructions included. Some of the challenges were very exciting, using untraditional materials and experimenting with interlacements. Unfortunately now I mostly just have a tangle of braid samples to show for my kumihimo curiosity rather than any spectacular finished pieces. But dear Shirley would have me tell you that there are indeed many uses for braids! Limited only by your imagination.

If anyone is interested in learning more about kumihimo, I have some files of teaching materials from when I did several workshops for my weavers’ guild. Just contact me privately with your email. Even though I’m not teaching now, I’m always happy to addict another happy fibreholic! Plus there are several ways to create a “quick-and-dirty” marudai. One good one is to drill a hole in the top of a stool. Bobbins can be quickly made with large nuts and bolts. More info in my handouts.

So. On another subject entirely, I haven’t yet showed this FO: 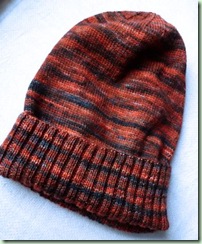 Comments: Very easy pattern to knit so it’s a perfect TV project. The slouchy shape is a different one for me but it’s great for bad hair days like when I need my hair cut badly! This uses up the last of this monster skein of sock yarn. I now have a whole matching wardrobe of accessories – hat, fingerless mitts, and knee socks.

In health news, I’m still coughing but feeling somewhat more human again. We got in a huge restocking of groceries finally, changed all the linens and did laundry and vacuuming. I even made a big pot of soup. It’s amazing how much better one feels when the house isn’t quite such a pigsty! The Evil Bugs have merely stolen a whole month out of my life. Bleh.

I think I need to go make some cookies. Gluten-free oatmeal raisin. Cookies and a cup of tea always make you feel better.

I am SO jealous of you right now!! I discovered kumihimo a few years ago and made a very simple cord, which I absolutely love! I've taken books out of the library on the subject and would love to learn more about it.

Now, if only there was a way of creating more time.

Thank you for your in-depth description and explanation of kumihimo. Very interesting reading!
Your hat looks perfect for this frigid weather. I can just picture you wearing all of your coordinating knitted items.

Ah, I envy you your gorgeous-marudai-making in-house woodworker. Making the mirror is the real puzzler without a power saw and drill press. I made mine from a thrift store teak cheeseboard and a three-legged wire plant stand. It works okay but is not pretty and is only big enough for 8 strand braids. Then I bought thrift store lazy susan to make a bigger one for 16 strand braids, but the oak wood is just not that inspiring, plus purgatory to sand down, so there it sits. Got to get on top of that thing or throw it out.

I didn't hear that you're not supposed to pick up the tama. Come to think of it, I don't do it because it doesn't feel natural, but I didn't realize it was a no-no. Why is that?

Sorry your marudai-making hasn't quite panned out, Trapunto! I'm sure you'll figure out a way eventually.

If you lift with your hands under the threads then the dangling weight keeps correct tension on them. Otherwise if you lifted by the tama that would release the threads to get into trouble! ;)

Louisa taught me kumihimo long distance back in the mid 90's, I still have the cord I made on a beaded purse, but unfortunately not the marudai made out of cardboard or the film canisters full of pennies for the weights!