So are you tired of the Saga of the Bra yet? I haven’t gotten back into the fray today yet. But, in the spirit of attempting to psyche myself up (or perhaps it’s just an avoidance technique), I thought I would wing this quick post by you.

Have you seen the Canadian period drama “Bomb Girls”? I don’t know if it’s available to view in other countries. If it was, I would have thought there would be a lot of buzz on the sewing blogs because not only is it a really good TV show but, hey, wonderful 1940’s clothing styles! Hair, hats, shoes, coats, dresses. And lingerie! Lots and lots of period-perfect bras and panties and slips and pettipants. It’s a treasure trove that IMHO outshines Mad Men! (Admittedly I never watched the latter show.) The premise involves the ladies who work in a munitions factory during WWII in the Toronto area and is one of the most-watches series in Canada. Most of the main actors though are from the Vancouver area. Local peeps! Did I mention the clothes?

Another item that came to my attention today is the new Norah Gaughan collection from Berroco. (Flip-book is here if you wanna see.) Nice knit styles as always from Norah but what I really noticed is the photography: two different models, one thin and one definitely not-so-thin, and no distracting backgrounds or poses, no hair or props in the way. You see the garments and some of their details up close and without all the drama and excess of so many publications. It’s perfect. I love it! I so wish more pattern publishers would get the hint. Vogue, both Knitting and Patterns are pretty bad. But, BurdaStyle. I’m especially looking at you! Maybe you could all save money on your photo shoots and allow us to actually see your stinkin’ garments. Win-win. Unless of course someone actually enjoys all the extraneous stuff besides the stylists and maybe the editors?

So I realised that I hadn’t blogged my last FO: 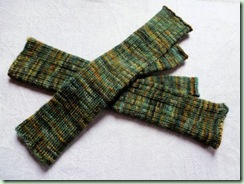 Mods: As written except picked up one extra stitch in the crotch of the thumb and dec it away again on the next round. Saves having holes at the join that need to be stitched up later.

Comments: I obviously like these mitts! For some reason even though this is the third time I’ve knit them, I had a lot of trouble knitting one of the thumbs. I dropped a stitch and didn’t notice until I finished knitting the whole thumb, frogged it down, knitting up again and realised I still hadn’t picked up the dropped stitch! Must have been knitting in the dark.

Now I have a whole wardrobe of green items: sweater, hat, scarf and mitts. And no yarn left.

OK, it’s actually nice out today and relatively warm at 8C. Spring is coming! The snow drops and witch hazels are starting to bloom and the catkins are huge on my hazelnut tree. We need to get out for a long walk before I <gulp!> get back to the Bra Wars. I also need to cast on for a new knitting project because <gasp!> I have nothing on the needles right now. Probably another pair of socks.

Love the colour of the fitted mitts.

Yeah, especially Burda - it's like they're trying to hide the design.

So have you been lost in bra-dom? What Vogue patterns did you receive in the mail? What are you working on?

When it does eventually get released to the US, I'm sure it will be a hit just from the promo's I found online.

Thanks, Valerie! That explains the lack of buzz among the Retro-Girls. I do hope it becomes available eventually. I can find it on iTunes!