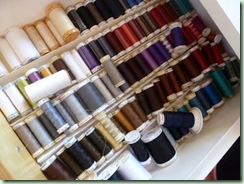 Yeah, I know this is intended for weavers to show off their bobbins and pirns and whatnot. But these are spools too and that’s what I’ve been mostly using lately! I didn’t even tidy up first – just opened the drawer and snapped a pic. Much more fun than that other version of April 1st anyhow.

BTW, how can it actually be April already? We even got to sit outside yesterday and have lunch on the deck in shirtsleeves! I moved Lazy Rosey outside of the greenhouse and into its usual spot in the garden. My rosemarys (yes, there are 2 in the pot: a recumbent and an upright) happily survived this winter nearly intact. I only lost a couple of sprigs off the upright one. I was diligent in rushing out to cover with a flannelette sheet if the overnight temps were going down below –5C and I think it helped a lot. The recumbent Lazy is blooming so prettily right now and is covered with these lovely little blue flowers: 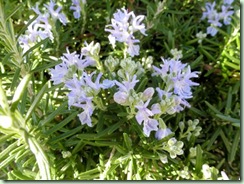 I think it’s the most I’ve ever seen! The upright Rosey right next to it isn’t blooming at all. Go figure.

In other news, I finally finished my latest bra! I’m calling it the Ivory Zebra Bra and I’m very happy with how it turned out. Best one yet! 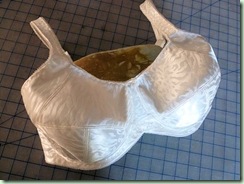 Since Debbie Double can’t wear it and I’m certainly not going to model it for you on the interwebs, my tailor’s ham Miss Piggy offered to stand in. Literally. Isn’t it bee-oo-tee-ful? Fits perfectly and is very comfy. Pretty much all the info is in the last post so I won’t reiterate again. I have full supplies for one more bra, a brown one, before I have to order more bits and bobs from Bra-makers Supply. However, I’m kind of bra-d out at the moment and really want to get on to other sewing.

Which brings me to the advent of spring and whether that should change the crafty agenda. Or not. Do you only make winter-ish items in winter or summery items in summer? Makes no difference to me really. I’ll knit a wool sweater in July if I’m inspired, even if I don’t wear it until October. I figure that I get years of wear out of my garments so when I actually finish them is kind of irrelevant. Of course it helps that the climate here is mild and changeable. We rarely have many weeks of really hot weather in summer and our winters are mostly just cold and wet rather than heaps of snow. One might wear the same jacket in any season. My Minoru in particular has been getting a workout ever since I sewed it just over a year ago. It’s lightweight, water resistant, blocks the wind, is just loose enough to get another warm layer underneath, has a cotton lining for comfort over a lighter layer and looks stylish on. What’s not to love? However it probably wouldn’t be as useful if I lived where it gets much colder or much hotter or dryer. Anyway I’m very tempted to make a version in wool.

I think climate makes a difference in crafty desires. I have actually been too hot to knit but that was while camping in the desert. I’ve also been too cold to knit! Admittedly that was outdoors in a different location but on the same vacation. Heh. My upstairs studio can get rather toasty in midsummer heat. It has actually caused my sewing machine’s foot pedal to overheat and malfunction. It works fine the rest of the year. My big swamp-cooler fan works great but not when attempting to lay out pattern pieces. (Ask me how I know that!) We don’t have air conditioning in our house. Not worth it for the few days a year it might be needed. I know there are places where folks try not to leave air conditioned areas or risk melting into a blob of goo on the sidewalk, right? See what I mean about climate making a difference?

One thing I like to do in the warmer weather is to wash and re-block the woollies. I try to do as many shawls, scarves, sweaters, gloves and hats as possible every year. I have a lot of shawls though and they take the most work to block with wires and pins. I can only pin out a couple of them at a time on my blocking mats. Gloves are really important to wash too because they get pretty dirty touching everything. Then they can rest up all clean and nice-smelling until it gets cool enough to wear woollies again. I still wear scarves a lot in warmer weather but switch to airy cotton ones. Wool socks are the one thing I wear all year around when I’m out walking – no matter how hot it is. No wonder I need to knit socks constantly!

Speaking of which, I never showed you my last Online sock yarn that I got at Fibres West: 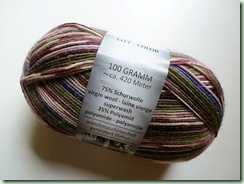 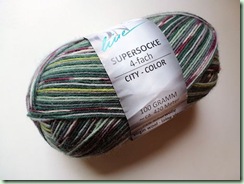 Can’t wait to see what they knit up like. I know these printed yarns are kind of passé now but I find them endlessly fascinating for plain socks. Plus they are much more durable than some of the other options. I would love to find a source of it in white for dyeing. The Canadian online shop I used to buy basic sock yarns from has sadly disappeared.

As soon as there's a hint of the upcoming season in the air, I'm frantic to start creating that season's wardrobe. It was very Spring-like today, warm and breezy. Before you know it, that sun will be intense. I'm strategizing survival in my least favorite season (especially fashion-wise)...SUMMER!!! It lasts forever here, and is beastly hot and humid. I'm thinking dresses this year, a few basic styles that I can slip into and accessorize. Wish me luck!!! I usually end up hibernating as much as possible in the AC.

Hello, lovely Jean! At least you get to go outdoors without covering your outfit with a coat! I have to admit that my favourite wardrobe seasons are spring and fall when you can layer a little before you get too hot. I like layers.

While I love Spring & Fall weather, my fav is SUMMER!! Just tees, shorts & thongs turn my crank. Wearing as little as possible, spinning in the shade, all those blooming baskets in macrame hangers, fresh fruit & huge green salads!!! Man, it's the BEST time of year!

It is quite warm, even for very cold days, especially if you are moving around a lot. I haven't had a chance to test Sheepskin Jackets UK on super windy days or heavy rain, btw, you can find it in sheepskinjackets.webs.com, so I can't attest to performance in extreme weather.