‘Cause He’s Worth It

I just wrote a nice long post and zapped it completely when my netbook computer lost its plug. Grrrrr…

Let’s try again, shall we? The battery is in now for extra security.

I know it’s been awhile. I got sucked into lots of walkies and even more gardening. Gotta do it while it’s nice out, right? We have about 9 months of dreary weather around here so any sunshine we do get has to be savoured carefully. My garden is looking pretty nice. I’ll try to get a photo for next time. We’re eating something out of it every day: salad greens, parsley, chives, basil, kale, gai-lan, rhubarb, onions, etc. Garlic scapes are appearing and the peas and tomatoes are finally flowering. Cabbages are starting to set teeny cabbages. Yum.

Yesterday I spent some quality time up in the studio pasting together the Newcastle Cardigan pattern from Thread Theory. It printed out very nicely with sufficient borders to actually print properly on the bottom edge where most patterns get cut off due to the whopping .7” no-print zone on my old inkjet printer. The pieces went together pretty easily. I bravely chopped out a size M for T-Man though I eliminated the waist curve because he…er, doesn’t. I think the sleeves are a little long too but I can adjust that later. Easier to cut than add fabric!

I was a little disappointed that the design used a facing which is usually kind of floppy in a knit. This time I went with it as drafted but we’ll see how it performs. I might eliminate facings and substitute a more streamlined binding if I make it again. We also discussed it and T decided that he wanted the more shallow shawl collar. He didn’t want to look too “grandpa”. Snort! (The grandkids might disagree.) Or too Mister Rogers. No chance. Nice that there’s the option to make it both ways.

The fabric is an unknown synthetic. (Dressew’s labels often leave a lot to the imagination!) It’s a dark gray and fuzzy on one side and smooth knit on the other. It washed and dried like a dream and cut like butter. Or maybe that was the new Olfa blade? Whatever, I went with a nap layout but didn’t follow the one in the directions because a) I couldn’t see it on the printout and b) my fabric was only 56” wide, not 60”. Come to think of it, I never follow the layout diagrams! Now I still have to experiment with various interfacing options. I’m not sure if fusible will stick to the fuzzy side which will be the interior for cosiness. The decorative yokes will be with the fuzzy side out just because I can. I think it’ll be cool. No idea how it presses or sews yet. It’s pretty thick and very stretchy. Wish me luck.

I also finished T’s next pair of socks: 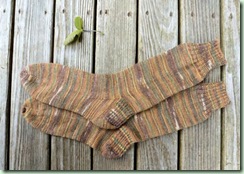 Comments:  This ball of yarn has been in the stash for quite awhile waiting patiently. The bamboo is apparently not the “rayon” version but the real retted bamboo so hopefully it will be a good substitute for the usual nylon content. It’s a nice idea environmentally speaking but we’ll see how it wears over time.

I just chucked out a pair of his socks that were worn down to the nylon content on the soles and completely pilled. They were pretty old (predating my 2007 Ravelry membership) and were knit in hand-dyed Sandnes Garn Sisu which doesn’t hold up as well as some of the other sock/fingering yarns. It’s only 3-ply and not as tightly twisted. I used it because I could get it in white for dyeing from the old Birkeland Bros Wool. (Before they sold and moved out to Abbotsford. Sniff!) T won’t wear bought socks anymore – only hand-knitted by me. Yes, he’s spoiled! Rotten.

Since this is becoming the T-Man post, I did promise to show you his new Cigar Box Guitar that he made at Lee Valley Tools: 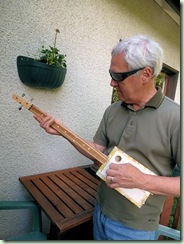 That’s a real Cuban cigar box, Romeo y Julieta. We call her RJ for short. No, he didn’t smoke the cigars first. Yuck. Even if they are the same brand popularised by Sir Winston Churchill. However he did cut out and assemble the parts and sand and polish it all nice. It’s a 3-string fretless tuned in G, played with a glass slide and a pick – you know, in case you care about these things. Yes, it’s reversed from the usual guitar direction. T’s left wrist doesn’t bend properly so he has trouble playing the neck with the left hand. Nice thing about making something is you can customise, right? It sounds deeper than you might think and not at all like an ukulele. He now has a cable and gear to connect the electric pickup to his computer or iPhone too. Can an amp be far behind? Umm…he might want to learn to play it first maybe… 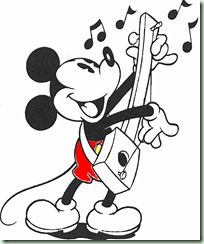 I am thinking ov making Newcastle as well, I will follow your progress.