OK. I’m just going to put it out there. I haven’t been feeling much like writing or even documenting my makes. I’ve actually sewn 3 whole garments and don’t have photos of any of them. One has even been worn and laundered already. Sheesh! Am I feeling alright? Running a temperature? No. Just preoccupied and busy. When I get some computer time I just want to passively read. I haven’t even done my usual mad googling to plan our big trip. I have a feeling this is just going to be a random unplanned road trip across the country. Unless I can start concentrating sometime very soon.

Meanwhile I’ll distract you with the fabrics for my next two pairs of shorts: 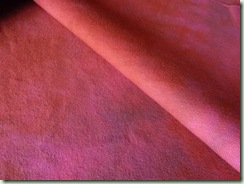 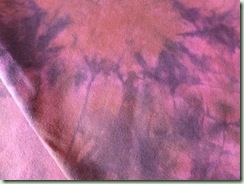 Yup, this is the same freebee fuchsia pink interlock knit that I made into a dress back in early spring. I had fun dyeing these but was a little disappointed that even though I used completely different dyes, the second piece turned out very similar to my dress. Guess it’ll be handy if I want to wear matching shorts underneath, huh? The original colour of the fabric is so intense that it’s not easy to change it unless you use very strong dye. I might have been better off to just try for an even all-over one-colour dye rather than a scrunch-dye effect that left an awful lot of fuchsia untouched. But happily I still have a couple of metres of this stuff left to play with! Later.

The weather has been fabulous – sunny but not too hot. In my world that is absolutely perfect! The only thing that would be more perfect would be a couple of hours of gentle rain each night, clearing up just in time for sunrise. Sadly although it’s close, it’s not Camelot. I end up spending some time watering every day but with T-Man’s help it’s not as onerous of a job as it could be.

Our truncated gardening this year has still produced some lovely veggies. Here’s one of the last of the lettuces: 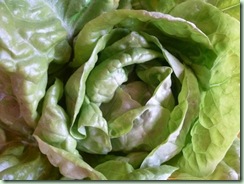 Esmeralda is like an edible bouquet, isn’t she? This green butterhead variety performs really well in my garden. It grows nicely, heads up well, doesn’t get bug-infested and is slow to bolt without getting tough or bitter. Also it tastes very yummy! My favourite.

There’s not much else left in the veggie patch now except cabbages and kale. The garlic is just about ready to harvest, probably today or tomorrow. The peas are done and I have about a kilo of snap and snow peas in the fridge which get added to nearly every meal except breakfast (usually!). The walking onions are nodding down with their little bulblets reaching for the soil. I’m trying to walk them farther south in their bed but they always want to go their own way. Brats. Not as bad as the asparagus though. Their feathery fronds are taller than me now and they are everywhere around the centre cage where they were originally planted many years ago, except in the middle where I want them.

The blueberries are amazing this year. We have two large old bushes, one earlier and one later variety. The earlier one usually has fairly small berries but this year they are much bigger and the other one, though still mostly green, are like plums they’re so big. And just loaded. We are madly picking and freezing what we can, raspberries too. We sadly won’t be getting any of the blackberries but at least the alley side will attract the usual hunter-gathering neighbours. They just can’t control themselves. We don’t mind but it would be nice if they showed up when the prickly beasts need pruning too, wouldn’t it?

There are green tomatoes in the greenhouse but none have ripened yet. There are also flowers on all the beans but no beans yet. I really wanted some before we leave but time is short. I didn’t plant any squash or cucumbers because I knew they wouldn’t be ready for sure. Most importantly my precious Japanese indigo is doing very nicely and I will get one chance to use it with a friend from my guild. She’s coming over to learn how to dye with fresh indigo and I was happy to at least harvest it once. It just seems silly to grow a whole patch just for seeds for next year’s crop.

Speaking of which, the woad that I’ve left to flower has seeds that are slowly maturing. They aren’t ready yet and I may have to just leave them in until I get back. Though they might escape if I leave them too long! I already have many tiny weld plants that I don’t want. Maybe I can leave instructions with the house sitter? But not unless I have to. There might still be time but if I harvest the woad seeds too early they won’t be viable. Ask me how I know this.

I’m slowly getting the important things done. The kitchen and bathroom cupboards have been mucked out. I still have some cleaning and tidying but there’s no point until the last minute or I’ll be doing it again anyhow. We’re going out for a family BBQ this evening so I guess I should get something useful accomplished before then. More anon. Eventually…