Well, we’re still here in Kouchibouguac National Park in delightful New Brunswick. Apart from the bugs we’ve been having such a lovely time we actually stayed 3 nights! A first for this holiday. Luckily the bugs can be survived by a combination of our Mosquito-Free Zone behind my, ahem, ingenious netting and the really nasty bug spray with 90% DEET. That, my friends, is the only damn thing that works. The pitiful 25% stuff is useless. I think the rats have been using it instead of us: 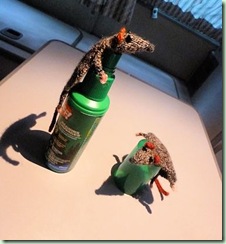 Frightening thing is I do believe I’m actually getting used to the smell of repellent. Is that a bad sign?

It dumped rain along with thunder and lightning the first night here. Even though we had the awning out, my bed got a bit wet before we could move the netting and shut the door. Not a big deal however, especially since the rain had stopped by morning.

Not that the sky didn’t look a little ominous anyway. Later after breakfast we went on a really long ride (for us anyway) of about 25K. There are fabulous bike trails here, nice and wide and well-signed. T’s electric assist controller was wet from the rainstorm so it wouldn’t work. We forgot to cover it after the last time! Doh. So he did it all without any help. Even though I had my assist I was still tired by the time we got back. We walked out on the boardwalk over the lagoon to Kelly’s Beach which is out on a sandbar. 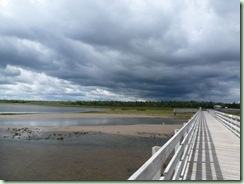 See what I mean about the ominous sky? It was absolutely lovely to smell the salt water again. This is the Gulf of St Lawrence so not quite the Atlantic Ocean yet – but close. We walked along the sandbar for quite a way: 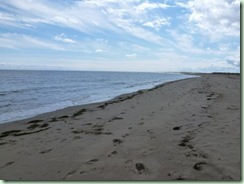 We saw lots of sandpipers and a couple of grey seals poked their heads out of the water offshore. No sign of the rare piping plover who nests on these sandbars though.

The lagoon is lovely: 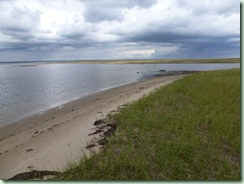 And it even had a heron fishing, just like they do at home. He/she’s that teeny dot in the water near the middle of the photo.

We continued around the bike trail but it started raining just as we were passing some large teepees at Callendar Beach. We and another cycling couple dove for the relatively dry spot just as the rain started pelting down in earnest: 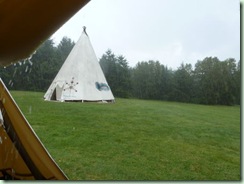 We ate lunch on the benches in the teepee and chatted with the other couple who were from St. John while we waited for the rain to stop, which it did – right on cue. Amazing really. If this was home it would be raining for days!

Today it was cooler but sunny – absolutely perfect weather – so we went out on our bikes again in spite of the fact that T’s controller still wasn’t working and my battery is nearly dead. We have to get a campsite with electricity because the converter doesn’t have enough juice to charge such a big battery. We went along the Kouchibouguac River for about a 13k round-trip.  The river has a rich red-brown water: 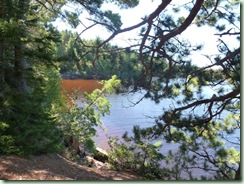 The forests here are mixed hardwoods and conifers: pine, birch, maple, spruce, tamarack and a whole lot more that are harder for me to identify right away. We found a baby sugar maple that had been planted in memory of someone: 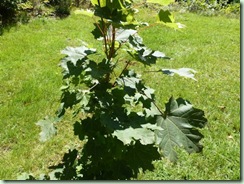 He obviously used to tap the maple trees for syrup because the title on the sign was “tree of life”. So poignant.

We’re in our 4th time zone, Atlantic Daylight Time, and tomorrow we’re off to our 8th province, Prince Edward Island. Not to worry. We’ll be back to New Brunswick very soon. We haven’t seen the Bay of Fundy yet. And have I mentioned how much I adore the cheerful, helpful, friendly New Brunswick people? Plus I totally envy the way everyone we’ve met so far can switch from French to English at the drop of a “hello” in response to a “bonjour”. It’s amazing. I swear this is the most successful blending of our two official languages in the whole of Canada. NB should be commended.

PS Sorry I haven’t really been able to reply to comments. With the flaky internet connections we’ve had, we’re lucky to get anything at all. However I’ve been reading them when I can. Glad you’re enjoying my…er, the Flat Rats and their travelogue! Next post from Wherever. À bientôt!

I've been enjoying the read. This sound like a great trip. When I moved to Toronto ten years ago... (Yikes... Has it really been that long??) It was all on the Trans Canada so I missed some neat stuff.

Will have to do it again when the kids are older I guess.

Anyways, we're off to Alaska on a 7 night cruise tomorrow so I'll catch up when we get back. Have fun. :)