OK, maybe not quite that far. Definitely well over 10,000 kilometres anyhow. We don’t really know how far we actually went because the odometer in the van has been broken for years. But it sure felt like a long way! T drove and I navigated – what a team, eh? A total of 9 provinces and 14 states in two months, all the way from the Pacific to the Atlantic and back again.

Here’s the Official Back Again photo: 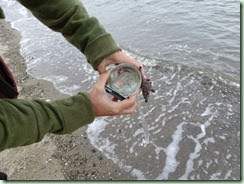 The jar of Atlantic water has been duly added to the Pacific. Oddly enough it was much colder at Locarno Beach than it was at the end of July! I was grateful for my warm jacket and I did not go wading. We did manage to pick a moment when it wasn’t raining however, which was a plus. Judging by the cold wet weather we were really wise to come back a few days earlier than we’d originally planned.

This post’s title comes from our Theme Music for the trip, Eliza Carthy and the Oysterband’s livelier version of Mary Chapin Carpenter’s “10,000 Miles” (from the movie Fly Away Home). I was trying to find the recording online for you, but sadly no can do. It was our morning wake-up call on the iPhone at 6am nearly every day – no matter the time zone. And we went through 4 time zones, both going and coming. It’s no wonder T and I have been sleeping in late ever since we got home!

My million mosquito bites are finally fading away but poor Fraulein, the Westphalia, has a few scars from her long journey. Besides the new starter coil in Ottawa, the bad oil change in St. John, and the good oil change in Woodsville, NH, she has a hole in the canvas top, a hole in the back seat upholstery, lots of new stains on the rug and 2 dings in the windshield. She’s also still wearing the remains of the Saskatchewan gumbo and a whole lot more dirt inside and out as well as a generous coating of bugs on the front end. Surprisingly not much washed off in all the rain though the undercarriage is pretty clean now from splooshing through giant puddles. I can repair the canvas and the upholstery and wash the inside while T washes the outside but the windshield needs replacing yet again. We were very lucky that the dings, one of them nearly all the way through the glass, didn’t spider because there were very few places that we could have gotten a replacement on the road. It has to be special-ordered. Just another holiday expense, right?

We’re still unpacking, organising and generally getting settled back in our home. And I’m still finding items that belong to the house-sitter! I think I’ve finally stopped dreaming about maps all night. I hope. We both agree that that there will be no more marathon trips in our future. It was really too long to be away although it was definitely an incredible once-in-a-lifetime journey, checking off a whole raft of items on our bucket lists:

We found that almost everywhere has its own beauty if you look carefully. Who knew that the trees, mountains, rivers and lakes in the east don’t look at all like the trees, mountains, rivers and lakes in the west? Even the rocks and soil are different. I was surprised at how empty of people a lot of places seem. And conversely how full of big trucks the highways are in southern Ontario, Michigan and Illinois! We didn’t socialise much but almost everyone we met was friendly and helpful. It was a definite learning experience for us both.

Sorry there was no way we could stop in for tea, Pao! And yes, Heather, Mt Rushmore was smaller than you imagine. But you can see it from a lot of different vantage points, my favourite being the one through the tunnels on the Iron Mountain road. Thanks, Mary and Jean and everyone for all your comments on my posts. Sorry I couldn’t reply individually while we were travelling. I’m still waiting for Universal Wifi!

Of course I have to mention that the Flat Rats really enjoyed being the centre of attention on this trip. They went everywhere with me in my camera/water bottle bag with their heads sticking out so they could see everything! They even went through the caves with me. When they weren’t being carried about, they resided on the dashboard so they could watch where we were going and direct if necessary. I think their lives are going to be very dull now that we’re home.

Since this is supposed to be a craft blog, I know that subject has been fairly absent lately. I haven’t really mentioned the knitting that was accomplished in the last two months. I’ve finally got everything blocked (except for one pair of socks that’s not quite finished) and will do a post on it all very soon. Knitting kept me occupied during the long drives – when I wasn’t navigating. And the more complex shawl was fun to work on in camp when I didn’t feel like reading after a hike or a day’s driving.

welcome back from your vacation. What a wonderful trip. I can't believe you set an alarm clock. We would have to take another month to pack in all that you did, with our late starts.

Wow! What an amazing trek. Welcome back to the left coast. :)