Just blowing in to say that I’m going a little nutso trying to finish up the last of the ribbing on my Simple Tweedy Pullover. I’m kind of done with knitting this thing and really want to get onto something new. Nearly there. And then some buttons sewn on and a final wash and block and we’re done!

And no, I haven’t done anything else on my Tilton Skirt either. Gardening has taken over a lot of my energy these days while I’ve been tenderly nursing my tiny little plant seedlings. A whole plethora of them are now in larger digs. (Ha-ha! Get it?) All the transplanted spring greens are currently being subjected to what we call The Daily Schlep: outside in the morning and back in at night until they are toughened up enough to go into their permanent homes in the garden. If it’s raining like it is today, the flats go in the greenhouse. Otherwise they go on the deck. Now I still have the lettuce and the woad and a few other things to transplant so they can join in the migrating. Better get to it quickly too because the real estate under the grow lights is beginning to come at a premium! Lots more little seedlings are needing the lights and I still have more yet to plant. An urban farmer’s work is never done.

The other thing we managed to do is get the peas planted and the poles in for their nets. Unfortunately this year the nets really need replacing. These ones are only about 20 years old! Poor things are developing more and more gaping holes which I’ve been tying together with string for several years now. Old fishnets are not expensive. We just need to get to the gardening shop and pick up some new ones. At least I’ve got a couple of weeks reprieve before the peas will be up and needing some support.

Just so this isn’t a totally photo-free post, I promised to show you the cute little cigar box amplifier that Thom made to go with his cigar box guitars: 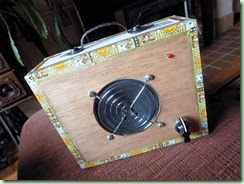 Doesn’t look like much but it really does work! Hot stuff.

Poor Thom can’t work in his basement studio currently because he decided that it needed some major TLC. So all the furniture, tools and chunks of wood have been hauled away from the outside walls. The lower part of the walls have been scrubbed clean of mildew stains and spider crap, scraped, undercoated and repainted a nice fresh white. He even kept going out into the area where the grow-op and the basement door is located and cleaned and repainted all the concrete foundation. He’s currently painting his studio door too. Of course when he’s done I’m going to have to go through all the cupboards above and below the grow-op counter and clean them up. I guess I don’t mind him making work for me because it’s something I’ve been meaning to get around to for quite awhile.

It’s amazing how much junk collects, especially when you’ve been living in the same house for 35 years! Maybe that’s why people move so often? I always joke that maybe we should move the whole contents of the house out in the yard and only move the stuff back that we really want to keep. The suggestion hasn’t been met with any enthusiasm however. So instead we just get to one little area at a time before we both run out of steam or get sidetracked by another project.

Speaking of which, I’m determined to finish this darn sweater today! Better get to it.