Oh man, I am totally sick and tired of computers! Today was Day 3 of the preparations for XP-Mageddon and I’ve just about had it. I’ve downloaded and upgraded just about everything I can darn well think of – on two different computers. I still have to do some major backing up though. I’m not quite as ready as I would like to be. Yet. I see at least one more day of this crazy obsessive stuff in my future. After that I’ll be as prepared as possible. And then let the chips fall as they may. They can’t say I didn’t try! And no, I don’t care if there are no immediate consequences. There will be eventually. No computer system lasts forever. Ask me how I know.

I’d rather talk about something else right now. Oh, I know! How about my latest sweater? 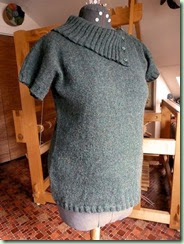 Needles:  Needed to go down a needle size to get gauge so 2.75mm for the bottom ribbing and body. Used 2.25 for the button plackets and began with that size but shifted up after a couple of inches to 2.5mm for the collar and sleeve ribbing.

Mods:  Because my lower half is 2 sizes larger than my upper half, I began on the XL and decreased over 6” to the M between the hip and just above the waist. Worked out perfectly. I didn’t manage to pick up the required amount for the M collar but went with the smallest size there.

Comments:  Note that the photos are much lighter than the real thing. This stuff is nasty to knit with (harsh with dust, spinning oil) but softens and fulls a lot with washing. It’s still not next-to-the-skin soft and sadly pills some in wear but I do like the blended colour and the fuzzy woolly texture. Nice to get some use out of it after it’s been hovering in the weaving stash for many a year.

This pattern is well written and not particularly difficult but not really as simple to execute as the name would intimate. I actually used the iron to steam the armhole and neckline area before seaming because it was curling rather badly. That tamed it down enough to work with more easily. There’s a lot of seaming and picking up stitches involved. Lots and lots of small stitches on little needles. 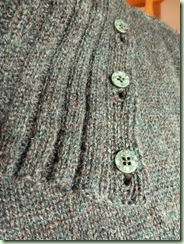 I was really glad that I got a dozen buttons. The instructions suggest stitching extra buttons on the front of the collar right next to the button holes on the side that is up when it’s open. They are hidden when it’s buttoned up as a turtleneck but show when it’s unbuttoned to the shoulder. My extra-small gauge on the button bands meant that I had more and smaller buttonholes than the pattern instructions would imply. I think it turned out really wearable in the end. I love fine knits! Now I just have to make Debbie Double give it up. She likes it as much as I do. Maybe it’s cold up in the studio at night? Guess I need to make her something else to wear first.

So I have no idea what project I’m going to knit next. I have quite a few options in the queue. And there’s still the Tough Love Retro Rib Socks on the go. I’m nearly down to the heel flap on both socks. Obviously I’m much faster with this pattern stitch the second time around. Since this is a trial knit for Sweet Georgia’s Tough Love Sock yarn, I’m quite liking it. The Phoenix Rising colourway works out in spiralling stripes around the leg: 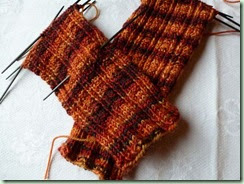 Although I’m quite fine with these black, red, orange and gold stripes I’m starting to find myself preferring more semi-solid colours these days. Either that or a very long colour change, longer than you can get by dye-painting a regular skein. Just something to note for future purchases. Or dye experiments. Colour blending?

I also have a lace shawl that’s been sadly neglected for the last few months. Poor thing. Maybe I’m kind of over triangle shawls for the moment? Instead I’m rather hot for sweaters and I have plans to actually spin for a new project. I don’t care if the weather is warming up. There’s still lots of sweater time left here or, if it takes too long, there’s always the promise of some cooler weather to wear it in sometime. I have dyed wool and a drum carder and spinning wheel and I know how to use them! It’s been awhile since I’ve spun anything at all so it’ll be fun. But first I need to finish up a few sewing projects that I’ve been neglecting. Always something new to look forward to! No, I am never bored. How could I be?

Spring moves on apace here in Lotusland. My tomatoes and Japanese indigo plants are coming up under the lights. I actually left my early baby plants out in the greenhouse tonight. It’s only supposed to go down to 7C from the (rainy) 10C it’s been all day. That’s nearly 45F. They’ll be fine. As long as the slugs leave them alone. And they’d better if they know what’s good for them. I can be ruthless where my little plants are concerned. Grrr….

Very classy looking sweater! I hear you on knitting with weaving yarn - I have a cone of a gorgeous orange that I have been meaning to turn into a sweater for years, but the feel of it turns me off so much I intend to skein and wash it before knitting. It's on the list, really it is! I am very impressed that you persevered - it's lovely!

Thanks, sweetie! I LIKE plain knitting on fine needles. Round and round...

Yes, washing before knitting is much more pleasant. But I was too lazy to skein this stuff up first!

I have no idea what you are talking about, but the sweater does look great style-wise! And I refuse to talk about computers until I absolutely have to. oh no.

Good idea to stay mum on the computer thing! Tomorrow is the day they cut off support for XP and I don't even care. So there.