Hope all the moms out there had a lovely Mother’s Day! I did. The weather was a perfect spring day and we spent most of it with our son Simon and his family. He made wheat-free waffles with whipped cream and strawberries for brunch then we all went for a walk by the Coquitlam River and finally ended with an early sushi dinner. Yum. Then I came home to a very cute phone message from the Littlest Grandbeastie wishing me a Happy Mother’s Day. The festivities continued yesterday when we took Thom’s mom out to the garden shop for lunch and plant shopping. Lunch was really good but they didn’t have everything we wanted so we finished off at a second place with more selection. I got several pretty coleus, stripey yellow violas and better basil than what I can grow myself. Also salvinia (floating fern) for the water garden. Now I’ve got everything I need for this year’s growing adventures. I’m running out of room for anything else.

Today I was back out in the garden planting my cucumbers and squashes. The weather has been warm enough for a couple of days and hopefully it won’t deteriorate too much at least until things get established. I also planted the rest of my beans and now the veggie garden is nearly full and the dye garden is done. Only weeding and watering left to do for the next while. Feels good to get that finished. Now we can concentrate on the front garden and clear some space to plant the rest of my bedding plants. I still have lots of marigolds which can always go in the veggie garden if I run out of room elsewhere. I love flowers in with the edibles!

Some of the edibles even look as pretty as flowers: 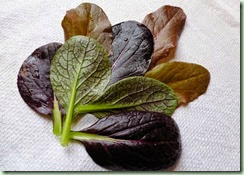 The dark leaves on the top of the pile are red komatsuna. It’s also called Japanese mustard spinach but this dark purple-red version with the red veins on the back of each leaf is just so pretty! Even better for you than spinach, the taste is fairly mild especially when young and can be eaten raw or lightly cooked. Then underneath these are the strappy bronze leaves of a new-to-me lettuce variety called Cimarron. They just glow in the sun and are a nice contrast with the chartreuse green leaves of my other favourite lettuce, Esmeralda. Cimarron is a romaine type while Esmeralda is a butter lettuce. Yes, I like my food to have pretty colours too, don’t you?

It got too hot in the sunshine to work this afternoon so a break was welcome. Not that I’m complaining about the heat! I’ll be heading out in the shade to clear off the space for the cactuses to spend the summer but first I actually have a Finished Object for you: 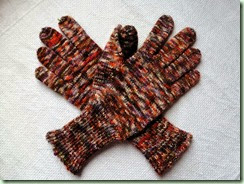 I finished knitting one pair of more-or-less matching gloves and am now halfway to finishing the second pair which do not go together in any way that pleases me. They will be overdyed something dark and then I will be happy to have 2 pairs put away for next winter to replace the ones that I was forced to heave out. I need more than the single pair of gloves with fingers that I was left with – at least one pair to wash and one to wear. They get pretty grubby even when covered by fingerless gloves for a second layer of warmth. I like to clean gloves frequently in winter to avoid catching colds and flu from touching public surfaces. Hey, sounds paranoid but it works! I usually get only one or at most two colds in a year, usually thanks to the Snot Fairy, aka Rosebud or the Littlest Grandbeastie. Daycare is a germ incubator for sure and it seems as if I can never wash my hands enough when she’s visiting with a runny nose. Good thing she’s incredibly cute.

So that’s the story for now. I have to go scrub my dirty toes. (How does that happen?) More soon!