Happy Blogiversary To Me!

Yup! Nine years today!!! Whoo-hoo! Who’d a-thunk it? That I’d keep this nattering up for so long? And who knew anybody other than myself would want to read it? I LOVE YOU ALL, DEAR READERS!!! Thank you for being you.

This is my 1,440th blog post. I have 20 followers on Blogger but I know there are more who follow me using other methods. You are sneaky! So far I only have 1,955 comments. Pretty sad compared to some other bloggers but hey, I’ll take what I can get! I repeat – you are sneaky! At least as far as I know you are all dear, kind and civilised people which is more than I can say for some out there. We will not speak of all the spam that Blogger has caught for me before it got published. Even if some of it is pretty amusing. Assuming it’s in a language I can kind of understand. Some people need to get a life. I’m not speaking of you all because you already have one.

Yes, I know mine is not one of the popular blogs with lots of traffic but that’s just fine with me. I admit that I might bore some people who have very specific interests. Being the damselfly that I am, I tend to flit around from one project to another: a little sewing, a little knitting, a splash of dyeing, a whole lot of gardening and a sprinkle of whatever else takes my fancy. And today we have spinning! For the first time in sooooo long I’ve begun a spinning project. As I said yesterday, it’s the only way I’m going to get the yarn for a new sweater. Besides, I actually enjoy spinning. I needed an excuse to get with it.

So I finally got with it. It’s been a long time but I guess it’s like riding a bicycle because I can still spin! I did try something new for me though – using a blending hackle. I’ve had this Forsyth hackle for several years now but had never even tried it yet. Sad, really. I bought it during the BR period (before retirement) when we had more discretionary income and I was collecting supplies in anticipation of leaner times. Well here they are! Leaner times, hello.

I watched a few You-Tube videos before beginning just in case there was something I hadn’t understood about using my hackle. Luckily Susan and Andrew Forsyth made some very helpful videos to help me get started. The one on the hackle is here. I also own their mini-combs and clamp set so while I was at it I watched that set of videos too. The Forsyths are local to me and Andrew even belonged to Thom’s guild, the Greater Vancouver Woodturners. Sadly they are out of production for now and hope to get back into it again in the fall. I hope so because they make lovely equipment. Wish I could afford a set of Russian paddle combs as well but it’s hard to justify when I already have so many tools. The little mini-combs are pretty good at removing short fibres and neps, noils and vegetable matter anyhow so probably they are sufficient to have in my collection. I also own a set of English woolcombs by a different maker, Jim Sweitzer, who is no longer in business. Not to mention the two drum carders, several sets of hand cards and of course a flick card or two. Do you think that might be enough for just about any type of fibre prep? Hope so. I have a rather large fibre stash to deal with.

Anyhow, back when I did an inventory of said fibre stash I put aside a box of various wool roving bits that I thought might play together nicely. I was going by colour rather than type or length or anything so the pile included everything from soft merino to a rather coarse Romney with a lot of Perendale in between. The fibre lengths were also not too consistent and there was some matting from all the various dye processes. Not all by me either. I spent quite awhile yesterday dividing each roving into 18 equal lengths and then sorting them into piles. I tied each bundle together with one of the longer pieces to keep them from getting mixed up. Isn’t this pretty? 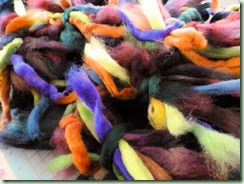 That’s over a pound and a half which should be sufficient for whatever sweater I decide to make. Here’s the hackle: 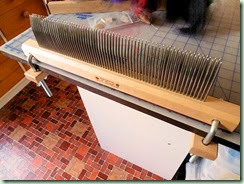 Looks a bit scary but it’s not nearly as fiendish as my English wool combs! Andrew kindly includes a safety cap to put over the tines when you leave it. And here’s what it looks like when I’ve loaded 1/4 of a roving bundle on: 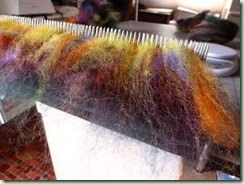 In this arrangement the colours are lashed on horizontally. There are other ways to do this also, each one giving a different effect. I dizzed off a nice top, moving side to side until there was only short bits and noils left: 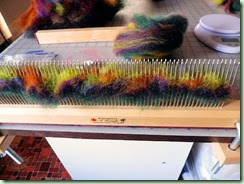 I think because there’s so many differing fibre lengths and some neps and noils the waste weighed nearly half of the original rovings: 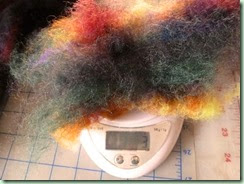 Hopefully I can card this waste together with something else and make some even more tweedy yarn for another project. I’m not wasting the waste! That leaves just over half for the top: 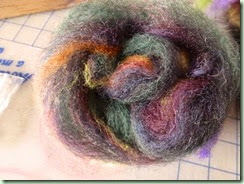 And even this top isn’t all that nep-free either. But that’s ok because I like the tweedy effect in this little sample skein: 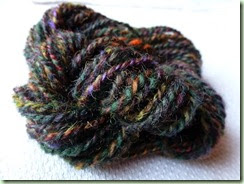 I’m calling it Rainbow Dark. Interesting to me how all those colours, darks and brights, can blend together into something that isn’t at all garish. In fact it’s rather subtle. I like it! Not particularly soft but not too scratchy either.

More as this saga unfolds! Right now I need to get moving. There’s groceries to get and gardens to plant now that it stopped raining. Time waits for nobody.

Wow! Wow everything. Blogging 9 years is really something. But spinning your own yarn is like something out of a fairy tale - totally magic. Now that is really making something from scratch in my book. Way to go Damselfly!

Nine years! My goodness, you began in the dark ages of blogging! Congratulations on your perseverance!
I love coming here to see what you've been up to. And today, that top and yarn is just beautiful. Looking forward to seeing your completed sweater!

Happy anniversary Louisa! Thank you for your fun and always so enlightening posts. I admit to looking up quite a few of your links... Witty, generous of your experience and knowledge, I salute you!

wow! nine years is quite an accomplishment. I love your variety of topics. HAPPY, happy blogiversary.

Thanks so much, my dear friends! It's so nice to write for somebody besides myself. And hearing your appreciation means a lot to me. {{hugs!}}

Belated Best Blogiversary wishes! It's still a treat whenever I check blogs and find you've posted. I love that we never know what you'll be working on/growing/doing next. But sure to be colorful and include good tips. Thanks, Damselfly.

Nine years is indeed an achievement. Your diverse interests keep the reading interesting. And the hackle is a somewhat milder looking tool than the English wool combs I remember demonstrating at a guild meeting. The ladies were hanging onto the table for dear life!

I have English woolcombs too, Heather. Let's just say it's a good idea to keep the tetanus shot up to date!

My Gawd, out of the Dark Ages of Bulletin Boards cometh your Blog! Not too shabby old girl, not too shabby. Congratulations.