One Down, One To Go

Well, I survived the first kumihimo workshop but I’m not so sure about my poor students! I always want to give them everything I know about a subject which does tend to overwhelm too much. I can’t help it! Of course they were all feeling a little intimidated so I dialled back the information and just concentrated on giving them the basics until everyone was more relaxed. By the end of the day brains were melted but hands were getting the rhythms down so we were all happy. Two people bought their marudai kit to take home. It’s kind of improvised (a folding stool with a hole drilled, 16 nuts’n’bolts for bobbins, a chopstick and a little counterweight bag) but it works nicely. I hope there’s enough sets left for the next class on Thursday.

Through some confusion 2 students didn’t show up so there were only 4 in Saturday’s class. Later I heard from one who thought she was signed up for Thursday so I told her I’d squeeze her in. Not sure about the second missing person but if we have 8 it will be a definite squeeze! Especially if the weather doesn’t cooperate because it sure worked a treat having it out on the deck – even with the walnut tree throwing tiny baby walnuts down on us. (Those are the ones that didn’t get pollinated.) It was sunny but not too warm and we had plenty of shade. The breeze tossed my notes a couple of times. (You’d think I’d learn to weight them down, wouldn’t you?) We had a lot more room outside and the bottom step was just the right height to reach the marudai properly from a chair on the grass. No standing to work – except for me. Here’s hoping it goes as well with twice as many students on Thursday. According to the weather report they’re calling for sunny with cloudy periods and a chance of showers. Who knows if that’s true or not? Not ideal. But I’m sure we’ll manage somehow.

Backing up to last week’s Spectrum dye session, I have photos. The first two are Bonnie’s: 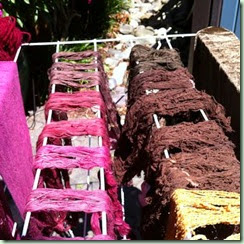 This is a bunch of everyone else’s skeins, divoré velvet and other fabric samples on the drying rack. The dyes were cochineal (bright pinks/fuchsia), logwood (deep purple-blue), and osage plus iron modifier (browns/khaki). And here’s Bonnie’s little pieces of wool flannel fabric. Most had leaves pressed in and shibori tied: 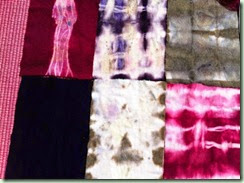 Here’s my items after they were rinsed and dried: 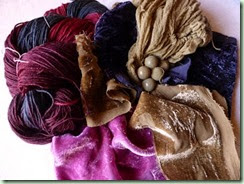 Top left is superwash wool/nylon sock yarn (one end in logwood and one in cochineal overlapped to purple in the middle), some divoré samples from the different vats, and the piece of creped wool gauze with marbles and some shibori stitches tied in. The logwood came out very dark on the silk/rayon velvet and the wool but much paler on some of the other things in the dyebath. We were hoping for more of an olive green with the osage/iron bath but got more of a slightly greenish tan instead. Oh well. Love the colour you get, right? I might do some overdyeing in an indigo vat with the shibori piece later on. The “bubbles” and the maki-nui stitch’s textures should remain after the ties are removed – as long as the piece doesn’t get wet ever again! I’m also hoping for some colour contrast where the ties were. Some darker areas will be better. Can’t remove the ties until I’m done messing with it anyway.

The other good news is that I finished spinning all the yarn for my next sweater: 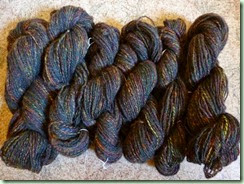 That’s 6 skeins, 530g, and somewhere around 1400 yards of 2-ply worsted weight yarn. I’ve already got them all wound into balls and cast on for the collar (though it’s really more like a yoke) in garter stitch. So far it’s looking very good but no photo yet.

The Harvest Moon pattern by Heidi Kirrmaier is very nicely written and it wasn’t too hard to work it up into something that would fit me better. I’m morphing the sizes up as I go, beginning with a medium for the yoke. If I have enough yarn I’m hoping to make it a little longer than the pattern states as well because I like my sweaters between 16” and 18” from the underarm. That means starting the pockets a little later so I hope that doesn’t drop them too far down on the body, a definite concern with my short arms. We’ll see how it goes. It’s only knitting and it can be reversed if necessary! I like that. It means you can take chances and easily rip it out if it doesn’t work out. All you’ve lost is a little time. It’s so worth it to get a good result.

The garden is growing, the bugs are munching and we’re trying to beat them to the produce. The poor scarlet runner beans look like lace but they’ll hopefully soon outgrow the tiny little yellow slugs that eat them in the middle of the night. Also the tomatoes have flea beetles as usual but that doesn’t slow them down much. I’m very concerned about the small variety of cabbages which are not doing well at all. The regular big ones right next to them are just fine, if a little nibbled. No idea but something is getting their roots and killing the whole plant. Boo. Those are the things you live with in an organic garden. I need to plant some new seeds. The lettuces are heading up now. Earlier in the season I could pick a few leaves from each plant but now there are way too many of them for us to eat before they all bolt to seed. Oh well. Still getting kale buds but the Chinese and Japanese greens are definitely bolting now that it’s too warm for these early season plants. I still pick the flower heads off the same way as the kale buds. We almost have peas! And garlic scapes are coming! I love my garden.

Be back when I have something new to share!

Wow, what fantastic results from the dyeing! And I'm sure everyone in the kumihimo workshop loved it and you. Good luck with the next one, having an overfull class is not as much fun.