OK, gotta say that yesterday was a weird one. Thom went off in our MINI Cooper to take his mom grocery shopping. The MINI’s battery died in the parking lot. Automobile Association to the rescue but they only had time to jumpstart it so while mom was shopping, Thom drove home to switch to the VW van to go back and take mom and her groceries home. Later BCAA came back to bring a new battery to the poor dead MINI. Crisis averted. Good thing we have two vehicles.

However, that’s not all. While Thom was off being Dutiful Son, I got a phone call from his brother who was supposedly off on vacation with his wife in their Westie. Sadly their van which is exactly the same age as ours did almost exactly what ours did last autumn and a bearing broke in the transmission. Unfortunately unlike ours it didn’t get them home first and died just outside of Pincher Creek, Alberta, not even halfway through their planned holiday. Also a mere 1,177 kilometres away from home! Of course there’s nobody anywhere near there that can repair a 25-year-old VW so they had to have it towed back to Vancouver on a flatbed trailer. So tonight they ended back with it at the same repair place that recently repaired our van and Thom has gone to help load all their belongings, including bicycles, into our van to take them home. If they’re really lucky they can get it fixed soon enough to at least enjoy some of the rest of their holiday time. Or not. If it were me I’d be afraid to get too far away from home again until I knew it was really fixed! Oh wait. We did that already with that little trip to Manning Park a few weeks ago, didn’t we?

Unlike ours, their naughty van didn’t give them any previous warning of trouble. Otherwise they could have had it fixed before they left! Ours was making horrible whining noises after we got back from the Great Cross-Continental Trek of 2013 so we knew not to trust it until we could find a way to get it repaired. At least Thom had already researched the right place for them to take it! They did a fabulous job and ours runs great now. Hopefully theirs will be fixed just as well very soon. Poor darlings! This is going to be one expensive aborted vacation for them.

On a happier note, I finally have photos of my completed Rainbow Dark Cardi that I’ve been teasing you with for the last several posts: 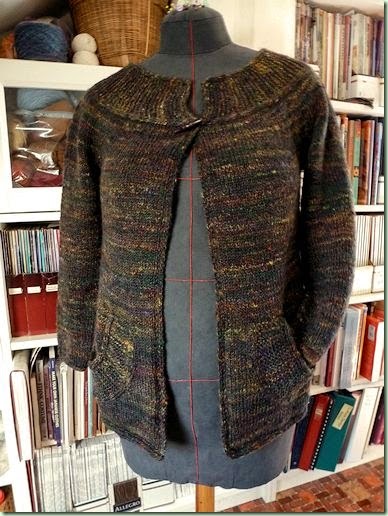 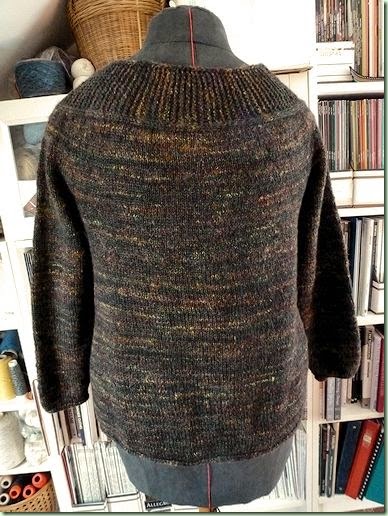 Yes, Debbie Double is wearing it. She wears all my clothes. Although it’s finally cool enough around here so that I wouldn’t melt into a puddle if I put wool on my body, it just is so much easier to take a photo by myself. Debbie is mostly my shape so you can see how well it fits. Yes, I know she doesn’t have arms. Don’t remind her. She feels kind of sensitive about what she thinks are her deficiencies. Heh.

Here’s the toggle button that Thom made for me. The delay was caused by some difficulty getting the holes drilled:

They’re a little wonky but it works just fine and I’m very happy with it. I’ve already given you all the scoop on this sweater in various posts so I won’t go into the details again. If you need more you can click on this Ravelry link. From there you’ll find a link to the spinning deets as well.

So. What’s next? I finished one pair of shortie socks. And there’s enough yarn left for a second pair! Yay. 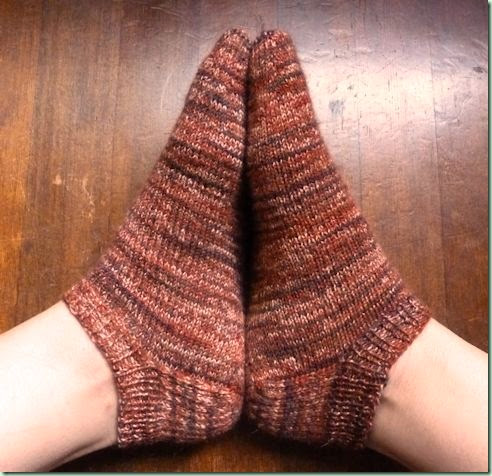 Comments: I think I’ve got this pattern much better now that I’ve done it a few times. It’s the first toe-up pattern that I’ve liked since I need the proper heel flap to fit me and I quite like the shape of the gusset under the heel. They do look kind of odd without feet in them but are very anatomical on.

On to the second pair – which I’ll probably overdye to shift the colours. I’ve already cast on and am working up the toes.

In other news, I’ve finished weaving Difficult Waffle Weave Towel #2. Less breakage but still several more than I would prefer. (Actually I would prefer none at all, but that’s obviously asking too much.) I changed the dowel system I rigged up to weight the blue jeans/hemp warp threads to S-hooks which is working much better. I found I need to keep the air humid (my big swamp cooler helps) and painted on more snot…er, flaxseed dressing. Even spritzing the warp with water if I thought it was getting too dry in the studio. Otherwise several threads at a time popped especially if I hit them too hard with the shuttle. Argh. This beast is never-ending. I’m sticking with it. Even though I’d rather be sewing now that my studio is cooler and my sewing machine not so likely to be affected by high temps. At least the microwave is working now which is also affected when the temp gets too high. Yeah. Weird. Life seems to be like that right now.

It’s supposed to rain some tomorrow. Should save me my daily watering job anyhow. Also hoping to hit the farmer’s market for apricots and nectarines. And herbed fromage frais. Yum.