Closer Than It Appears

Obviously I’m taking advantage of my cable Internet connection while I have it available! Only 3 more sleeps now. We’re busy trying to eat up the perishable food left in the fridge. Salads! Oh, how I love you. Mostly produce from my garden too. I put a second batch of tomatoes in the dehydrator to process so I don’t lose my entire harvest while I’m gone. If I freeze them I won’t use them. Dehydrating works best for us so that’s what we do. We’ve owned this dehydrator since the 1980’s and it still works just fine! Sometimes it’s good to hang onto things you will use. They aren’t particularly easy to come by anyway and they’ve kept their price just as high.

A lot of stuff is now packed and ready to go. Sadly we can’t load up the Westie until the day of departure. Otherwise we risk break-ins. A very high risk it is too! So we just wait to load until the last minute. Better to be safe than sorry, huh? At least this time we don’t need quite as much as we brought last year for our Cross-Country Trek. This trip is shorter by nearly half and mostly in the desert or near enough to desert to be virtually indistinguishable. We don’t have air conditioning so ice will be very important to us. At least it’s available at nearly every gas station! Potable water is harder to come by including showers sadly. Making do is the name of the game. We need lightweight clothes that don’t restrict, don’t wrinkle too much, are breathable and don’t hold perspiration smells. When it’s super-hot and very dry, basic survival becomes very important! Forget all your city slicker ways. Queue the theme from Deliverance….not.

Just to cover all the bases we are expecting some colder temperatures as well as possible rain. You just never know! That means packing for quite a large range of weather possibilities but that’s actually kind of normal for us. Woolies and shorts. Check. Umbrellas and sandals. Check too. Ready for ya! No. That’s not a challenge. Urp. (Careful, damselfly. No point in tempting fate, huh?)

Not much more to do in the next 2 days apart from tidying the house and watering the garden. Laundry tomorrow. And possibly one more load at the last minute on Tuesday night. Does anyone else have so much to finish up before going away for awhile? I don’t recall reading about anyone’s pre-escape preparations. Or maybe they just don’t blog them? I know there are a lot of people who leave home for months or even more. They escape winter to Mexico or Arizona or Florida. Or they head for Europe or South America or Australia. One of my friends spends half the year in her home country of New Zealand and the other half here in the Vancouver Lower Mainland. Another spends most of her time in England and her original home near Victoria is now a vacation spot. How does everyone else do this? I find it difficult and rather stressful getting everything ready to go. Or is that just me? Yes, I’m still in Packing Mode. Obviously. At least until we’re in the car and at least a kilometre from home. Only then do I start to relax. Start. Umm…relax.

My late and very dear friend Masami used to say that I have very deep roots. So true.

Meanwhile I finished a sweater: 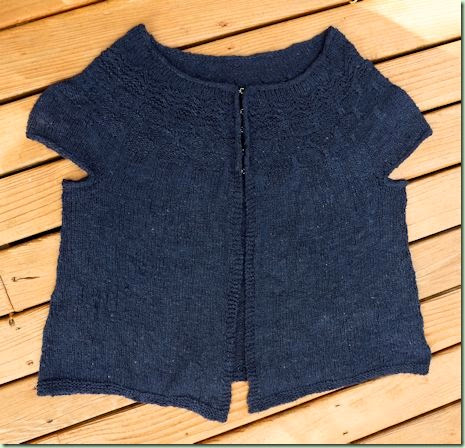 Mods:  My gauge was a little looser even with one size smaller needles so knit the 91cm (36”) size which ended up about a 40” bust size. Followed pattern but worked one more set of increases on the body to get enough length. Didn’t put the sleeve stitches on hold before working the i-cord bind-off. I just kept going all the way around the cuff again to the centre under the arm (picking up a stitch or two in the corner gaps) and knit-cast-on 3 sts on the left needle to start the i-cord.

I was at a loss as to how to fasten this cardigan. None of the buttons in my stash really looked right. The original had you use hooks and eyes and I just happened to have some really big ones in my stash. Just perfect for this project I’m thinking! I used only 5 since they were larger than usual plus they took ages to sew in properly. I used regular sewing thread that matched very well. 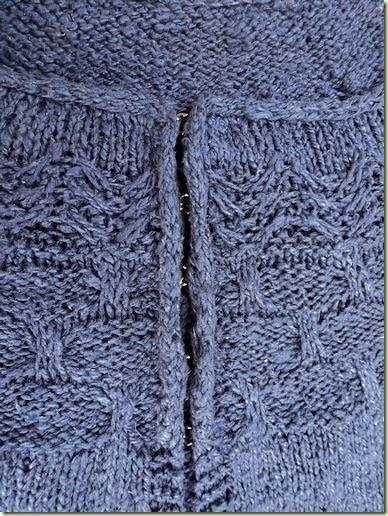 Big Black Hooks instead of buttons. This photo is quite light compared to the real thing. But at least you can see the details.

Comments:  I quite like this sweater and was sad that the designer, Kamicha, decided to discontinue her free pattern on Ravelry. Some of the original pattern symbols were not familiar so I re-charted the yoke using Knit Visualizer making them more understandable which worked well. I knit the original short puff-sleeve version but it would be nice in the longer sleeved version also.

The navy noil silk yarn guarantees that it will coordinate with my previous Buonasera Tunic in the same yarn. I predict that the duo will see a lot of wear this fall and winter. Yes, it looks a lot cuter on than the flat photo would suggest. Sorry about the lack of human modelling. 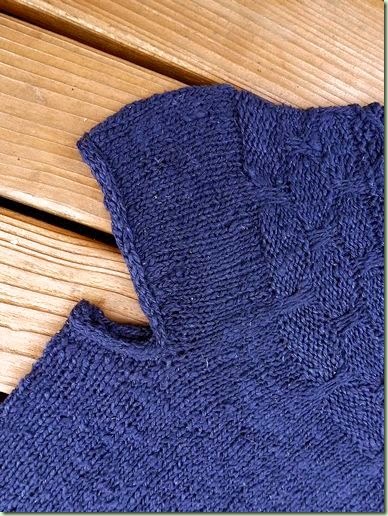 BTW the name ophicleide (pronounce OFFa-clyde) refers to an antique brass instrument which replaced the even more antique serpent. In turn it was the forerunner of the more modern tuba and euphonium. I love old instruments. Very cool bass sounds!

So I’ve backed up my computers, packed digital books as well as paper ones, have my knitting patterns in both formats (paper and electronic), filled a tote bag with necessary gadgets to keep everything running and cross my fingers that I haven’t forgotten anything important. Getting closer.

More whenever. Or soon. Who knows?

Keep watch for snakes in desert areas looking for a warm spot to sleep as it gets cooler at night.

Thanks for looking out for us, Lynne! We're plenty aware of the wildlife. I know to check my boots for scorpions before putting them on too. Even though it's not likely to climb into the Westie, one never knows!