Well, where the heck did I leave off? Oh yeah, on Day 4 we were on our way to Farewell Bend State Park, just on the border of Oregon and Idaho. That night we had a little bit of a storm with thunder and some rain. Just enough to cool things down some. The next morning it was into Idaho, state #3 for us this trip, as we headed for Craters of the Moon in the eastern part of the state for Day 5. This place is amazing! Lava flows and craters everywhere you look. This kind is called pa-hoe-hoe (ropey lava): 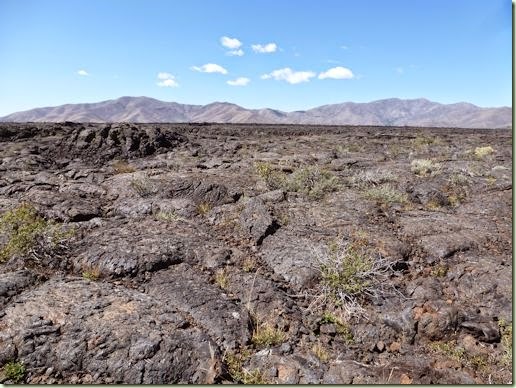 The even more broken up and pointy stuff is called a’a (meaning “ouch-ouch”). Yes, they get the terms from Hawaiian because that’s where this volcano stuff has been really well studied. Our campsite is in the middle of it: 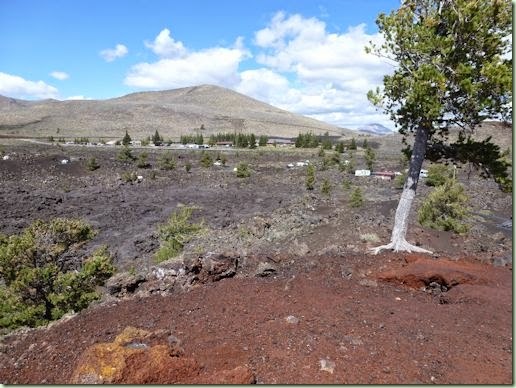 Oh, sorry. Guess you can’t see our little Westie too well there. Here, try this: 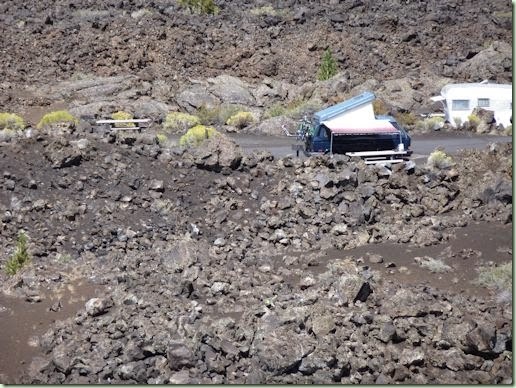 There she is! Tucked in a little spot among the lava. It wasn’t quite as hot as it looked because there was a cooler breeze blowing that made it quite bearable. So we went for a walk along the North Rim Trail. It was really interesting to follow a series of craters. Some we got to walk down into: 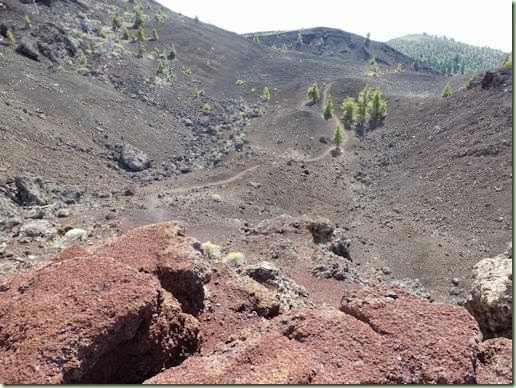 And some we skirted the rim: 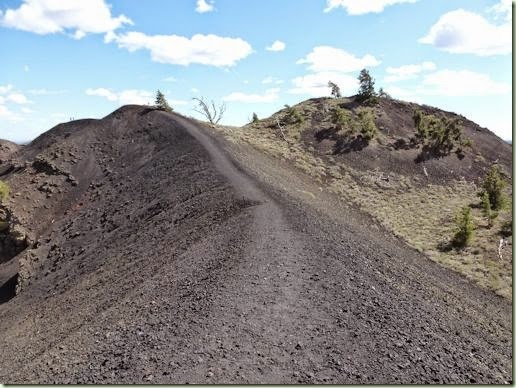 We didn’t really want to walk back up and down along the same trail so we went back by the road – a total round trip of nearly 10K. Whew.

Next day, Day 6, and still in Craters, we drove around the loop to the lava tubes trail. We did 3 of them. This one is the biggest, Indian Tunnel: 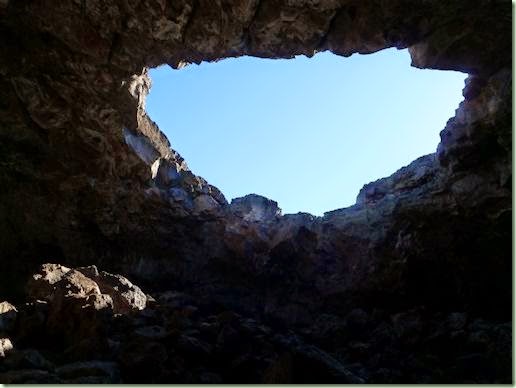 It’s relatively easy because most of it has openings that let in the light. The end is a bit of a scramble and a squeeze though: 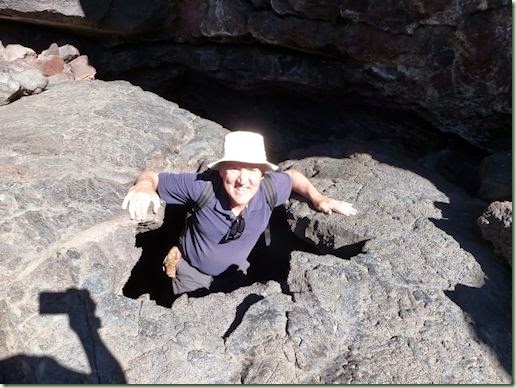 And then you get to walk back over the pa-hoe-hoe directed by markers. But that was not nearly the squeezes it took to get into Boy Scout Tunnel! That was a tight one and I was really proud of myself for not being at all afraid to climb into such a small entry. I enjoyed seeing the bits of ice left inside that one. We also did the larger Beauty Tunnel, which is only open partway due to a rock fall. It has some pretty sparklies on the ceiling which I guess must give it its name.

After that we drove out to the Tree Molds trail. Yes, another set of trees that had gotten themselves swamped by the lava flow and left their impressions in the rock: 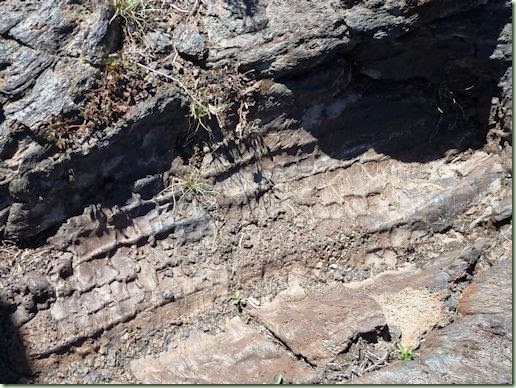 This stuff is fascinating – at least to us! 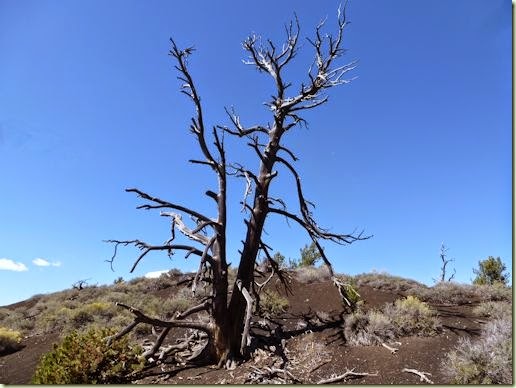 We enjoyed our stay at Craters but on Day 7 it was off to state #4, Utah. We got groceries on the way to Antelope Island State Park in Great Salt Lake. Here’s the view from our campsite out over the salt pan to the super-salty water and the misty island and mountains beyond: 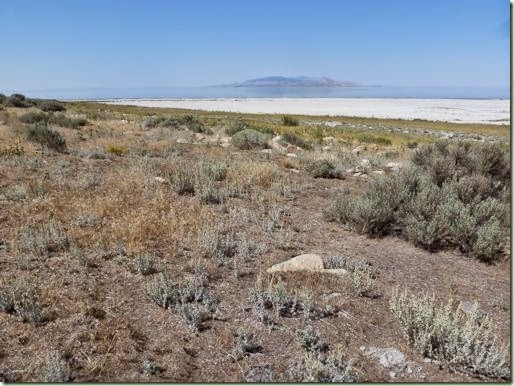 It looks rather desolate there but it had the most wildlife we’ve seen yet: bison, pronghorns, deer, jackrabbits, birds (chukars, meadowlarks, pelican, gulls, sandpipers) and the life of the lake itself, brine shrimp and clouds of brine flies. 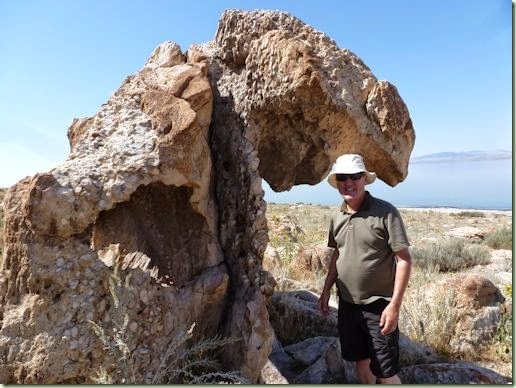 This is my buddy, the Gargoyle Rock. No, it didn’t eat Thom. But it was a very interesting shape! On Day 8 I waded in the lake and got all salty! It’s 3 times the salt of our ocean beaches. It also smells rather unpleasant and is kind of gross but that didn’t stop several people from floating in it. I wasn’t inspired to go that far though! We weren’t able to drive down to the Garr Ranch at the end of the island because of a bicycle race so we contented ourselves with hiking up Buffalo Point lookout instead: 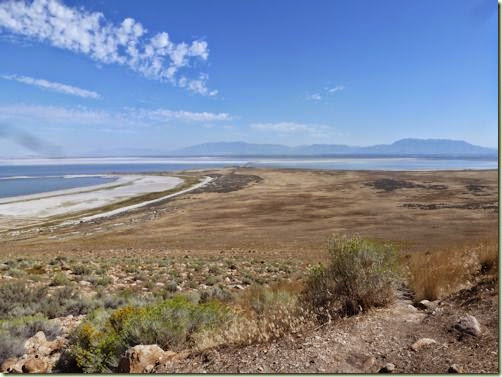 You may be able to just see the long causeway which is how you get onto the island towards the top centre of the photo. We had trouble sleeping that night because of the strong winds which blew the canvas on our van noisily. Thom got up and shifted all the stuff from the top level and closed the pop-top up so we could sleep. But on Day 9 we were up earlier than the sun so we could get an early start through the Salt Lake City and Provo morning traffic. We took full advantage of the HOV lane and buzzed through the busy corridor as quickly as we could and then headed down quieter highways to Capitol Reef National Park.

I’ll leave this post here because it’s getting rather long. Saga to be continued on the next post!