Hang on. My Wayback Machine isn’t done yet.

Day 25 found us waking up early again – partly habit and partly because we were freezing! Kind of a shock to be where you can see your breath in the morning after Valley of Fire and Death Valley. We obviously didn’t pull out enough warm blankets because it wasn’t all that cold when we went to bed.

After breakfast we were tootling along the Tioga Pass Road and winding up-up-up into Yosemite National Park. It’s a steep and spectacular view but we didn’t stop to take photos. It was enough just to get up there! The pass itself is nearly 10,000 feet high. Continuing on through the East Gate we passed many subalpine meadows and granite outcroppings. We stopped for the view at Olmstead Point and we could see the famous Half Dome in the distance: 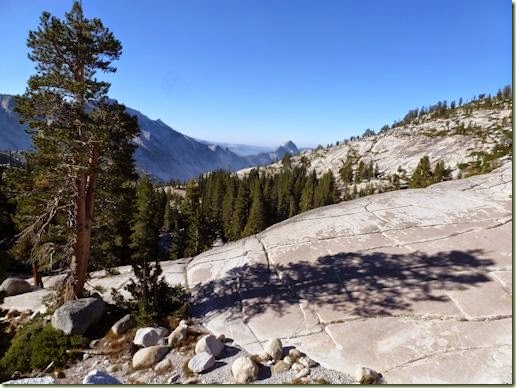 But the valleys were really smoky and our views were somewhat obscured from here on down. We continued on down into Yosemite Valley through the 3 tunnels and stopped on the loop road for a view of the massive El Capitan, the largest chunk of granite around. Isn’t it handsome? 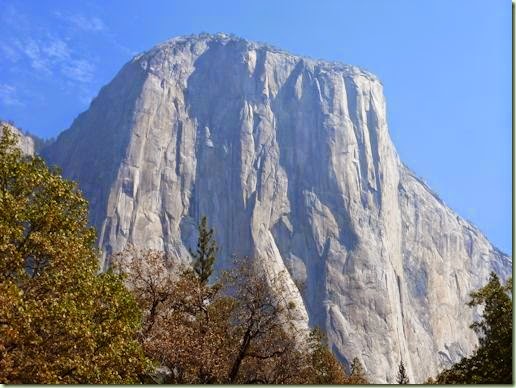 Then there’s the view up from the front of the Visitors Center: 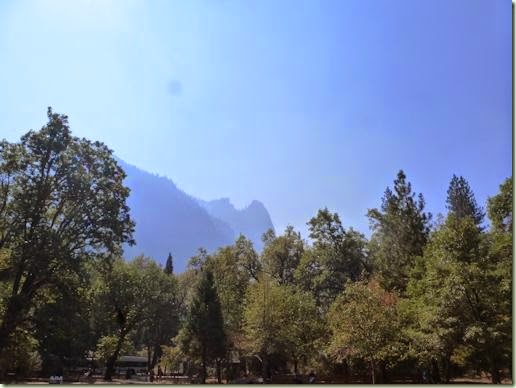 You can see how smoky it is! (Don’t count that stupid piece of sand or whatever in my lens.) Apparently the closest fire, the Meadow Fire north of the valley has finally been contained but it was pretty major. And there’s another fire, the June Fire to the southeast. When we left the village and climbed up again to the Tioga Road heading west, this was what we could see of the valley behind us: 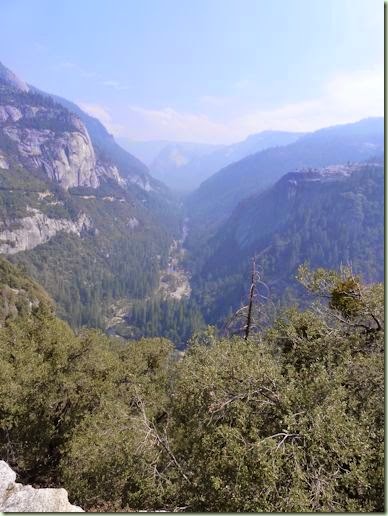 We didn’t go that far from the West Gate out of the park. The choice for the evening however was not a good one, a private RV campground called Yosemite Lakes. They are really pricey (like 2-4 times what we’re used to paying) and not even as nice as some of the state or national parks. Bleh. Now I know why I usually stick to those. The promised wifi is frankly useless crap. Not recommended by Damselfly, that’s for sure! But any place in a storm, as they say. Half an hour of thunder, lightning and rain count as a storm, don’t they? I thought so. At least we have power and the showers here are complementary and hot. (You have NO IDEA how important that can be out in the bush.) Although I can’t really get my bandages wet so I had kind of a hair wash/washcloth affair that didn’t get me right into the shower stall. We do what we can under the circumstances, right? Right.

Next it’s on to nearly the coast, straight across from Yosemite toward San Francisco, up through Berkeley and over the toll bridge into San Rafael. Shopping at Dharma Trading. (I have a list! And am open to serendipity too.) Some much-needed groceries. And then Samuel P. Taylor State Park. Hope they have a place for us because we can’t get reservations.