From Deep In The Studio

If you happened to get Part 8 of the Odyssey in your feed reader again, sorry about that. I suddenly realised that the rats gave me the wrong photo and I uploaded the correct one instead. Ah, Blogger. How I love/hate thee.

Meanwhile I’ve been sewing. Yes! Truly. Madly. Deeply. (Oh, I loved that movie. But I digress.) I have a Finished Object for you, the Indigo Batik Vest or Top, depending on whether you layer or not. The pattern is Butterick 5891 and Katherine Tilton herself considers it a vest and that’s probably the way I’ll wear it most often. 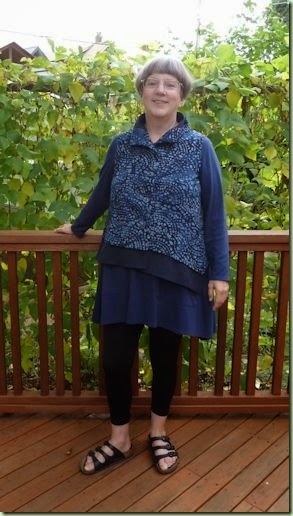 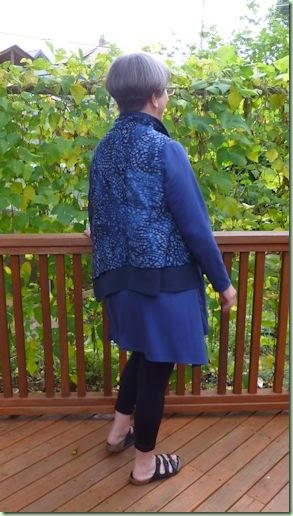 Look! Real photos of me! (Poor Debbie Double is sulking in the corner.) Yes, Thom and I had a bit of an argument discussion about our photo shoot. Oddly enough, he can’t see in my head what I want and I can’t see what he sees in the viewer. Plus I have a hard time posing naturally without thinking how fake/dorky/stupid I look. We’re working on it.

Ahem. The fabric is an Indonesian batik quilting fabric from Dressew. Who knows what dyes they actually used but probably not real indigo. But real hand-dyed anyway. Ask me how I can tell. This was left over from the lining to my original Minoru jacket of a couple of years ago. The inner collar and peplum/flounce thingy are part of an ancient tablecloth that was gifted to me by Thom’s very elderly Auntie (still kicking at the moment). She used to sew herself and also manage a garment-making facility in Los Angeles back in the day. Who knows were she got this piece from originally? A restaurant probably.

I cut this out way back in August and although I can’t remember exactly, I’m sure I did a little Fitting Magic because it’s pretty much perfect. The cotton batik is quite stiff and the tablecloth fabric is thicker but more drapey. I didn’t do the little tuck things on the peplum because they just didn’t look right on this piece. I doubled the inner collar but didn’t quite sew it in the most sensible way. It’s quite wearable though I would have liked the navy fabric to show instead of the front facings. I bought the pattern in digital form and it had some issues. I have no idea if the print version is the same or not or if there was an updated version at some point. There were several mistakes/omissions in the instructions (kind of par for the course actually and not usually a problem for me) and the front facings were drafted an inch longer than they needed to be: 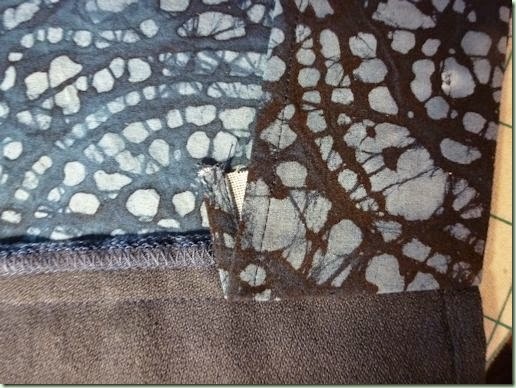 I just trimmed the excess off before hand-stitching the ends down. It would have been difficult to finish the inside nicely without a serger even though nothing was said about it in the pattern instructions. I consider my Pfaff Coverstyle an indispensible piece of equipment in my studio, not just for knits but for nearly everything I sew.

This garment was an asymmetrical PITA to sew with nearly every piece being a one-off. You can’t see it in the photos but there’s a pocket on the left side which pleases me because I love pockets. It would have been too big for its placement on the vest and would have stuck out if I hadn’t serged the edges off and tacked it down so it didn’t shift around. I know there were a few who complained about that in the reviews. The collar pleases me too though it’s a little bit high when the top button is done up. I’m glad I doubled the undercollar which gives it enough body to stand up nicely even if that’s probably why it’s a bit high under the chin. Or maybe my neck isn’t long enough. Heh. I’m quite happy with my vest/top though it’s a bit tricky to style because it’s quite short in the front as well as closely-fitting on the top but quickly widening to quite loose-fitting at the hem.

It really makes me cranky when I find expensive commercial patterns from a long-established company like McCalls/Vogue/Butterick et al with so many errors in them. They are not proof-reading and double-checking carefully enough. Yeah, I know they only have so much space to be clear in but…come on. The left/right buttonhole/button thing is just unforgiveable – if easily enough overlooked by the experienced sewer. I can’t lay much of the blame at Katherine’s door because she has only just so much control after she submits the pattern. You know what you meant to say so it’s difficult to impossible to edit your own work. Or an editor misinterprets and adds the error themselves. I’ve had it happen to me (don’t ask). Mostly it’s not a problem unless you have a total newbie who is following word-for-word or it’s a very complex sewing sequence, as this one is. I’m definitely not a newbie and, although I did read through before beginning, I still followed pretty much step-by-step. As I went I made notes where I differed from the instructions or where it could have been done better in a different order. I’ll be ready for next time anyhow. If there is one. 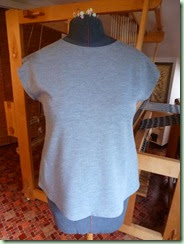 Right on the heels of this make I jumped into a refashion. I think it was last summer (?) that I made this grey ponte knit T-shirt from Maria Denmark’s Kirsten Kimono Tee pattern (the one you can get free if you subscribe to her newsletter). I’ve made several versions of this t-shirt, all of which I wear often except this one. It’s a little too stiff or something is just off. Anyway, I decided to refashion it into a tunic/dress thing using scraps from other projects. But so far it’s nothing like my I originally imagined! It just kind of took off on me. I’m not sure if I like it or it’s just to weird/twee/something. I’m not at all finished yet but I mocked it up on Debbie: 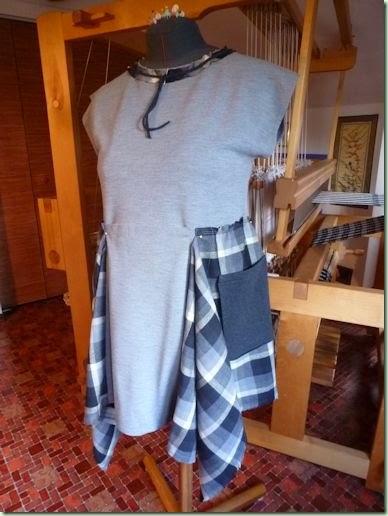 The pieces are just pinned together so far. Any opinions one way or the other? Give it up or go for it? Looking at the photo, I’m leaning towards finishing it up and then seeing whether I actually get any wear out of it when I’m done.

No chance of running out of things to do in the studio. I still have at least 3 more garments that were cut out quite awhile back to sew. And I’ve started on another refashion – or perhaps repair would be a better word for it. The top I blogged in this post isn’t getting worn because the hem pulls in unattractively. I’m going to add another piece to the bottom band to try to loosen it up. It should be a little gathered like the inspiration piece rather than pegged. I only have a few tiny remnants of that charcoal cotton/lycra knit left though so hopefully I can scrounge enough to piece it together. Oh, and there’s still that warp on the loom. It’ll either work out or become a wadder. But I won’t know until I finish it, will I?

Hey Louisa,
Love your pix wearing your new vest. I know, I know, it never goes well when my true love "tries" to take photos of me wearing what I've made.
I have that pattern, but haven't made it yet. Heard it was difficult. Seems many of the Tilton ones have faulty directions. Do you check out their sites to see if they've added corrections or ideas? The Tiltons, I mean. Anyway, the combination of fabrics look cool. And the rehabbed piece in progress. I liked what you have pinned together. Try it and see how you do with it. It can always be refashioned again if it doesn't work for you, right? I do that often. If it's been refashioned once, it'll probably come around again a year or more later...

Oh thank you for your encouragement, Pat! You are the Queen of Refashioning and I bow to your wisdom. I shall definitely finish it now and the true test will be in the wearing, right? After all it didn't cost me anything except some fun playtime.

Love your new vest! The fabric combination is pretty, and I love the way you styled it for your photos. Sorry you found so many problems with the pattern directions. I've made the jacket/shirt in the same pattern, and I don't recall any difficulties.
I hear you about having your DH do your photography. I'm so frustrated about it, I haven't had him take any shots for a few months. I'm that far behind in posting. But a tripod and a remote are winging their way to me as I write this, so I'm hoping my photo woes will soon be over.
I'm curious to see the refashioned top on your body instead of the dress form. I'd like to see how - and where - the draped parts hang. That's my 2 cents worth! I like what you did at the neckline. I say go ahead and move foward with the remake, as it's only costing you playtime.

Thanks for your comments too, Dixie. I have a tripod but my camera needs to be set up for each shot, no remote. Such a pain to run back and try to pose again.

Debbie Double is exactly my shape and height (apart from the fact that I have legs and arms and a head!) so I'm not sure how much different the tunic/dress would look on me.I'll try to get a proper shot when I'm done though. Just for you. ;)

I think your vest looks great - and you look very artsy/classy/cool in it. I admire your fortitude in re-fashioning - it's one area I lack patience in.

Thank you for the kind words, Heather. I too have little patience for re-fashioning! I'm trying to learn it though.