I haven’t got a properly modeled photo of my latest FO (again!) so you’re going to have to forgive me for the usual murky shots on Debbie Double. This is the T-Flare Dress, like a simple long-sleeved T-shirt that skims and then flares out into a wider skirt: 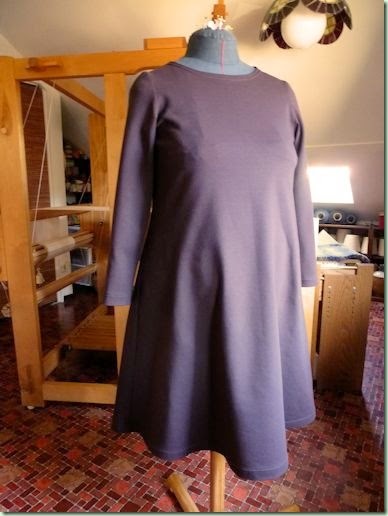 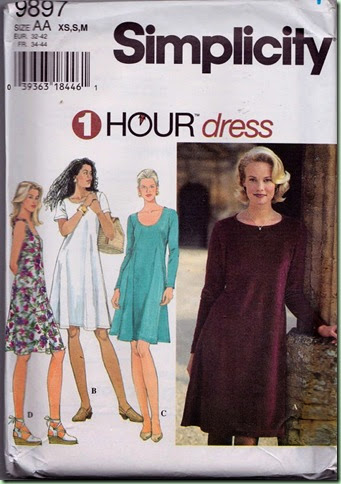 Although I’ve made this up as-is in the distant past, I adjusted the size sm quite a lot for much better fit in the bust and abdomen. The shoulders were still a little loose at the back armscye and the cap had too much ease. (Why do stretch patterns have sleeve cap ease? They don’t need it!) I managed to take it in a little but I’ve made notes for next time. Anyway I do like how the two-piece back fits smoothly over my rounded back: 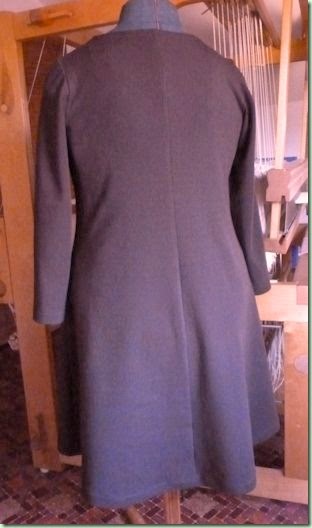 The fabric is a beefy rayon/lycra ponte in a deep reddish-brown that I call cherry-brown which my camera can’t capture apparently. I’m hoping this will be a useful layering piece that should work well in three seasons.

There’s also a pair of my TNT pants and a cap-sleeved T-shirt still to sew from this fabric. But I’m distracting myself with cutting apart the pieces for the Sandra Betzina V1411 pants. The entire shape is quite different from my TNT stretch pants so I guess I’m going to have to make a test pair. Sigh. Why do I do this to myself? Make so much more work! Not to mention waste fabric on a test. Yeah, I know it’s not really a waste to get the fit just right but I’m not usually a muslin-maker. I prefer wearable muslins, aka an actual garment. My other alternative is just to go ahead and whack out the TNT instead (if it will fit on the fabric along with Thom’s sweater) and skip the cute stitching lines of the Betzina pants. Or perhaps try to recreate them on my TNT? Dunno. I think I’m going to have to give this some further thought.

Meanwhile, Thom’s Finlayson Sweater pattern is all ready to use. He’s a pretty normal size medium and the only fit change needed was to shorten the sleeve a whopping 1-3/4”. Either this is drafted for someone with orangutan arms or Thom has tiny T.rex arms like me! Although his other similar purchased sweaters fit fine so I doubt it’s the latter. No problem. Easy-peasy fix. Done. Once I figure out what I’m going to do about the pants pattern then I can see whether or not it all fits on my 3 yds of gray ponte. We shall see.

What else? Haven’t touched a weaving shuttle so the placemats are stalled. Knitting on the Silken Haruni is going along but rather slowly. However I’ve memorised the main leaf pattern so I can knit on it while watching TV. It’s pretty simple until you get to the fancy border chart. Haruni is the only knitting project I’ve currently got going because I finished the Glasses Sock Plain Version: 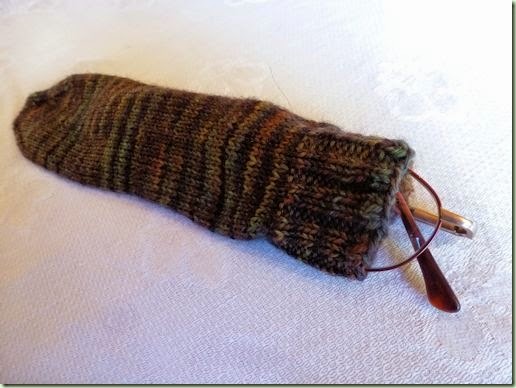 This one is 4 stitches wider than the first at 36 around and just plain stockinette in the last of the Ancient Arts Fibre Crafts sock yarn, colourway “Frolic”. This one finally meets with Thom’s thumbs-up approval. So much for fancy patterns, eh? I put a plastic bead tube in the poor rejected sock and stored my Knitter’s Pride Cubics sock needles in it. So there. Anyway now I need to start a new pair of socks, don’t I?

The weather remains clear and chilly though that will change soon, don’t you just know it. While it’s been nice we’ve been kept busy clearing the fallen leaves. The walnut tree is always late but loses them quickly once it gets started. I have to sweep the deck and the front stairs nearly every day. Walnut has to go in the city’s leaf pick-up because it’s not good in our compost. We have enough other stuff to put in there though and right now it’s really full. There’s more to come so hopefully the bottom layers are starting to break down to make some room.

Always something exciting going on to keep me occupied. More soon!