It still hasn’t lost it’s glow for me – I can make things again! Wha-hoo! You can easily infer from that reaction the extreme level of frustration I was feeling since The Incident happened two long months ago. Back in the saddle studio now and trying hard not to obsess crazily or flit about aimlessly. Slow and steady, damselfly! Don’t push things too hard. Yet.

I’m slowly knitting on the Blodgie Sweater (aka hot water bottle cosy) for Nana (aka Thom’s mom). I made a major mistake and had to rip back 2/3s of what I’d already done. Boo. But I’m back up past that now and about halfway to the finish line. The cables are kind of complex but fun and they take some concentration though it will go much faster when I get to the turtleneck ribbing which I can practically do in my sleep. Sadly I won’t be finished by New Year’s Day but she will get this gift next week instead. No hurry really except that it’s been a bit chilly around here lately so a blodgie would be welcome to warm up the foot of her bed, I’m sure. Mine sure has made itself indispensible! Photos to come soon.

My other current project is The Sweater For Thom which is of course still at the teasing-wool stage. Lots and lots of wool to tease! Unlike most other spinners I really love that job. It’s mindless and soothing and I can listen to podcasts without dividing my attention. Recently I’ve been listening to a new one I just found: Woolful. It’s very interesting with an interview format, two per episode, with various fibre folk whom you might not have heard of especially if you don’t hang out on Instagram. (That would be me actually since I don’t have a smart phone!) The conversations are thoughtful and articulate and totally remind me of a lot of the back-to-the-land people I knew back in the 1970’s – a combination of the desire to DIY as much as possible, concern for environmental sustainability, and an acute awareness of their wider community. I do love me some youthful energy and enthusiasm. You go, people.

Meanwhile, woolly pleasures abound. So let me show you more about the process from fleece to yarn. To reiterate, this wool is a RomneyX from New Zealand that was gifted to me ages ago. As in decades. All I did since then was wash it in very hot water and Orvus. The fleece is coloured an extremely light gray, some almost white but with a few patches of darker colour. I’ve been systematically sorting out the much darker bits and the wool that is left when blended all together is a very pale warm grayish, not quite creamy tan but not quite gray either. I’m sure there’s a very chic name for it in paint chips. Sand? Barley? Elephant’s Ear? Dolphin Fin? I need to take the swatch into Home Depot and use their matching machine (spectrometer)! Or download the app. I want a cool name to call it by. Ahem.

This RomneyX fleece is quite long-stapled even for a Romney: 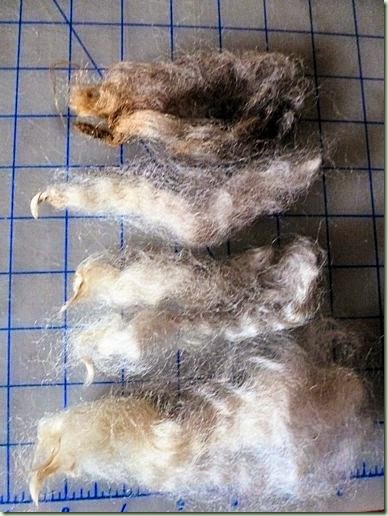 I really wonder what it was crossed with? You can see that some of the locks are nearly 8” long! This photo shows a good range of the colours too and a good idea of the wide loose crimp. You might be able to tell that this fleece has some brittle tips which I’ve been pulling off as I tease each lock: 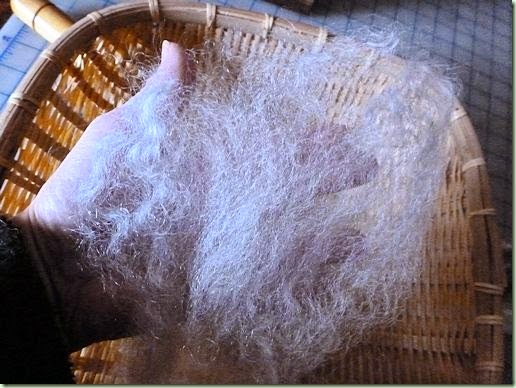 Isn’t it pretty? This leaves me with a lot of debris so I’m teasing over a lap cloth and a flat basket to collect the fallout. I have a huge big deep basket-full of fluffy fleece now!

Next step after teasing is to run the teased fleece through my drum carder. For this relatively strong fleece I’m using my very old Patrick Green that I’ve had since the 1970’s. It has wide coarse teeth that work very well with the long-staple medium to coarse fleeces, especially Romneys which I’ve actually been working with since I learned how to spin way back then. I’ve heard that anything over 4” is too long for a drum carder but that’s just hooey. Does a fine job. Just don’t try to card too much at once and stop before it’s packed too high. 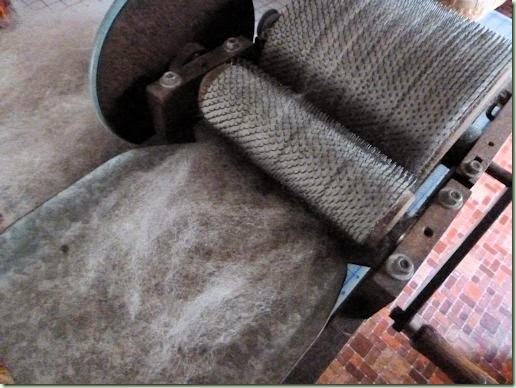 The results after two passes are pretty good. Occasionally I miss a piece of of the brittle tips which show up when I hold the batt up to the window: 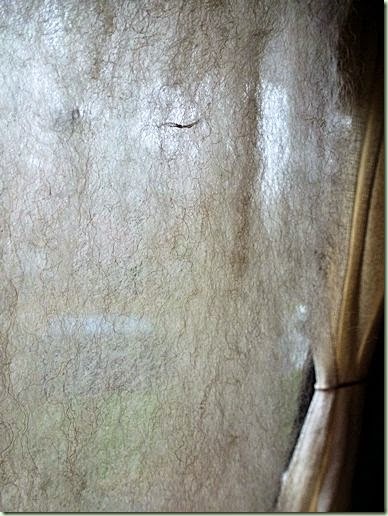 Not hard to remove them at this stage. If I left them in they’d just add unwanted lumps in my yarn. The zigzag-stripped batts look pretty nice: 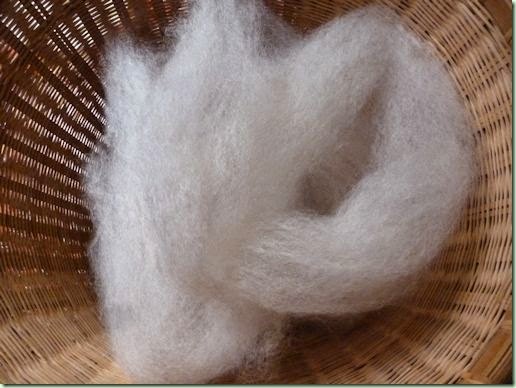 All ready to spin. When I get about a kilo ready to go I hope I can remember how I did my best sample, that was Sample #4 – long-fibre, long-draw. Whew! It’s a new technique for me. Guess I’ll get lots of practice in though before there’s enough ready to start knitting the sweater. I need about 1300 yards total for a medium man’s long-sleeved sweater. I’m not even sure which pattern I’m going to use for it yet.

Hand update. Just in case you’re not sick of the whole stinkin’ issue, poor old Righty is looking pretty healthy these days. The skin is peeling where the infection was. I’m still slathering on my aloe, vitE and lavender whenever I think about it. It’s healing well but I’m still getting the occasional pin-pricking or light nerve zapping. It’s a LOT better than it was though so I’m expecting it’s going to go away eventually. I can use it almost as well as normal now anyhow so I’m generally very pleased. It’s been a very long haul. One I don’t really want to drag into next year with me. Still a few antibiotic tablets to go though.

We are priveleged to have the Biggest Grandbeasties tomorrow overnight. Rumour has it that they really want to stay up until midnight for New Year’s and honour the local tradition to bang on pots and pans and shout out with the neighbours. From here you can hear the boats in the harbour too which is my favourite part of it all. Since they’re only 10 and just-turned-8 that will be a challenge! Or maybe that would be their grandparents having a hard time keeping their eyes open. We shall see who quits first! The gauntlet is thrown down. Heh.

Here’s wishing all my Dear Readers a very happy, healthy and productive New Year! Big hugs to you all. On to 2015!

Sounds like a good project for the New Year. I always enjoyed spinning RomneyX. I think Shetland is my fav - I spun it right off the fleece while still greasy with only one cold water soak for dirt. Didn't even bother to tease it. Just spun it fine & then washed it lightly. I love the feel & smell of fleece, sigh. Time to spin some myself. Have a good time banging pots with the Grandbeasties!!!