We’re in the middle of January and I don’t have much to show for it, except this: 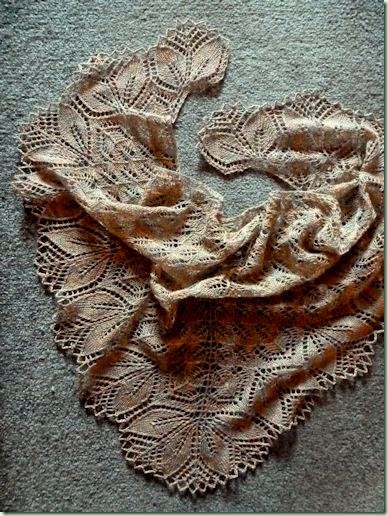 Pardon the “mood lighting”! As I said, it’s January. Anyhow, this is my Silken Haruni Shawlette. Haruni (“grandmother” in Elvish) is a free pattern by Emily Ross and Ravelry’s knitters have recorded nearly 9,500 of them! As always, I’m a day late and a dollar short but I finally got this one off the needles. I started it lo, those many months ago in September while we were away on our desert holiday. The yarn is silk (yes, I did a burn test to prove it!) from my deep weaving stash and the muted colours totally remind me of the Southwest rocks, sand and sage. The only mods I made were to go down to a 2.75mm needle for the very fine silk and knit the first chart to 14 leaf stems instead of the recommended 12. I also used a crochet hook and doubled yarn for the bind-off which took me about 2 hours to accomplish. The shawlette blocked out nicely (I mostly used pins and only used wires on part of the top edge) and is quite a reasonable size to wear as a spring or cool little summer shawlette or scarf, which is the way I usually wear these things. Check out the pretty 4-leaf tip: 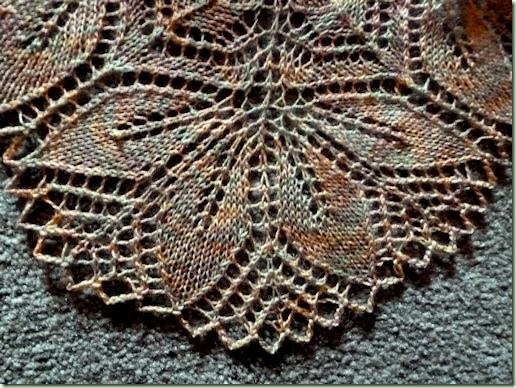 I’m particularly fond of leaf patterns! One thing I have to say about the pattern is that it is much too detailed, at least for a knitter of my experience. It even includes written instructions for those who are chart-impaired which is unusual – though I can’t imagine preferring many pages of line-by-line instructions to a few symbols. (I’ve been known to chart a pattern myself if a chart doesn’t already exist!) I personally would prefer to have more detailed charts instead since I had to refer too often to the wordy bits to find out how to interpret these ones. YMMV as they say. Obviously enough knitters have managed to follow the 14 pages of instructions successfully!

I have 2 versions of this pattern and there are actually 6 revisions in total. The final one has you bind-off using knitting needles which I attempted at first but found really awkward and confusing. So I went back to version 1 and followed its advice to use a crochet hook. So much easier! The technique I used is more common for lace doilies and uses the hook to “knit” a group of stitches together and then to chain off a loop before the next group. Doubling the yarn makes these loops a little more substantial. You can see how nice this looks in the detail photo above. I wonder why the designer chose to eliminate the crochet hook version in her last revision? Are knitters somehow afraid of The Hook? It’s only another yarn tool. Gee.

So now that I have an FO, of course I get to start a new project. Yay! Last night I just began a Little Black Cardi using the Trellis pattern from Lili Comme Tout (aka Julie Partie). The yarn is those infamous 6 puff-balls of Elann F05 sock yarn that I dyed semi-solid black. So far it’s going well after casting on 283 stitches, which I did right first try! Whoot! I’m going with a straight size L since that fits my measurements except that I’ve refigured the sleeves which are 3” too long for me. Hopefully the shoulders won’t be too wide. There are quite a few nice fitting instructions in this pattern including at bit of waist shaping, a wider front at the bust area and short-rows at the back neck. Also it’s all one piece from bottom up and then the inset sleeves are picked up and knitted down. Very nice.

I’m beginning to avoid pieced instructions when I choose my patterns. Not that I don’t like seaming but why bother when I have had good experiences with one-piece construction? I haven’t been convinced by any of the arguments for knitting a sweater in pieces. I’ve done them every which way over the years so I think I’ve given each method fair due. The only reasons I would knit a completely pieced garment is if it was very large and I couldn’t manage the weight of the whole thing at once or if it had unusual construction such as pieces knit at different angles. Otherwise, either top-down or bottom-up works for me.

Interestingly, pieced construction harks back to garment sewing where you have a flat length of fabric off a loom and need to shape it to a decidedly not-flat body. (Ignore the fact of machine-knitted yardage for the moment. I’m trying to just focus on hand-knitting.) Unlike woven fabric a knitted sweater or other garment can be fitted to the body as you knit. Of course you can’t cut knitting without securing the edges or it will unravel hence the reason for knitting each piece to a specific shape. But furthermore, yarn can be manipulated in many different ways on the needles to conform it to tubes, curves and extremities. That’s such a big advantage over cutting and sewing that it seems silly to ignore the possibilities.

In my opinion, knitting in pieces was encouraged by pattern publications in the past because the editors didn’t understand what knitting could actually do differently than sewing. People pretty much followed instructions slavishly without really understanding it either. Elizabeth Zimmermann reported that her circular patterns got rewritten to flat in spite of her protestations. Her books were the first I ever read that showed me that there even was another way to knit a sweater! Another big thing was the invention of good functional circular needles. The ones I bought when I was young (and still have in my collection but never use!) sport stiff plastic wires that never lose their coil no matter what you do. Today you have any number of choices in wood, bamboo, brass, chrome, carbon fibre and even Lexan – all with flexible cords and smooth connections. No wonder one-piece knitting is becoming commonplace! Really, who uses those long straight needles anymore for any type of knitting anyway? Mine are all languishing in a box, the poor neglected creatures.

OK, off in a different direction. No new news about The Hand. I think I’ve hit a plateau in the healing process which is a little lot frustrating. Still too tender to hold a weaving shuttle or do much ironing (which kind of stymies sewing for now) or basically any time I have to grip something with my palm. (Who knew grinding pepper was difficult?) However, otherwise it’s mostly functional and I can knit and spin. With Thom’s help I’ve got quite a lot of the RomneyX wool carded and ready to spin up. Maybe not a whole man-sweater’s worth yet but a good start. We’ve also been getting out for walks as much as possible when the weather permits which doesn’t leave as much time for moaning. Yeah, life’s tough, eh? At least I’m not bored.

Very nice little shawlette! And very pretty yarn too. You should be proud. And you're a hellofalot more adventurous than I.

Your shawlette is lovely. You knit and crochet beautifully! And you get more done than I ever will.
Sorry to hear your hand isn't totally better. I can imagine it's quite frustrating to not be able to do the things you want to do. Obviously more time is needed - but patience can be hard to come by!

Thanks for the encouragement, my dears! I so appreciate it. I just have to find more patience and get on with things I CAN do, right? After all it could be worse. It WAS worse! And it will be better eventually.

Very purrty! And yes, I knit everything on circs, even if it is something flat. I just like the way the weight of the project stays in the middle, much easier on the old shoulders.