I think it turned out very cool! And the best thing? It sounds really nice when played. Sorry my strap is really tiny in the photo so you can’t really distinguish the pattern that well. Plus the kumihimo braid I made for the neck tie. Those leather ends gave me conniptions though so maybe I’m glad you can’t see it too closely! The guitar is to be submitted on Wednesday so we just made it under the wire. The display is entitled “West Coast Synergies: fibre + wood + metal + clay” and will be at the Roundhouse Community Centre, Vancouver, from May 1 – June 30th, 2015. And no, the guitar is Not For Sale! If you’re local we’ll be at the opening reception Sunday, May 3.

You may be wondering about the title. It came about while I was supposed to be sleeping one night. Here’s our Artists’ Statement:

About the guitar. Turn the wood, cut, drill, sand and polish. Turn the weaving tablets and turn them some more. Turn the bobbins on the braiding stand. Turn the guitar (it’s a lefty!). And hear the fair music as you play.

Does that help at all? Artist’s statements are kind of silly anyhow.

Now that that’s done (yay!) it’s on to new pastures. Firstly, another FO: 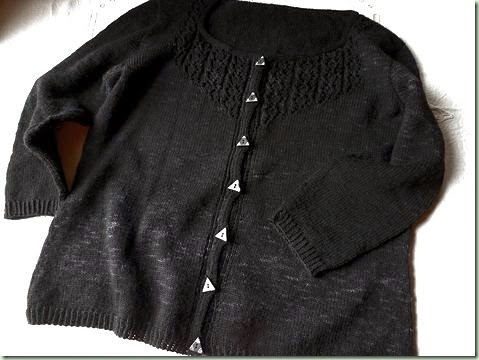 Comments:  This sweater must have actually been knitted twice for all the pulling out and re-knitting I did on it! Some of it was my fault (knitting black in winter, doh) and some was not. There was an error in the pattern for where to begin the chart for size L. I tried to message the designer but never did hear back. Oh well. I figured it out anyhow. I also managed to miss the one row of garter stitch after the bottom ribbing so I left it off the sleeves as well. The i-cord finish on the neckline and fronts was tedious but I quite liked the look when it was done. It was easy to leave the right size buttonhole for my Maiwa bone triangle buttons.

I had been worried that there wasn’t enough of the dyed yarn to finish but I still had a wee ball left at the end. It helped that the body and the sleeves were shorter than the pattern. Now that it’s done I love the fit (close but not too tight) and hope to get a lot of wear out of this cardi.

So of course I immediately got started on a new cardi! Several of my friends and I went to the Sweet Georgia yarn sale on Saturday and I immediately found a BFL sock yarn in the semisolid colourway “ginger”. It apparently was a mis-dye so half price but you couldn’t tell it by me. I think there was too much red on it which only makes it better in my opinion: 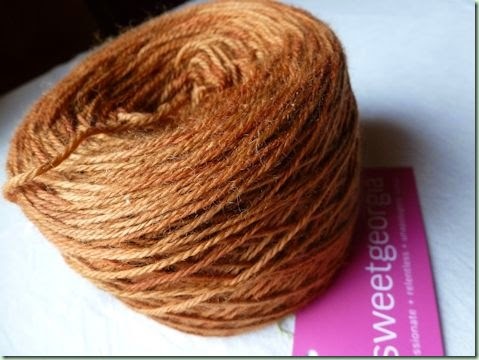 Even though it’s acid dye of course, the colours resemble cutch with a splash of madder. Sorry, I had it already wound up in balls before I remembered to photograph it!

The sale was quite crazy and Felicia, Sweet Georgia herself, was shocked at the line-up outside the studio. Her face was so funny! Mr. Sweet Georgia was manning the door and letting only a few in at a time. (Also feeding us brownies to quiet the masses.) I think half the yarn was gone by the time we got there and squeezed inside the tiny space. But I found the yarn of my dreams right away so I was happy! It’s already on its way to become a Candelia by Cecily Glowik MacDonald: I didn’t actually copy her original colour on purpose but it sure looks like it, doesn’t it? What I love about this sweater are the cute pockets and the peplum on the back: Adorable huh? I think I’ll make it a smidgen longer though. And I have the perfect clasps and buttons in the stash. I think this must be some kind of speed record for me buying yarn and using it. Here’s how I spent Earth Hour on Sunday night: 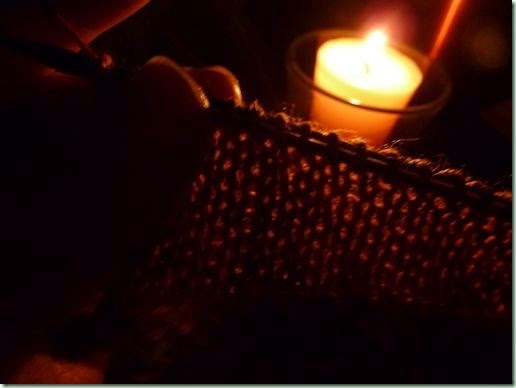 Winding skeins and knitting a swatch by candle light. Earth Hour makes me appreciate electricity soooo much! I did cheat a little though. I didn’t turn off the lights on my wee seedlings: 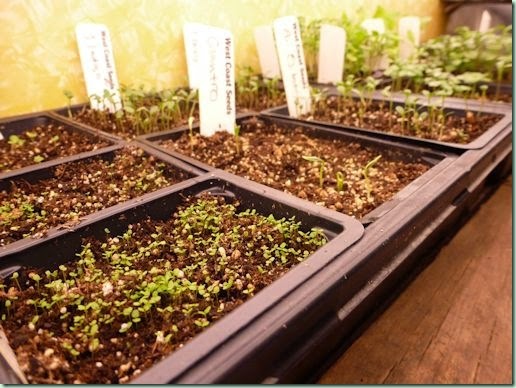 I’ve already cast on for the sweater and am cruising down the yoke. Hopefully this goes faster than the black cardi did. So how many sweaters does a damselfly need? Not nearly as many as she wants! I’m obviously on a roll. More on the spinning project soon too - which will be yet another sweater. Ha!

Now I’m off to buy some fruits and veggies.

your collaborative effort looks wonderful - going to try and make it over for the exhibit. My seeds are coming up,too. Love this time of year.

And I really like the peplum on your new choice. Have you seen "Harriet's Jacket" by Elizabeth McCarten(ChezLizzie@Blogspot.com)?? Has a lovely peplum & a nice shawl collar.

Oh, I hope you can get over to see the exhibit, Jean!

And thanks for the kind words, everyone.

The guitar is fabulous - and the statement is very clever! And the black cardi looks very classy. Will you show us a picture of you wearing it?

You need to come and take photos for me, Heather!