Take A Load Off, Granny

I’m exhausted! For the last few days we’ve been making a major push to get the majority of the garden dug, weeded, composted, planted and generally readied for summer growth. Thom & I are finally over our recent colds and have our usual amount of stamina back. The weather is perfect: warm and cloudy. I know it’s not everyone’s cup of tea but we both love to garden. It’s creative and satisfying and good exercise as long as you don’t overdo it. Hah.

I think my plants are actually zombies not as badly damaged as I first thought. For the most part they’ve come back from the dead, somewhat the worse for wear thanks to the recent hail storm but recuperating nicely. Sadly the rhubarb in the dye garden is now inedible: 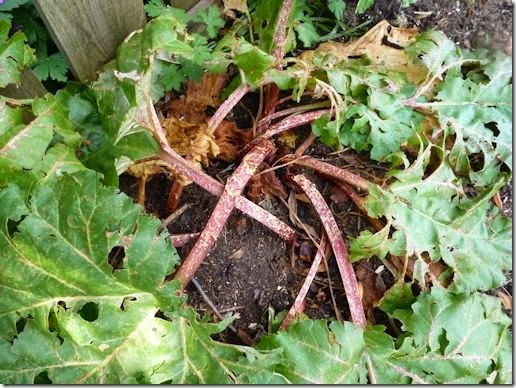 Hopefully it will survive to come back next year and I did get one last harvest from the larger patch in the back garden which is in better shape. The salad greens (and reds) are growing back after I trimmed off the most damaged parts. Here’s the Cimmaron lettuce: 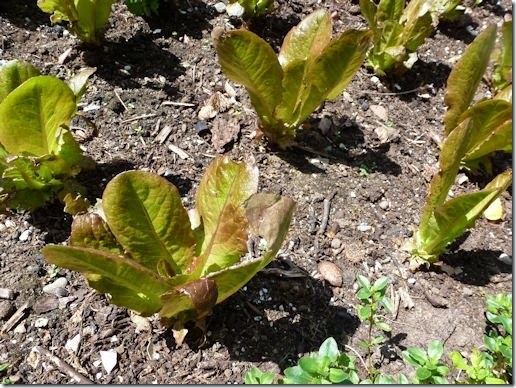 So pretty. Hard to believe it was smooshed into the ground only a short while ago! I worked hard the last few days to get the squashes and cucumbers in and the greenhouse ready for the tomatoes: Yeah, I tend to overplant them but I try to fertilise enough to make up for that. These are indeterminates (Juliet & Black Cherry) and grow very tall. Soon it’ll resemble a jungle in there!

The “back 40” is looking much better finally: 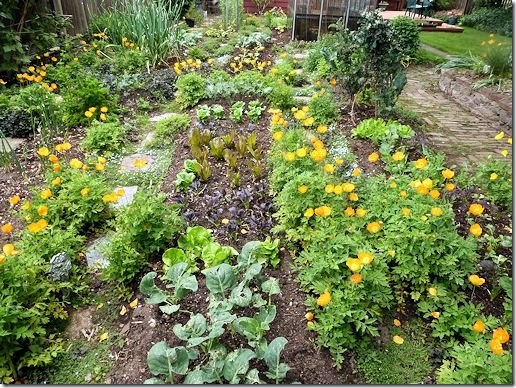 We really have a plethora of Welsh poppies, don’t we? They aren’t edible or dyeable but Thom likes them for colour. I try to keep them to the edges of the pathways where they won’t be in the way. Too much.

In the dye garden the Japanese indigo is growing back: 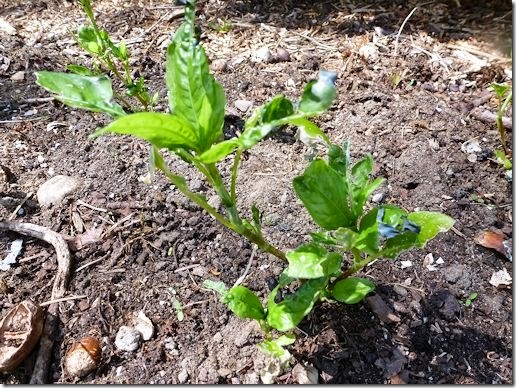 You can see the blue in the damaged leaves. Luckily they’re pretty tough little dudes and grow quickly, especially after a drink of fish fertiliser! Yum.

The single woad plant that I left to flower is starting to develop seeds: 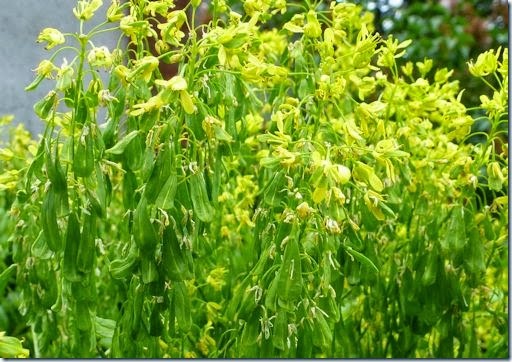 They will turn blue-black as they mature. They look like little tongues, don’t they? Pfthhhh… This plant is taller than my head now and the flowers smell really nice. I know it’s considered a noxious weed in many places but mine are well-tamed and quite legal in BC. I’m very fond of my woad! Even if the Japanese indigo does have more blue in it.

So what else is new? I’ve only got about 3 inches left to knit on the Mia Tunic. The rows are really long (nearly 300 stitches around) so it’s taking me awhile. Plus I haven’t had that much time to knit! I also started a tea cosy for my daughter but it’s not easy or relaxing to knit. I don’t dare start anything else yet or I’ll never finish what I’ve already started! The sewing machine is calling me too but it’s not going to happen until the big garden work is done and we’re down to maintenance level. Soon!

oh my lord, i had forgotten how fast things grow in BC.......mine are just seedlings--and seeds---here in calgary!

lush and lovely, and i too love those poppies, we have them in bloom everywhere as well, with only i of the orange ones popping up this year!

Well, plants start earlier but they do take quite awhile to mature. We don't always have the sunshine and heat. Calgary has the oddest weather though, doesn't it? Last time I was there we drove through a huge thunderstorm. Yikes!

Yay! Your garden is a miracle! Hooray for nature's resiliancy (and boo for hail.)