But I’m trying hard not to complain too bitterly about it. It’s not like I could shift that big blob of HOT that’s stuck just off the BC coast! It is what it is. It also was 32C (90F) yesterday and heading for that again today. At least my hot weather veggies are enjoying it – as long as I can keep them from drying out too much. I picked my first cucumber of the season, the beans are flowering and the spaghetti squashes are bigger than softballs. The dye garden isn’t doing too badly either. So far I have a Ziploc full of nicely dried dyer’s chamomile. The Sauce Hollandaise variety looks like every other daisy-type flower you’ve ever seen: 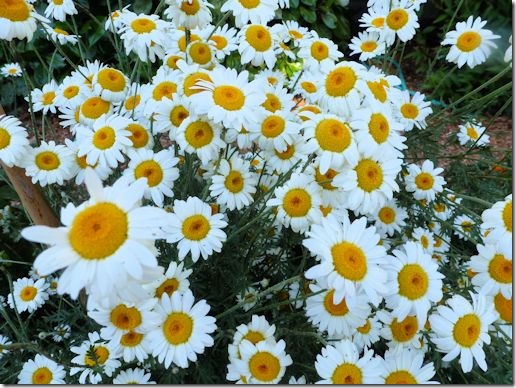 Their little faces are about an inch or so across. After I picked them they dried very quickly to crisp little buttons: 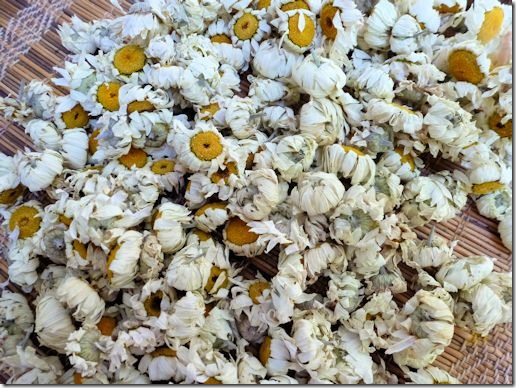 (Luckily you can’t see the dried aphids!) I picked a bunch more last evening so hopefully now I’ll have enough for at least one test dyebath. As soon as I around to getting some yarn mordanted, that is.

There’s not nearly as much of the dried grandiflora coreopsis: 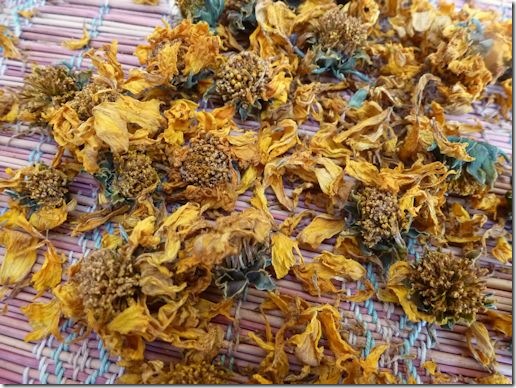 That is all I’ve got so far. There’s only 2 young plants so I’m not surprised at the lack of volume. Collection is ongoing.

What’s next? I’ve been avoiding the studio as too hot even with the big swamp cooler/fan on. I’ve managed to cut out 2 dresses though not even begun to sew them yet. There’s the Mizono dress/jumper/tunic/bubble-thingy, V1410: 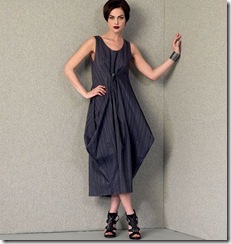 You can see it better in the line drawing: 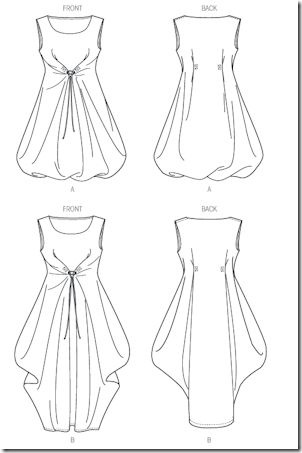 The 2 views are the same dress but it has buttons underneath so you can adjust the drape to tunic length. I cut a size 12 (again, not remotely my pattern measurements!) and also re-drew the shoulders and armscyes to fit me better. I raised the neckline quite a bit too. You can see it gapping badly on the model! I figure I can cut it down if it’s too high but not add to it if I cut too low. I cut some self bias binding for the armholes and neckline instead of just turning under a hem and cut some big square patch pockets. (Because I love pockets!) Lastly I shortened it at the lower lengthen/shorten line by 2”. It’s still going to be pretty long on my 5’3-1/2” (and shrinking) body but I didn’t want to lose too much of the bubbled side seams. The fabric is a black slightly-crinkled rayon with lovely drape. I’ve had it in the stash for ages and it has changed its mind about what it wanted to become at least 5 or 6 times. Ha-ha! It’s committed now! 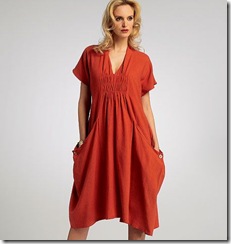 Here’s the line drawing, View A: 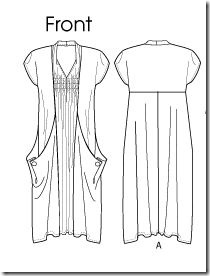 Mine is going to look very much like the photo because I’m using a red-orange stretch linen blend. This fabric tried to change its mind about what it wanted to be a couple of times but I didn’t allow it since I actually bought it specifically for this pattern! Heh. I cut a Medium and raised the neckline an inch. Again I can cut it down if I think it would look better as drafted but I’d rather have the extra fabric there in case. I think I might have to adjust the gathers in front down a little to compensate for my low bust, though I’ll judge that when I get there. Other sewists don’t seem to have messed with the gather height at all though I may also use a different technique to gather them than the instructions say.

Interestingly the Mizono dress is only 2 large pattern pieces but it still took more than 2.5 metres of my 56” wide fabric. (Like the way I slip from metric to imperial in the same sentence? I’m bi-measuremental!) The Tilton dress has her usual odd pattern pieces but this time not asymmetrical ones. I cut the pocket facings out vertically with the stretch running up-and-down thinking that that would stabilise them a little. They are rather voluminous! And Marcy does that with her knit version View C. I’m hoping to finish this dress in time to wear it to a family wedding next week.

Which brings me to a dress that my DIL bought from a thrift shop that fits her perfectly except for where it flares right under the arms. I thought it would be a quick repair but the odd way the lining has been stitched in as necessitated lots of unpicking and possible hand-stitching. I’ve been putting it off but since she’s planning to wear it to the same wedding, I’d best get my rear in gear. Today.

In other news, we took down the display at the Roundhouse Community Centre yesterday. Thom happily got his guitar back and he serenaded us while we packed up the rest of the items. We have re-submitted the cigar box guitar to the Crafts Council of BC for a show in Crafthouse in November. We’ll find out in a couple of weeks if Thom has to give up his guitar for awhile again! Meanwhile, he’s enjoying playing it again while he can. Who knew it would be so popular? On the way home from the Roundhouse yesterday (uphill in 30C heat) we stopped at a shady bench at City Hall to cool for a few minutes and a guy walking by asked about the guitar. Thom let him try it for a bit. (Upside down! It’s a lefty!) He wanted Thom to show him how to build one! LOL!!! Sure thing, bub. Five minutes, tops. Right? Ummm…no. Do your research. Take a class. Put in the time to learn. Just like I’m going to casually teach a total random stranger how to spin and knit a sweater? Just like that.

Anyway, to all my Canadian buddies, hope you and yours have a Happy Canada Day tomorrow! True North strong and free! (Free of Harper would be good too, but I’m not holding my breath.)

dear Damselfly - I thought you liked summer to flit around from flower to flower. love the look of the second dress. Stay cool, happy holiday!

The weather has been so hot I haven't even been on the computer. Hope the cooler weather now has hit the mainland. And next Canada Day we can celebrate Harper's departure.

Hey, I have both those patterns and made them both up. Tons of the Tilton one out of old tablecloths, as you know. The sizing runs really big. Other than that, I did them just as it says. So comfy. By the way, we've been having your Vancouver weather here in Chicago. It's 60 again today with rain forecasted. It's been the same for the last two weeks or so, which is really unheard of at this time of year. Nice. Hope it gets back to normal by the time I arrive there. Looking forward to meeting you for real. Maybe we can sneak sewing rather than shopping some of the time...

Hey, pao! Yup, I did pick a smaller size for both dresses so they will fit me just right. My frame is too small for super-oversized clothes even though my middle is much more well-upholstered. :)

Sorry you've been getting our chilly rain! Want to send it back home where it belongs, please? Oh yes, I'm so looking forward to meeting you for reals in a couple of weeks. I'll be sending you a PM to discuss plans.