The end is nigh! And then we can get back to crafty things. Whoo-hoo! Probably not so many pretty pictures though. You wins some and you loses some, doncha?

So I last left you in the lava beds in Craters of the Moon. From there in the middle of Idaho we travelled west to the next state, Oregon. We camped at one of our usual halfway spots, Farewell Bend State Park which is right on the Snake River which here marks the border between Idaho and Oregon. It was still quite hot and it was a long drive so we didn’t do much but relax in the shade and read for the rest of the day.

The next night’s stay was on the Columbia River Gorge with a grocery stop in between at the fine Safeway in Pendleton where we finally got some wifi after many days of radio silence. That night we camped in Memaloose State Park which was very dry and somehow parked ourselves right next to the train tracks: 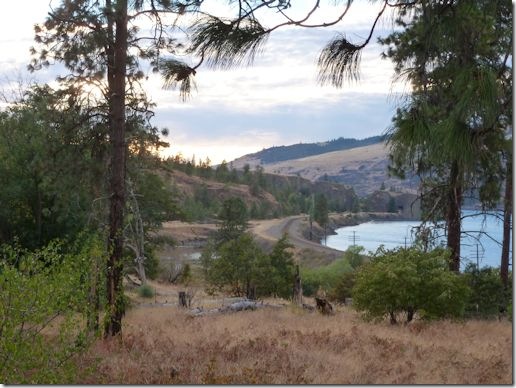 The trains also run at night and they are on both sides of the river but we were tired enough that it didn’t keep us awake much. Which was lucky because the next day we needed our wits about us as we navigated the wilds of Portland’s freeways in the pouring rain! That was the only time it rained on us so much for the whole holiday. I only got us lost once as I looked away from the road signs for just a second and we accidentally detoured over a bridge toward downtown. Oops. We were of course making a run for the Mill End Store in Milwaukie so a quick rotation around and back across the bridge then straight on ‘till morning down the east side of the Willamette River where we had meant to go all along. Sadly we weren’t able to get to the Pendleton Woollen Mill shop though because it was on the wrong side of the road! Darn. (We would have had to navigate around and come back north to access it.) But I did enough damage at Mill End where I managed to get just a wee bit carried away in the wool and linen sections. More on that later (when I locate what the heck I did with the photos).

We explored more of Portland than we had seen before on the way back north on the west side of the Willamette which divides Portland down the middle. We were aiming for the highway that travels along the Columbia toward Astoria since we hadn’t taken that way before. Luckily Thom had not only googled the directions when we had wifi but actually photographed his computer screen with his iPhone so I could read the maps and we were able to navigate correctly. Otherwise we might still be wandering around Portland. Hmmm…maybe not a bad thing?

We’ve been to Astoria at the mouth of the Columbia a number of times but we hadn’t come in from the east before so we enjoyed the different perspective from that angle. You don’t view the river much along here though. (It’s much better back in the Gorge.) We were heading for Fort Stevens State Park at the very north-western point of Oregon where we stayed for a couple of days. This time instead of exploring the seashore we hiked around Coffenbury Lake: 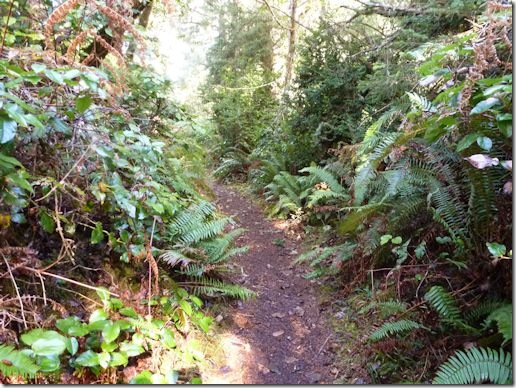 All that greenery! It was so lovely to be back among the familiar plants (sword fern, salal, salmonberry, western red cedar, hemlock and fir) of our West Coast climate. It had been a long time since we felt so damp! Sigh. Not that there’s anything wrong with sagebrush, juniper and bunchgrass, mind you. But it just doesn’t feel like home, you know?

When we left Fort Stevens we headed back through Astoria but before going north over the bridge we stopped at the Safeway for a few more groceries. What did we hear from the parking lot but sea lions barking from blocks away. It turns out they are (depending on your point of view) either a fabulous tourist draw or the biggest herd of pests ever! They’ve taken over the East Boat Basin and all the floats are covered in California sea lions: 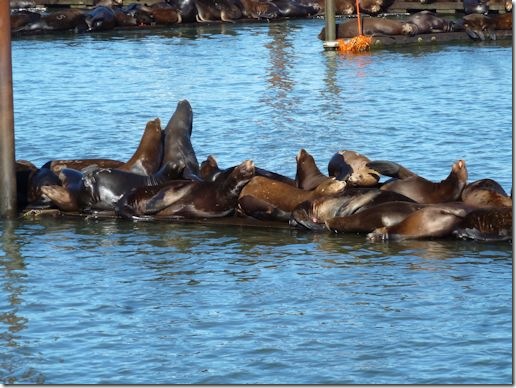 They are so noisy! And hilarious to watch. We stayed at least 45 minutes in fascination. They were piled up in heaps, except for a number of the males who definitely didn’t want to let interlopers into their territory. Resting, sleeping, barking and jostling for position in and out of the water: 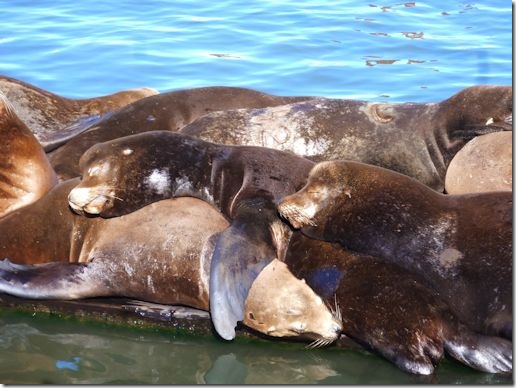 There were literally hundreds of them! The locals don’t know what to do. The combined weight is slowly destroying the wharf floats. The barking is driving the neighbours nuts. The fishermen are complaining the sea lions are stealing their catch. They’ve tried everything to get rid of them including a fake orca whale (a complete hoot and total fiasco!) and this is how the sea lions treat the attempt at a trap cage: 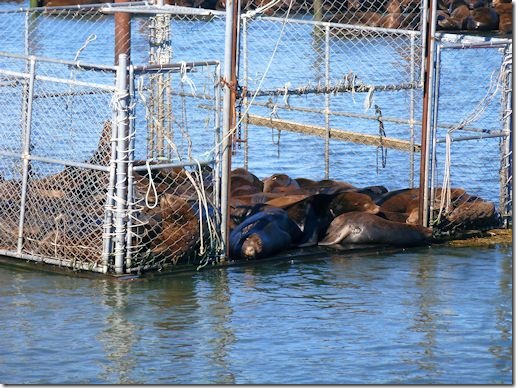 Can you say “total distain”? Snore. And of course there’s the Sea Lion Defense Brigade. I’d probably be one of them since I’m not trying to tie up my boat there or fish in the river. But I can kind of understand the opponent side too. (My ongoing battle with the Evil Squirrels makes me somewhat sympathetic.) They are pesky and persistent critters for sure. It’s a dilemma for which I have no answers. But definitely fun to watch.

Finally we crossed over the bridge into Washington and to the State Park on the other side of the Columbia from Fort Stevens, Cape Disappointment. We had only been here last February but we didn’t have a chance to visit the Lewis & Clark Interpretive Center last time so we made sure to check it out. It was really interesting because as Canadians we don’t really learn about the incredible journey that those explorers and their crew accomplished. I guess maybe because our country was on the other side of the territorial jockeying going on? The story of Sacagawea, the First Nations woman who helped guide, interpret and collect and prepare food for them was especially fascinating. She was actually the key to good relations with the native tribes they encountered because if they had a woman (and her baby) with them then the strangers were assumed not to be hostile. We had actually been following along the Lewis & Clark Trail, as well as the Oregon Trail, for much of our holiday so it was nice to finally understand more of the details of their journey.

The view down from the Center included the recently repaired North Jetty and several rocky islets covered in sea birds: 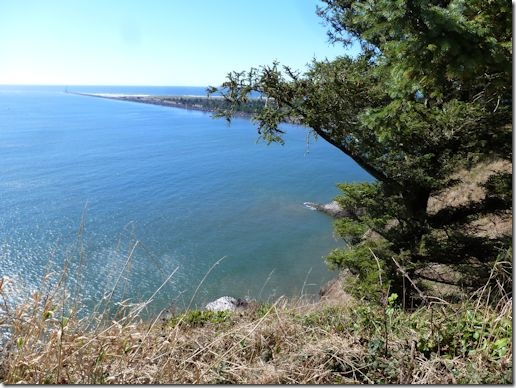 That’s a lot farther down than it looks! Those teeny dots on the white rock in the lower middle of the photo are cormorants which are not small birds. And the jetty is actually a mile and a half long out from the mouth of the river. We also got in a walk along the same Benson Beach as we visited in February though somehow this time of year it wasn’t quite as black. It always amazes me how much every ocean beach changes from one visit to the next.

And speaking of beaches, our next stop was further north in the Olympic National Park at Kalaloch (pronounced CLAY-lock): 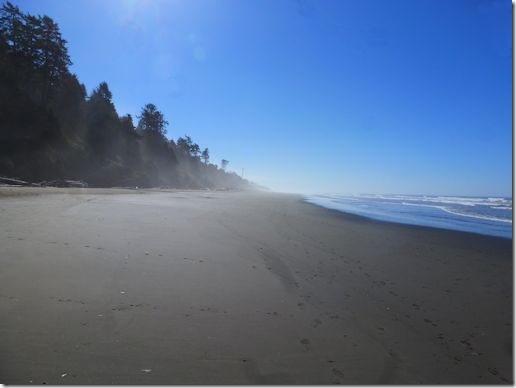 As you might notice the weather continued sunny and warm. We saw whales off the beach here and watched them for at least an hour. We weren’t sure what kind of whales they were and we thought they might be humpbacks until we saw one come straight up head first. The obvious light throat grooves were for sure California grey whales travelling south on their long, long migration back down to Baja California for the winter to breed and give birth. Here along the Olympic coast they were feeding and frolicking and generally having a grand time. Sorry no photos because they were so far out and so hard to catch with the camera.

We also saw a sea otter on its back in the kelp beds. Apparently they are coming back nicely after being re-introduced to the area. We’ve seen lots of river otters in the wild but this is the first ever sea otter. Very exciting. We also walked a nature trail in the rain forest here. It was lovely and if we wanted we could have collected some of the pretty orange chanterelle mushrooms that were everywhere. But there were several other people already on the hunt and of course we were in a National Park. I always feel uncomfortable about gathering plant material in a park.

After a couple of days at Kalaloch we continued around the Olympic Peninsula. It was alternating sunny and foggy which wasn’t surprising for this rain forest area. We decided to attempt to get a campsite in Fort Worden State Park at the east edge of the city of Port Townsend. They have two campgrounds there, one in the woods and one on the water with a view. Bet you can’t guess which one is more popular? Although it’s a state park, we found out that Fort Worden is now more of a learning and conference centre and the campgrounds are managed from the main office. We got a nice spot but was pricey! This is looking down at the main buildings from the Fort’s battery hill with the fog out on the water: 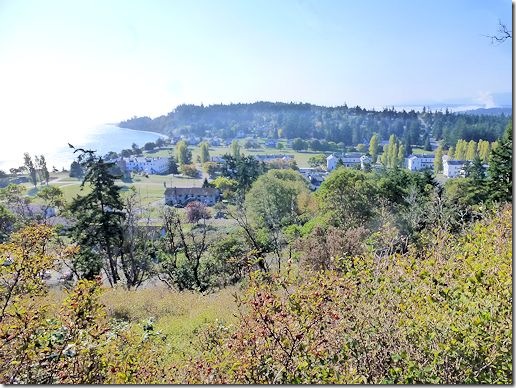 It’s a really pleasant place and very quiet. Of course couldn’t stay near Port Townsend without a visit to the historic waterfront area. I always enjoy checking out the shops, including two yarn shops and several nice clothing stores. I didn’t buy anything but wished I could have photographed several interesting pieces that I saw. We did have a yummy lunch in a Mexican restaurant though.

The next morning we had awhile before our ferry to Whidbey Island so we explored more of the Fort’s old gun batteries and other remains of its long military history. The Fort was begun in the late 1800s and added to over the decades afterward, especially when war was eminent, though it never fired a shot at an enemy. The concrete bunkers were really extensive and very cool to explore: 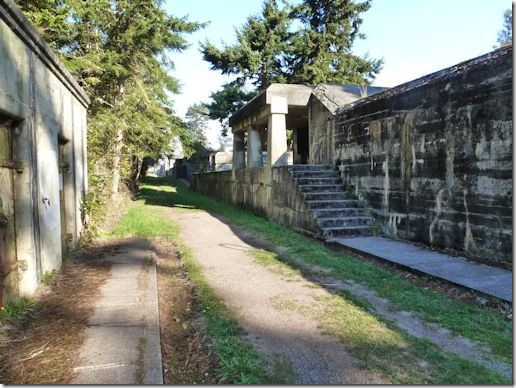 They had the funkiest rusty doors everywhere: 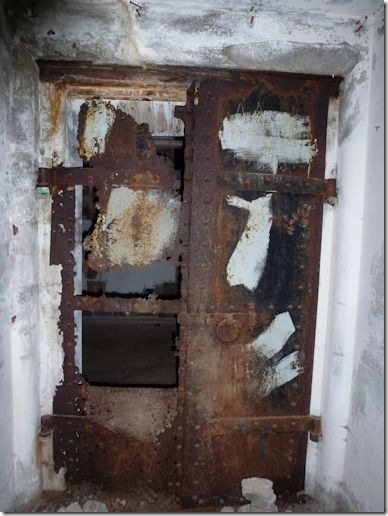 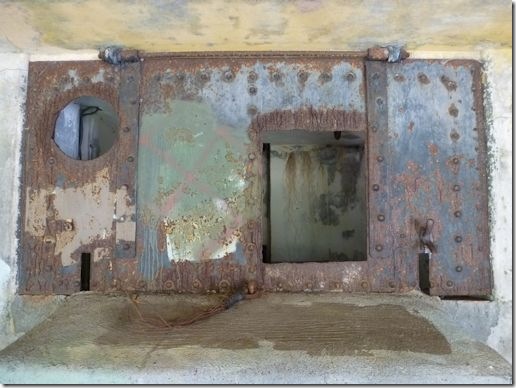 Inspirational, no? I have many more of these! And then there’s the corridors, tunnels and stairways: 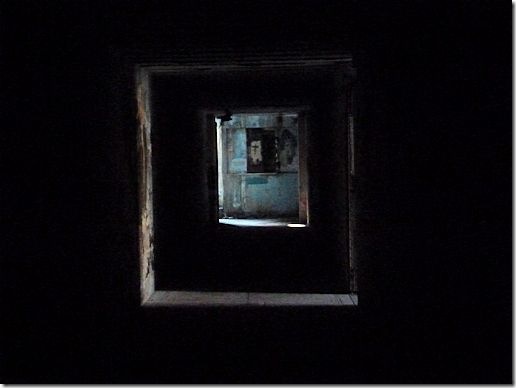 Atmospheric. We had a blast! But soon we had to catch our ferry and head home. The border crossing was quite uneventful (thankfully) and there you go. Finally. Forty days of really great travel, lots of exciting sights, miles of hikes, a wee bit of shopping and the best weather we could ever expect. I call that pretty darn perfect!

So here we are at the end of the long saga of our 2015 trip. I wonder where we will go next year?