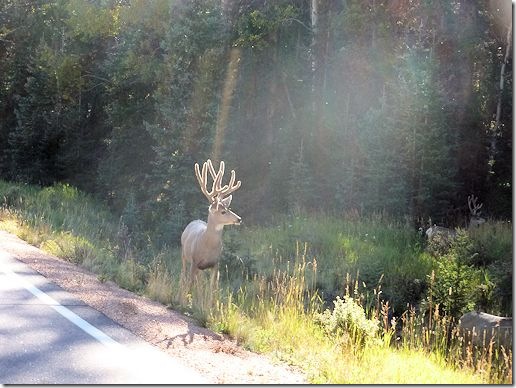 Of course I only managed to capture two. Can you spot the second one? Now we were heading back west but first a little south through legendary Cripple Creek, known for its gold mining and…its donkeys: 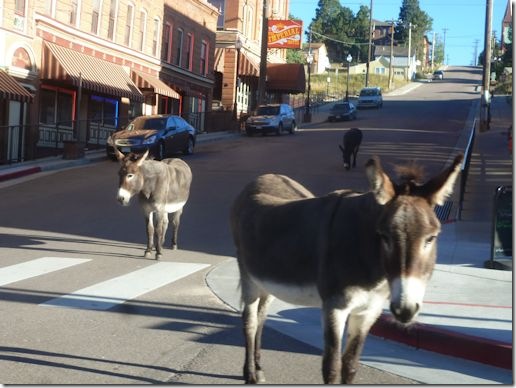 Yup. We thought they were a legend. Or there were only one or two but we saw more donkeys than people during our early morning pass through town. This semi-feral herd are descended from the ones the early miners used and are cherished as the official tourist ambassadors for Cripple Creek. We were laughing so hard we could barely drive by.

However, we didn’t stop. We were on our way to a grand canyon. Not the Grand Canyon, but a pretty impressive one nonetheless: 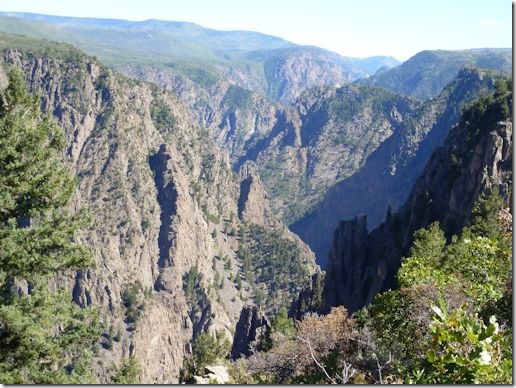 This is the Black Canyon of the Gunnison in western Colorado. It’s about 2,000 feet deep and very narrow at the bottom: 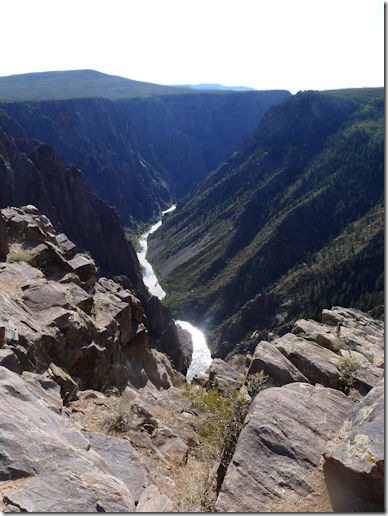 Can you see why they call it “black”? We stayed here for a couple of days, driving up the canyon rim road and checking out the sights. That pesky smoke that was following us around eventually moved back in though and obscured some of the view. The campground, although lacking in fancy amenities (as in most National Parks), did come with deer and a large flock of sage grouse: 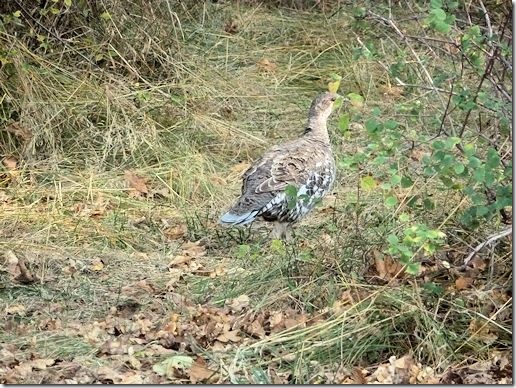 Blends in rather well, doesn’t she? They were very brave and let you get fairly close. Good thing dinner wasn’t on my mind, huh?

Next we were on to Utah and back into more familiar territory: 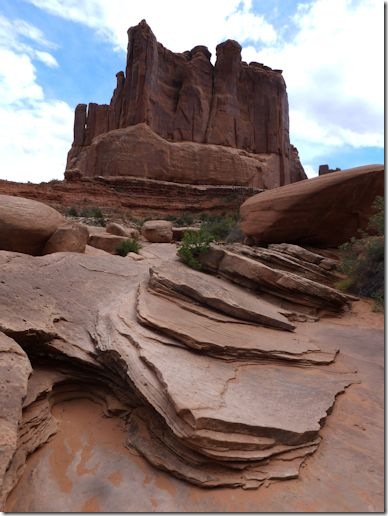 This is the Park Avenue trail in Arches National Park, which we walked both ways. On the way back it started to rain. If you look carefully you might be able to see the drops on the trail. Yes, that slick rock is indeed the trail! Oy. I have had issues with slick rock trails in this park. Some of them were made for mountain goats, not little old ladies like me! But this time when I got stuck on the trail while visiting Broken Arch, we got smart and went around the part that was too steep. Down a wash, around a corner, across a few feet of sand, over some relatively flat slick rock and I was on the other side of the arch! Hah.

This time we went to visit a few arches that we hadn’t seen before. This one is Tapestry Arch: 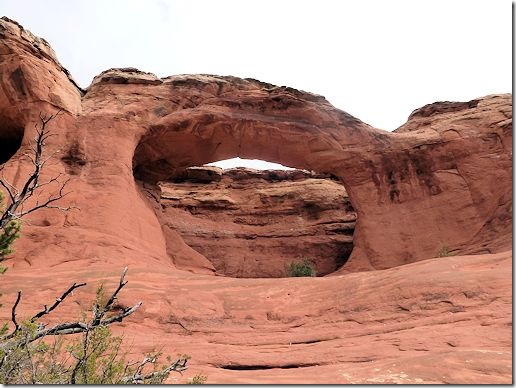 Not that big as these things go but the trail was fun. Again I tried to climb up that slope in front but didn’t get very far! Although my arthritic hip is much better, I can’t hoist myself up very well any more. And my balance is also crap. Sigh. The downsides of aging. Oh well. I did pretty well considering. And I didn’t really need to climb up there, did I? Here is Sand Arch: 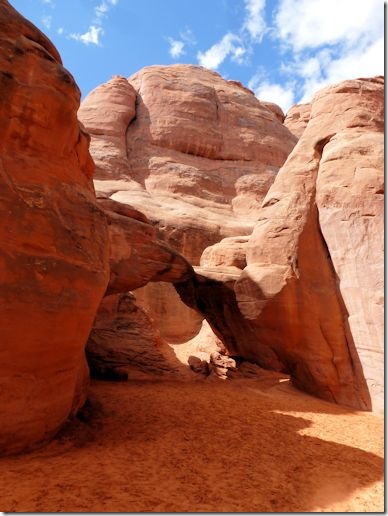 It’s the trail that’s sandy, not the arch. BTW, we watched a young man waltz right past the sign that said “No Climbing” and proceed to attempt to climb up there. Kind of like the young woman with her large dog we saw who walked right by a sign that said “No Dogs on Trails” that same day. Sheesh. What is it with people? Rules only apply to everyone else? It’s not like you even need to be able to read, what with pictograms and all. Dog with a circle around and a line through it. Not clear enough?

After Arches we went to our favourite place in Utah, Capitol Reef. We picked apples and pears from the orchard right next to our campsite, hiked up to Cohab Canyon and also walked the Grand Wash trail, this time from the north end: 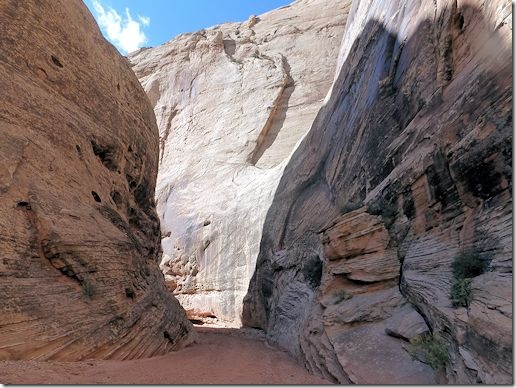 That’s definitely the prettiest way to do it. As always, I was absolutely fascinated with the tafoni, aka honeycomb or Swiss cheese rock: 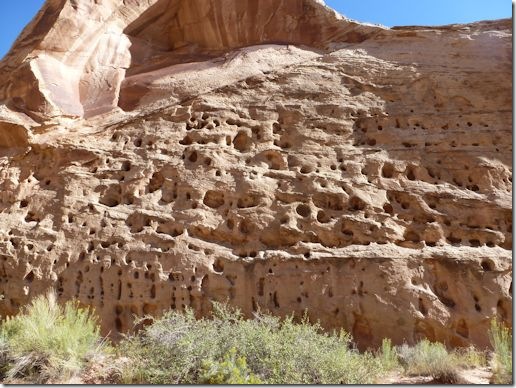 I think I need to design a lace knit pattern using this as inspiration, don’t you think? I have lots of interesting photos of it.

We also visited the petroglyphs, although the light wasn’t good during the sunny afternoon for photos: 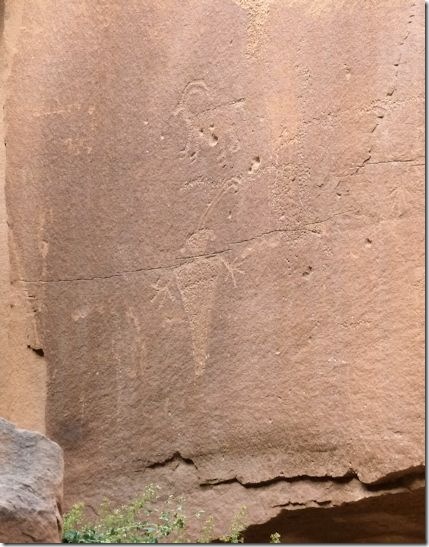 At least you can see the bighorn sheep and the cool dude below with what looks like antennae. Interestingly sometimes you can see the details better in the pictures than in real life.

And speaking of real life, I’ll have to leave you here because we have a big family dinner tonight at Thom’s brother’s for our Canadian Thanksgiving. I’m going to ask everyone my usual question: “What are you thankful for this year?” We’ll eat turkey and stuffing and pumpkin pie. Looking forward to it! I’ve missed my family – we haven’t seen them since mid-August.

Back soon with the next part of the story. Wishing all my readers on this side of the border a very Happy Thanksgiving! I know there’s always something to be thankful for. I have a huge list myself! And it includes you.

I can't wait for Part IV. I like your travelogues & look forward to seeing all the places you've been this time!!! Enjoy your turkey & family time!
And what am I thankful for??? I'm thankful to avoid family celebrations & the drunken antics that take place there. I'm thankful to remain independent & do what I want even though things don't work like they used to. And I'm eternally thankful for my friends, who call, laugh at me & still invite me to family celebrations.

Awww!!! Since most of our family doesn't drink, or drink much if they do, there were no antics. Only lots and lots of cris-crossing conversations and happy little cousins playing down in the rec room together. Absolutely lovely time had by all!

So not surprisingly the main answer to my thankfulness question was "family".