OK, admittedly that was a bad pun. But I finally have red! I know, I've been whining about it for ages now. The weather and the stars - or something - finally aligned and we had a window of opportunity to dig up the madder bed: 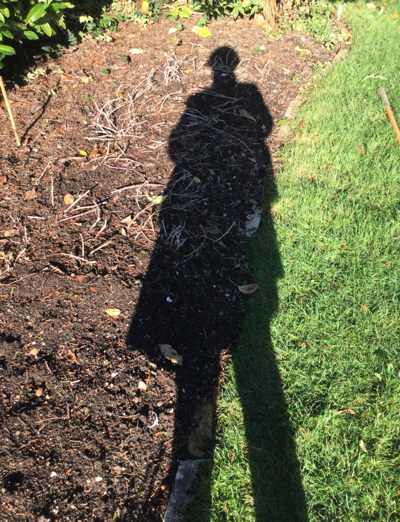 That was yesterday. Note sunshine. Thom had already cleared the tops for me. I know you can use them for dye too but the colours you get are subtle, mostly rosy beige, and that wasn't what I was excited about. We spent a backbreaking day digging up the bed and separating out the juicy madder roots from the rest of the ones that also had the last three years to get comfortable in there. Mostly from the laurel bushes nearby plus a few weeds. The madder is easy to separate. It's brittle and reddish and if you really aren't sure just break the root and it will show bright yellow-orange.
I separated out the crowns as we went though I knew we had more than I needed to replant the bed. In the end I used 16 of the best ones and increased the madder bed a few feet longer. Here they are all tucked back in: 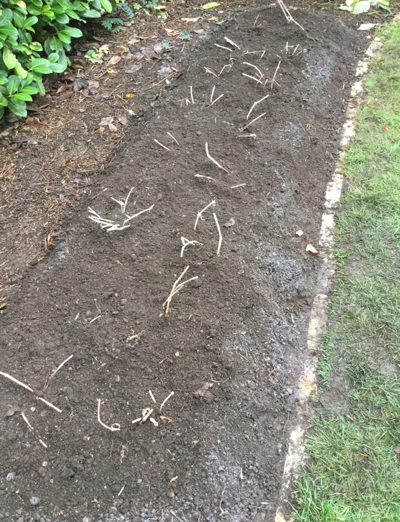 A little lime, a little bonemeal for the roots and everybody's happy. Especially me! I got a huge bucketful of these lovelies: 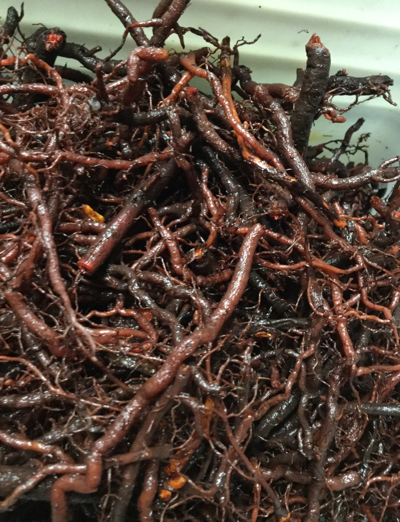 Three and one-third kilos of them to be more precise! The most ever. It's going to take ages to chop them up and dry them without hurting my hands or getting blisters. As it was, I began by washing them thoroughly under the outside tap this morning. It was cold, wet work but I got most of the dirt and fugitive dyestuff off. Then I weighed the results and began chopping up about 500g for my first dye pot: 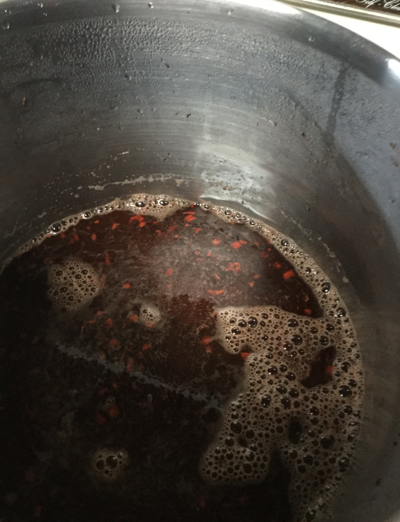 I poured the first extraction off through a cheesecloth-lined sieve and popped in 2 skeins of alum-mordanted superwash wool/nylon sock yarn (Plymouth Yarn Happy Feet). The dye struck immediately! So fast that the first skein is slightly darker than the second when it took me a few seconds longer to put it in the pot. The only colour left in the bath was a slight yellow tinge to the water. Yikes! Here's the results after an hour of heat (below a simmer) and cooling and rinsing: 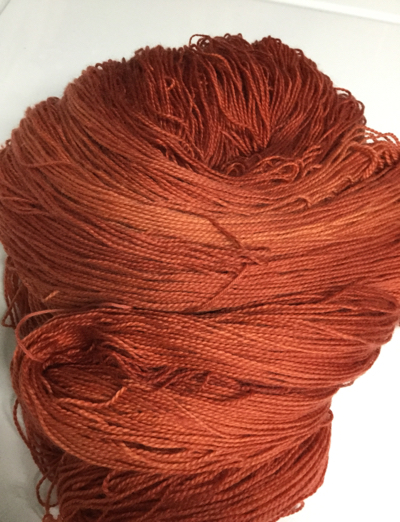 So pretty! A little uneven but that's exactly what I wanted. It's still damp so it will be a tad lighter when it dries. I'm calling it "Autumn Bonfire". I've done a second extraction too which is currently sitting cooling until tomorrow. Then I'll dye the Corriedale roving that I also mordanted the other day. I plan to use 3 modifiers: acid, alkaline and iron plus unmodified for 4 different shades. So. Much. Fun.
One more colour to show off: 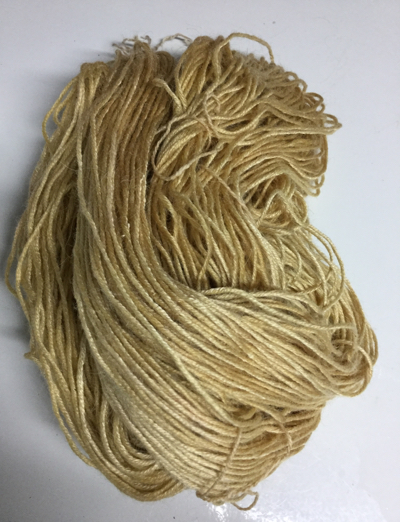 I actually have another half-skein of this yarn that we also dyed but it's still with my friend Kirsten at her house. Another whole skein is probably going into a pale afterbath of madder tomorrow when I finish dyeing the roving. More on my mad experiments soon. And no, I haven't had a chance to do any more sewing. A bit of spinning though. And of course some knitting. Moving right along.

love that red, your renewed madder bed looks wonderful- mine isn't anywhere near that tidy. I put my roughly chopped roots in an old blender on "chop" and it does a quick job of breaking them down.

Thanks! I've actually tried both my "craft" blender and mini food processor and had no real luck chopping these roots. They are big and tough! I need secateurs to get though some of them. They are usually easier to chop finer in the blender after the bits are dried crisp. I may have to resort to the dehydrator to get them really dry though. An ongoing process for sure.

Gee, Louisa, I haven't been by for a while and once again am overwhelmed by all you have accomplished. Amazing beautiful stuff. And belated Happy Birthday!

Thank you, sweetie! Some of the best things in life are well-aged...

i WISH WISH WISH i could grow madder here in Alberta, sigh.............those colours (and in the subsequent post) are yumshy!

Is it too cold for madder in the Calgary area? I've read it can be hardy to -29C but I think you can get down even below that, can't you? Here in mild (and soggy!) Vancouver I've had the temp go down to -10 C for a week without hurting it and we don't usually have any snow cover either. Alternatively I bet northern bedstraw would grow for you but the roots are smaller. Of course you'd have to find some to get started.